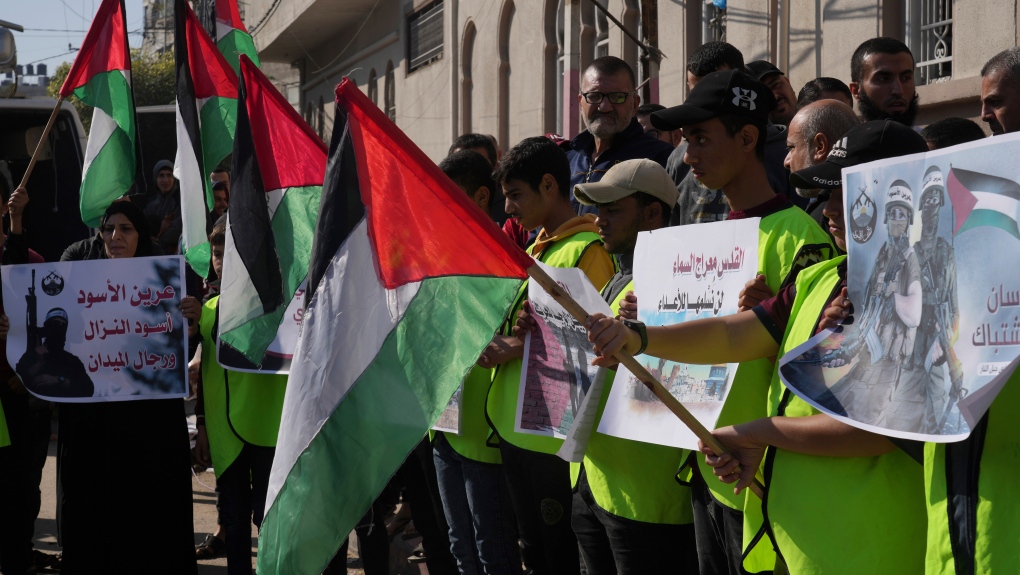 Hamas supporters wave their national flags during a rally in solidarity with Palestinian residents of the West Bank and Jerusalem, after Friday prayer in front of Salah elDein Mosque at the main road of Gaza City, Friday, Dec. 2, 2022.
GAZA CITY, Gaza Strip -

The Israeli military said the airstrikes targeted a weapons manufacturing facility and an underground tunnel belonging to Hamas, the militant group that has controlled Gaza since 2007. The military said more projectiles were fired over the border while warplanes were hitting the Gaza sites.

No Palestinian group claimed responsibility for the Saturday evening rocket, which landed in an open area near the Gaza-Israel fence. The border has been quiet since August's three-day blitz between Israel and the Palestinian Islamic Jihad, a powerful Gaza group that is smaller than the dominant Hamas.

Hamas and other factions have largely honoured the unofficial understandings that have kept the situation in the impoverished territory calm in exchange for thousands of Israeli work permits. Israel and Egypt maintain a blockade on Gaza to prevent Hamas from stocking up weapons.

"The strike overnight continues the progress to impede the force build-up" of Hamas, the Israeli army said.

Critics of the blockade say it is a form of collective punishment that harms Gaza's 2.3 million people.

While Gaza remained quiet, tension has been boiling for months in the West Bank, where the Palestinian Authority exerts limited self-rule in parts of the territory.

Israel carried out near daily raids that it says targets wanted Palestinians involved in planning or taking part in attacks, prompted by a spate of Palestinian attacks on Israelis in the spring that killed 19 people.

The military says the raids are meant to dismantle militant networks and thwart future attacks, but the Palestinians say they entrench Israel's open-ended occupation, now in its 56th year. A recent wave of Palestinian attacks on Israeli targets killed an additional nine people.

Sask. woman in critical condition after 'rogue wave' incident on honeymoon in Mexico

A Saskatchewan woman is recovering in a hospital in Mexico during what was supposed to have been one of the happiest trips of her life.

More than 1,000 Canadians have been, or will be, affected by layoffs announced by Canadian and American companies so far this year.

Prime Minister Justin Trudeau has called a group of protesters who swarmed him outside a Hamilton, Ont. restaurant on Tuesday a 'handful of angry people.'

DEVELOPING | Storm brings in heavy snow to Ontario, expected to bring downpour to the Atlantic

As much of Southern Ontario is hit with a powerful snowstorm, a mix of heavy snow turning into rain is expected to hit Atlantic Canada as the weather system moves further east.

Via Rail executives are set to address a federal committee today about the delays that plagued travellers over the holidays.

A 16-year-old boy has been stabbed on a TTC bus near Old Mill subway station, Toronto police say.

A First Nation in British Columbia has announced the discovery of at least 66 additional potential graves at the site of a former residential school where 93 were found last year.

Violent attacks on public transit have reached 'crisis levels,' the president of a major Canadian transit union said Wednesday, as he called for a national transit safety task force.