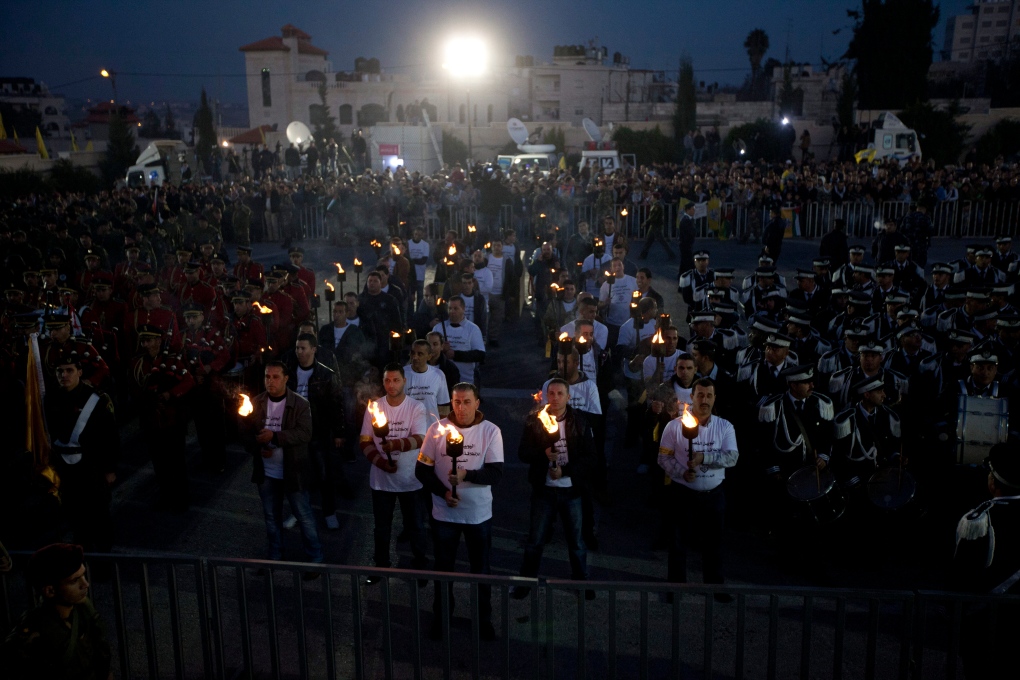 Palestinians hold torches as they celebrate the 50th anniversary of the Fatah movement in the West Bank city of Ramallah on Wednesday, Dec. 31, 2014. (AP / Majdi Mohammed)

JERUSALEM -- Israel halted transfers of the tax revenue it collects on behalf of the Palestinians in retaliation for their move to join the International Criminal Court in the Hague, Israeli media reported Saturday.

The Palestinians announced earlier this week that they are joining the International Criminal Court in the Hague to pursue war-crimes charges against Israel.

The move is meant to pressure Israel into withdrawing from the territories that Palestinians demand for a future state.

It's a risky strategy for the Palestinians because it means they themselves could be accused of war crimes over rocket attacks by the Islamic militant group Hamas on Israeli residential centres and other Palestinian violence against Jewish targets.

The move drew threats of retaliation from Israel and criticism from the U.S. government, which called it "counterproductive."

The daily newspaper Haaretz reported Saturday that Israel decided to withhold the taxes it collects for the Palestinians under the current interim peace accords and transfers each month to the Palestinian Authority. December's tax transfer is about $127 million, according to Haaretz.

An Israeli government official, speaking on condition of anonymity because he was not authorized to brief the media, confirmed the substance of the reports but refused to elaborate.

Israel has stopped tax transfers before but such freezes have been short-lived.

Withholding the funds is just one of several actions Israel could take against the Palestinians, including expanding West Bank settlement construction and curbing certain privileges. The U.S. has not said how it will react, but it provides hundreds of millions of dollars in aid to the Palestinians.

Turning to the international court at the Hague marks a major policy shift, transforming Palestinian President Mahmoud Abbas' relations with Israel from tense to openly hostile.

Abbas has been under heavy domestic pressure to take stronger action against Israel amid months of rising tensions over the collapse of U.S.-brokered peace talks last spring, a 50-day war between Israel and Palestinian militants in Gaza over the summer, a recent spate of deadly Palestinian attacks on Israelis, and unrest over access to a key holy site in Jerusalem.