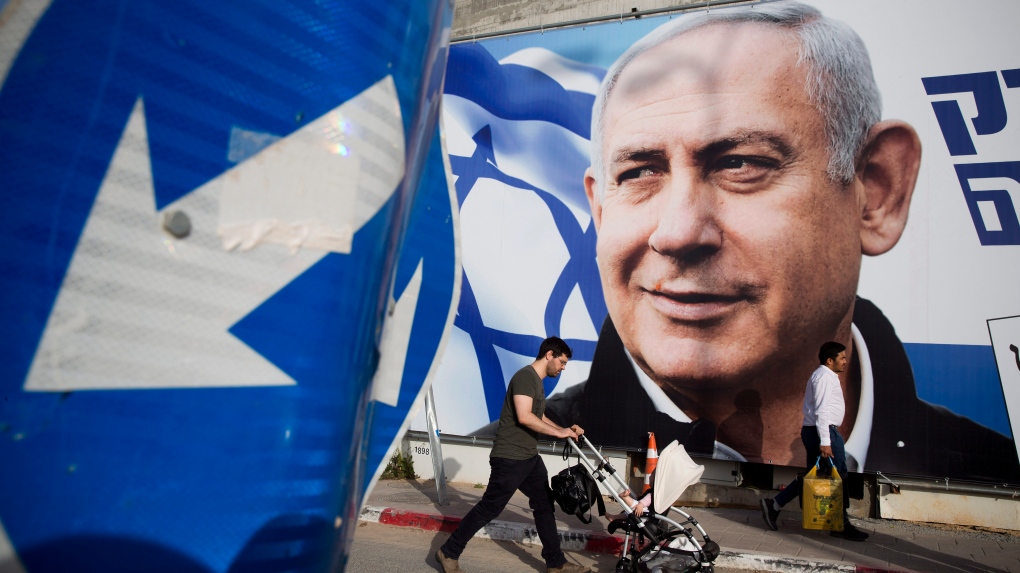 JERUSALEM -- With Israel heading to its third straight election, Israeli Prime Minister Benjamin Netanyahu has managed to buy some much-needed time as he tries to fend off a slew of criminal corruption charges.

But the embattled Israeli leader heads into the three-month campaign a shell of his former self, weakened within his own party, facing additional legal questions about his political future and squaring off against an increasingly popular opponent.

Netanyahu has been reeling since Israel's attorney general last month indicted him on charges of accepting bribes, fraud and breach of trust for allegedly receiving gifts and trading favours with the rich and powerful. That indictment was at the heart of the political standoff that triggered the new elections, and it is sure to be the central issue of the upcoming campaign.

"We are about to hold a third election because of the legal problems faced by citizen Benjamin Netanyahu," wrote Sima Kadmon, a commentator in the Yediot Ahronot daily.

Following Sept. 17 elections, neither Netanyahu nor his main rival, Blue and White party leader Benny Gantz, were able to secure a governing majority. With the two sides together controlling a solid majority of seats, the easiest way out of the standoff appeared to be a power-sharing agreement. But the two men deadlocked over Netanyahu's legal troubles.

After months of failed talks, parliament dissolved at a midnight deadline Wednesday, triggering new elections that were scheduled for March 2. It is the third election in under 12 months, after voting in September and April ended inconclusively.

Although opinion polls have forecast similar deadlock, the prospect of a new campaign offers Netanyahu a welcome breather from his legal troubles. Netanyahu is widely expected to ask parliament to grant him immunity from prosecution. But lawmakers in a caretaker government cannot rule on the question. That gives Netanyahu hope of mustering a more sympathetic parliament, while pushing the question of immunity, and the start of his trial, on hold until next spring at the earliest.

The Likud party has so far stood firmly behind Netanyahu, the country's longest-ever serving prime minister. But that support has begun to fray.

Gideon Saar, a popular lawmaker, has already announced he will challenge Netanyahu in a party primary scheduled on Dec. 26.

Speaking to the Kan radio station Thursday, Saar said that Israel's political system has sunk to a low point and after two inconclusive elections, Netanyahu is "stuck."

"We need a new hope. The country is going the wrong way. We need to mend the divide, to rehabilitate the public's trust," he said. "None of this will happen if we don't make a change."

Though early polls have indicated that Netanyahu will trounce his upstart challenger, Saar claims to have significant grassroots support. On Thursday, Kan reported that Public Security Minister Gilad Erdan, another senior Likud member, was considering endorsing Saar. There was no comment from either man.

Even if Netanyahu emerges victorious, a nasty primary challenge could leave him -- and the party -- weakened as it heads into the national campaign.

Under Israeli law, sitting prime ministers are not required to resign if charged with a crime.

For this reason, Netanyahu is desperate to remain on the job as he girds up for his trial. Netanyahu has used the post as a bully pulpit to accuse police and prosecutors of trying to stage an "attempted coup." During post-election coalition negotiations, Netanyahu could offer potential partners coveted Cabinet posts in exchange for their support for immunity.

The law, however, requires other Cabinet ministers to step down if charged with a crime. On Thursday, Netanyahu, who holds four other Cabinet portfolios notified Israel's Supreme Court that he would give up each ministry by the end of the year. The letter to the court, which was responding to a petition by a good governance group, stressed that Netanyahu would continue serving as prime minister.

The court rejected a request by the group to force Netanyahu to step down as prime minister. Yet it has instructed the country's attorney general to issue an opinion on a related question: whether he could be given the task of forming a new coalition following the next election. A negative ruling could disqualify Netanyahu from leading the party.

Reuven Hazan, a political scientist at Hebrew University, said that after more than a decade in office, Netanyahu is "weaker now than he ever was." Yet he said that if Netanyahu is forced out, it would be much better for him to be ousted in either a party primary or national election.

"To have him win an election and then have him removed by the legal process, that could rip the country apart," he said.

As he moves forward, Netanyahu is likely to continue with his attacks on the country's Arab minority, which have drawn accusations of incitement, and his claims that he is the victim of a grand conspiracy by the nation's "elites."

This message has resonated well with his base of working class, religious and nationalist Israelis. But there are signs that the broader support that has made him such a dominant politician for so long are beginning to soften.

Recent polls have indicated that Blue and White is gaining strength over Likud. They also show Gantz's personal popularity growing. The former military chief received a boost from his own party when one of his deputies, Yair Lapid, dropped a longstanding demand to rotate the party leadership.

"Gantz is entering this campaign in the best position he could hope to be in," wrote Yossi Verter, the political columnist for the Haaretz daily. "Gantz needn't do anything except be himself: statesmanlike, believable, level-headed and even sympathetic."

Matti Tuchfeld, a commentator with the pro-Netanyahu Israel Hayom newspaper, said the election is unlikely to resolve the country's bitter divisions and raised the possibility of a dreaded fourth election.

"The 2020 elections got underway yesterday -- but unless there is a dramatic change, we may perhaps find ourselves with second 2020 elections," he said.