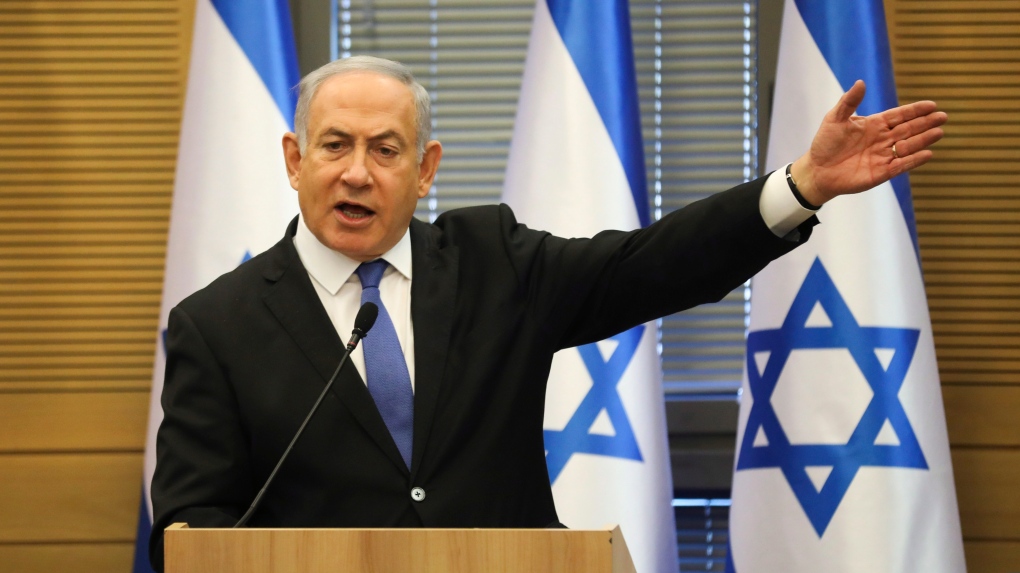 In this Wednesday, Nov. 20, 2019 file photo, Israeli Prime Minister Benjamin Netanyahu speaks during an extended faction meeting of the right-wing bloc members at the Knesset, in Jerusalem. (AP Photo/Oded Balilty)

Capping a three-year investigation, Attorney General Avichai Mandelblit charged Netanyahu with fraud, breach of trust and accepting bribes in three different scandals. It is the first time a sitting Israeli prime minister has been charged with a crime.

Mandelblit rejected accusations that his decision was politically motivated and said he had acted solely out of professional considerations.

"A day in which the attorney general decides to serve an indictment against a seated prime minister for serious crimes of corrupt governance is a heavy and sad day, for the Israeli public and for me personally," he told reporters.

According to the indictment, Netanyahu accepted hundreds of thousands of dollars of champagne and cigars from billionaire friends, offered to trade favours with a newspaper publisher and used his influence to help a wealthy telecom magnate in exchange for favourable coverage on a popular news site.

The indictment does not require Netanyahu to resign, but it significantly weakens him at a time when Israel's political system appears to be limping toward a third election in under a year.

The political party of Netanyahu's chief rival, former military commander Benny Gantz, said the prime minister has "no public or moral mandate to make fateful decisions for the state of Israel."

Netanyahu has called the allegations part of a witch hunt, lashing out against the media, police, prosecutors and the justice system. He planned a statement later Thursday.

Mandelblit criticized the often-heated pressure campaigns by Netanyahu's supporters and foes to sway his decision, which came after months of deliberations. Both sides had staged demonstrations outside or near his home.

The most serious charges were connected to so-called "Case 4000," in which Netanyahu is accused of passing regulations that gave his friend, telecom magnate Shaul Elovitch, benefits worth over $250 million to his company Bezeq. In return, Bezeq's news site, Walla, published favourable articles about Netanyahu and his family.

The relationship, it said, was "based on a mutual understanding that each of them had significant interests that the other side had the ability to advance." It also accused Netanyahu of concealing the relationship by providing "partial and misleading information" about his connections with Elovitch.

Two close aides to Netanyahu turned state's witness and testified against him in the case.

The indictment also said that Netanyahu's gifts of champagne from billionaires Arnon Milchan and James Packer "turned into a sort of supply line." It estimated the value of the gifts at nearly $200,000.

The indictment said Netanyahu assisted the Israeli Milchan, a Hollywood mogul, in extending his U.S. visa. It was not immediately clear what, if anything, Packer, who is Australian, received in return.

The decision comes at a tumultuous time for the country. After an inconclusive election in September, both Netanyahu and Gantz, leader of the Blue and White party, have failed to form a majority coalition in parliament. It is the first time in the nation's history that that has happened.

The country now enters an unprecedented 21-day period in which any member of parliament can try to rally a 61-member majority to become prime minister. If that fails, new elections would be triggered.

Netanyahu is desperate to remain in office to fight the charges. Under Israeli law, public officials are required to resign if charged with a crime. But that law does not apply to the prime minister, who can use his office as a bully pulpit against prosecutors and push parliament to grant him immunity from prosecution.

In the first sign of rebellion, Netanyahu's top Likud rival on Thursday called for a leadership primary should the country, as expected, go to new elections.

The only plausible way out of a third election -- and the prolonged political paralysis that has gripped Israel for the past year -- would be a unity government.

In September's election, Blue and White edged Likud by one seat in the previous election. Together, the two parties could control a parliamentary majority and avoid elections.

Both Netanyahu and Gantz expressed an openness to a unity government. But during weeks of talks, they could not agree on the terms of a power-sharing agreement, including who would serve first as prime minister.

If elections are held, opinion polls are already predicting a very similar deadlock, signalling additional months of horse-trading and uncertainty.

That could now change. A poll carried out last month by the Israel Democracy Institute, a nonpartisan think-tank , found that 65% of Israelis thought Netanyahu should resign as head of the Likud party if indicted, with 24% opposed. The poll had a margin of error of 4 percentage points.

Opposition politicians immediately called on Netanyahu to step down. "If he has but a drop of honour left, he would resign tonight," said Stav Shaffir, a lawmaker with the liberal Democratic Union.

Netanyahu has refused to drop his alliance with smaller nationalist and ultra-Orthodox Jewish parties, which was a non-starter for kingmaker politician Avigdor Lieberman.

But the main sticking point has revolved around Netanyahu himself. Blue and White has said ti will not sit with Netanyahu while he faces such serious legal problems, though it is open to a partnership with Likud if he is removed from the equation.

The emergence of Saar as an heir could reshuffle the deck, but challenging Netanyahu in Likud is a risky manoeuvr in a party that fiercely values loyalty and has had only four leaders in its 70-plus-year history.

A former lawyer and journalist, Saar was first brought into politics 20 years ago by Netanyahu, who made him his Cabinet secretary in his first term in office. Saar then established himself as a staunch nationalist who opposed Israel's 2005 withdrawal from the Gaza Strip and resisted the prospect of a Palestinian state. He quickly rose in the Likud ranks, twice finishing first in internal elections for its parliamentary list and enjoying successful stints as education minister and interior minister after Netanyahu returned to power in 2009.

But as with others in Likud who saw their popularity rise, he too began to be perceived by Netanyahu as a threat. He quit politics in 2014 to spend more time with his family before making his comeback this year.

Despite his hard-line positions, Saar is liked and respected across the political spectrum and could prove a far more comfortable partner for unity with Gantz if elected head of Likud.