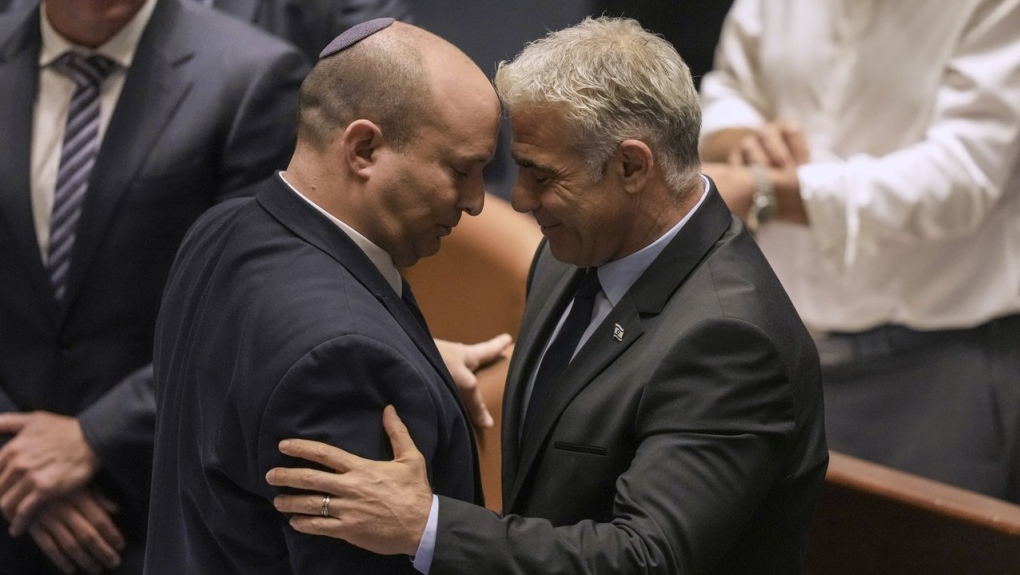 Israel's parliament voted Thursday to dissolve itself, triggering the country's fifth election in just over three years and thrusting veteran politician Yair Lapid into the role of interim prime minister as he tries to persuade a deeply polarized nation to embrace his centrist vision.

Polls indicate it will be a difficult road for Lapid to defeat his main rival, former Prime Minister Benjamin Netanyahu, a divisive figure who is at the heart of Israel's protracted political crisis. The election is set for Nov. 1.

Lapid, a former author, newspaper columnist and TV host, was the architect of the outgoing coalition government -- an alliance of eight diverse parties spanning the Israeli political spectrum that was bonded largely by their shared antipathy toward Netanyahu. The coalition ended the 12-year reign of Netanyahu, who was Israel's longest-serving prime minister.

As with the previous four elections, the upcoming vote promises to be another referendum on Netanyahu, who is adored with cult-like reverence by his admirers and reviled with equal strength by his opponents. The elections focused on his fitness to lead at a time when he is facing criminal charges of accepting bribes, fraud and breach of trust. He has denied any wrongdoing.

The current government collapsed just over a year after it was formed due to infighting and a string of defections. As part of their power-sharing deal, the current prime minister, Naftali Bennett, will step aside for Lapid, who officially takes office Friday. Bennett will not run in November.

In Israeli politics, no party has ever singlehandedly captured the 61-seat parliamentary majority in parliament required to form a government. Instead, the leader of the party who can cobble together a majority coalition with other parties becomes prime minister.

That sets up a de facto battle between Netanyahu, whose Likud party is projected to be the largest party, and Lapid, whose party is expected to be the second-largest but may be better positioned to form a coalition.

Both men are charismatic and gifted orators with a rare talent for connecting with both large audiences as well as smaller groups. Yet they offer vastly different world views.

Lapid, a secular and cosmopolitan resident of an upscale Tel Aviv neighborhood, burst onto the political scene in 2012 by forming his "Yesh Atid," or "There is a Future," party catering to the country's moderate and struggling middle class. Since those early days as an upstart, he has transformed himself into a feisty opposition leader and finally a savvy operator who ousted Netanyahu.

He has criticized the outsized influence of ultra-Orthodox parties and plans on courting Arab voters, if not for Yesh Atid then at least for partners that might join a future coalition.

In fact, the outgoing coalition he helped build made history by being the first to include an Arab party.

Lapid also will be the first Israeli prime minister since 2009 to support a two-state solution with the Palestinians, though he will not be able to launch any major initiatives during his caretaker term.

On the campaign trail, he will market himself as a unifier, while portraying Netanyahu as a divider. Netanyahu will likely paint his rival as inexperienced and dangerous.

Lapid did not speak publicly following Thursday's vote, instead huddling for meetings and paying a visit to Yad Vashem, Israel's national Holocaust memorial. Lapid's late father, the former journalist and Cabinet minister Joseph Lapid, was a Holocaust survivor and a major influence on his son.

"Immediately after the vote, I went to Yad Vashem to promise my father that I will always keep Israel strong, able to defend itself and ensure peace for its children," he said.

Netanyahu, meanwhile, is a fervent nationalist who has aligned himself with religious and ultranationalist parties that oppose Palestinian statehood and support the West Bank settler movement, which is widely seen internationally as illegal and an obstruction to peace.

He thrives on dividing and conquering his opponents, and frequently uses incendiary language against Israel's Arab minority.

"They promised change, they spoke about healing, they tried an experiment, and the experiment failed," Netanyahu said in an address to parliament ahead of Thursday's vote as he railed against the outgoing government. "We are the only alternative: a strong, stable, responsible nationalist government."

He kicked off his campaign immediately after the vote with a stop at a Jerusalem mall, where he promised cheering supporters that he would tackle rising prices.

Facing a country that has known little else but Netanyahu for well over a decade, Lapid's task in the coming months will be to convince the public that he is prime minister material.

He has used the last year as Israel's foreign minister to build up a roster of international contacts, deepening ties with new Arab allies and lobbying on the sidelines of negotiations over Iran's nuclear program.

And his new office, even in the role of caretaker, will give him a powerful platform to further that goal. In two weeks, he will host U.S. President Joe Biden, providing important facetime as well as repeated photo opportunities. Lapid will hold news conferences and lead Cabinet meetings and security briefings discussing the country's most important issues, and should get an opportunity to address the UN General Assembly in the fall.

Those moments could help him solidify the statesmanlike image he has sought to build. This week in the Knesset, the parliament, he appeared calm, collected and pensive. In private, he strikes a warmer note, and is known to break the ice with self-deprecating humor.

Yohanan Plesner, president of the Israel Democracy Institute, an Israeli think tank, said that Lapid's gambit could pay off.

Despite the deep divisions between Israel's religious and secular Jews, its dovish left wing and nationalist right wing and its Jewish and Arab communities, Plesner said there is a broad swath of the population that holds centrist views on issues like seeking an accommodation with the Palestinians. A swing of just a handful of parliamentary seats could determine the outcome of the vote.

"The center exists, and Lapid no doubt is the leader of this constituency," he said.

Polls by Israeli media show Netanyahu and his allies are projected to gain seats, although it is unclear whether they would have enough to form a majority outright.

If neither he nor anyone else succeeds in doing so, Israel could go to elections yet again, a scenario that could leave Lapid in charge for months to come.