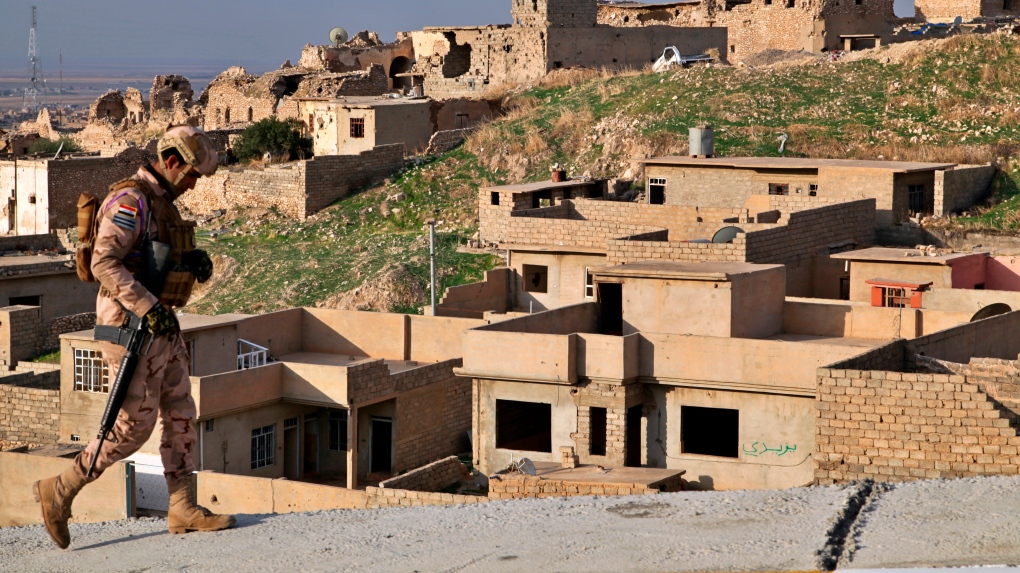 The Islamic State group unleashed its biggest attack in Syria since the fall of its "caliphate" three years ago. More than 100 militants assaulted the main prison holding suspected extremists, sparking a battle with U.S.-backed Kurdish fighters that continued 24 hours later and left dozens dead on Friday.

Across the border in Iraq, gunmen stormed an army barracks north of Baghdad before dawn Friday while soldiers inside slept, killing 11 before escaping -- the deadliest attack in months on Iraq's military.

The bold assaults suggest militants have been revitalized after maintaining a low- level insurgency in Iraq and Syria over the past few years. The group's territorial control in Iraq and Syria was crushed by a years-long U.S.-backed campaign, but its fighters continued with sleeper cells that have increasingly killed scores of Iraqis and Syrians in past months.

The attack in Syria targeted Gweiran Prison in the northeastern city of Hassakeh, the largest of around a dozen facilities run by U.S.-backed Syrian Kurdish forces holding suspected IS fighters. Gweiran holds some 5,000, including ISIS commanders and figures considered among the most dangerous, according to Farhad Shami, a spokesman for the Kurdish-led Syrian Democratic Forces, or SDF.

The forces' commander, Mazloum Abadi, said ISIS mobilized "most of its sleeper cells" to organize the jailbreak.

The fighting started with a large explosion around 7 p.m., followed by two more blasts later, said one resident whose home overlooks the area. The assault was complex. Prisoners inside the facility rioted and tried to break out simultaneously as a car bomb went off outside and gunmen clashed with security forces, Shami said. A car bomb hit a nearby petroleum depot, sparking a fire that still burned Friday.

On Friday, Kurdish forces were trying to retake the northern part of the prison, where inmates remained in control and attempted a second escape.

The SDF was also attacking in the nearby Zuhour neighborhood, where ISIS fighters were holed up. Fighting there was intense and movement slow because the militants have boobytrapped houses with explosives and were using civilians as human shields, Shami said. Coalition helicopters and other aircraft carried out strikes during the battle, including in Zuhour and on the prison, he said.

"Since yesterday, helicopters are always in the sky," said the resident, who spoke on condition of anonymity out of fear for his safety. Civilians were fleeing Zuhour, and shops were closed across Hassakeh as security forces fanned out, he said.

"We have provided some airstrikes to support them as they deal with this particular prison break," Kirby said, adding that the U.S. recognizes that the ISIS threat is not gone, and "we remain focused on that."

Shami said that the SDF had cordoned off the area and so far recaptured 104 militants who escaped from the prison. But he said the total number who had broken out was not determined.

He said seven Kurdish fighters and at least 28 IS attackers were killed in the battle.

Shami said the attack was ISIS's biggest since it lost its last shred of territory in Syria in 2019. The fighters were led by foreign militants, not Syrians, many of whom spoke in Iraqi dialect. "This is not a local operation," he said.

On Friday evening, Abadi, the SDF commander, said his forces managed to repel the attack, with the help from the U.S-led coalition. He tweeted that all fugitives were arrested. Shami, the spokesman, said a standoff was still underway in Zuhour.

The Islamic State group claimed responsibility for the attack on its Aamaq news service Friday, saying it aimed to free prisoners and describing it as ongoing. Attempted prison breaks have been a main tactic of the group. During their 2014 surge in which they overwhelmed territory in Iraq and Syria, they carried out multiple prison breaks.

Friday's attack in Iraq was a brazen strike on a barracks in the mountainous al-Azim district outside the town of Baqouba.

Two security officials told The Associated Press that IS militants broke into the barracks at 3 a.m. after killing a guard, shot dead the soldiers and successfully fled. The officials spoke on condition of anonymity as they weren't authorized to issue official statements.

The Iraqi military said in a statement that a lieutenant and 10 soldiers were killed. The officials said reinforcements and security forces deployed in the area.

Iraqi Prime Minister Mustafa al-Kadhimi vowed the attack on the barracks "will not go without decisive punishment," saying the Iraqi military had to duty "to prevent the repeat of these violations and to hunt down the terrorists."

ISIS was largely defeated in Iraq in 2017, but its militants have continued to wage attacks, frequently hitting security forces and military with roadside bombs and firing on military convoys or checkpoints.

They have at times also attacked civilians. In October, ISIS militants armed with machine guns raided a predominantly Shiite village in Iraq's Diyala province, killing 11 civilians and wounding several others. Officials at the time said the attack occurred after the militants had kidnapped villagers and their demands for ransom were not met.

The Islamic State group's self-styled caliphate at its height covered a third of both of Iraq and Syria. The ensuing war against them lasted several years, killed thousands, and left large parts of the two neighboring countries in ruins. It also left U.S.-allied Kurdish authorities in control of eastern and northeastern Syria, with a small presence of several hundred American forces still deployed there.