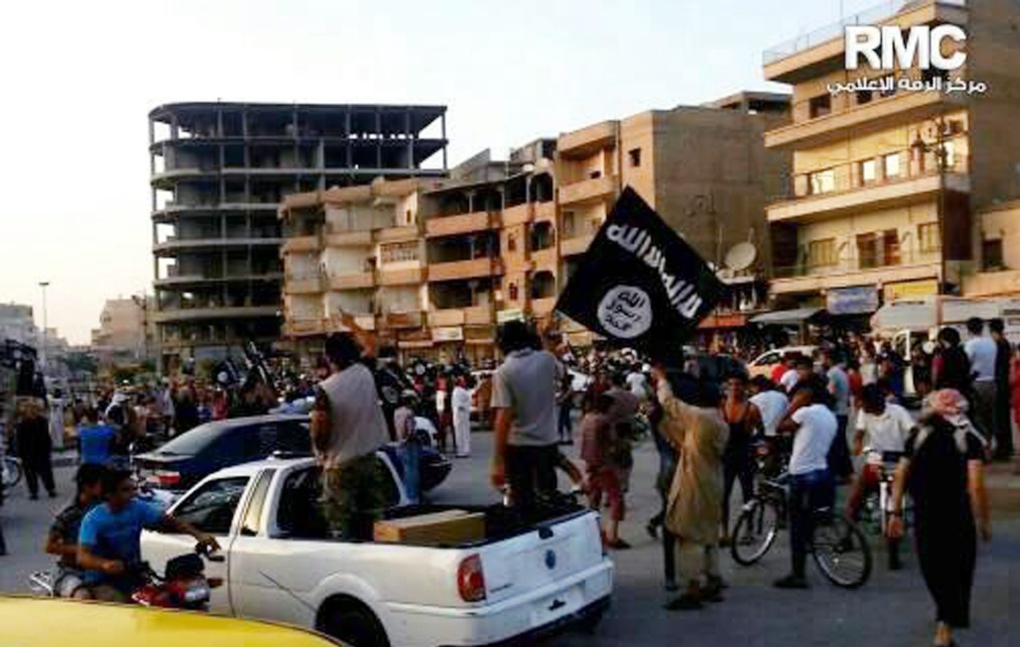 An undated file photo posted by the Raqqa Media Center, a Syrian opposition group, on Monday, June 30, 2014, which has been verified and is consistent with other AP reporting, shows fighters from extremist Islamic State group during a parade in Raqqa, Syria.

BEIRUT -- Syria's Western-backed opposition called on Saturday for U.S. airstrikes against the Islamic State extremist group as the jihadists captured three northern villages, putting them within striking distance of a mainstream rebel stronghold.

Islamic State fighters have overrun nearly a dozen towns and villages in Aleppo province this week, crushing what little resistance they have encountered. Those gains threaten rival factions' supply lines to neighbouring Turkey and squeeze the mainstream armed opposition's position in the country's largest city, Aleppo, which is also under assault by President Bashar Assad's forces.

With the mainstream rebels' foothold in Aleppo becoming increasingly precarious, the Syrian National Coalition urged the international community to "quickly support the Free Syrian Army with weapons and ammunition" so it could "defend its people."

"We call on the international community to use the American air force, or those of any other country to support the Free Syrian Army," the Coalition said in a statement on Saturday, referring to the group's military wing.

The Coalition has long appealed for more robust military support from the West to help in its fight to oust Assad, and more recently to counter the rise of Islamic extremists.

But the group's appeal Saturday appeared aimed at capitalizing on the recent U.S. aerial intervention in neighbouring Iraq, where American military aircraft have targeted the Islamic State group as the militants advanced on the largely autonomous Kurdish region and threatened Christians and other religious minorities.

But President Barack Obama has long refused demands for similar action in Syria, fearing it could draw the U.S. into an increasingly complex and bloody civil war.

The Islamic State group, which moved aggressively into Syria in early 2013, has carved out a self-styled caliphate in the territory it has seized in northeastern Syria as well as northern and western Iraq.

The group has added to the territory under its control, taking over the village of Maled near the town of Marea in Aleppo province late Friday, the Britain-based Syrian Observatory for Human Rights said.

An activist in the area who goes by the name of Fayez Abu Quteibah said the group also captured two other villages near Marea -- Hamidiyeh and Sonbol.

Those gains come days after the extremists overran several other villages and two towns in Aleppo province. The extremist group's ultimate goal appears to be Marea itself, a stronghold of the once-powerful Islamic Front rebel group, which has been fighting the jihadists since January.

"If Marea falls, this will open the road for them (Islamic State group) to march toward all parts of northern Aleppo," Abu Quteibah said via Skype.

The Syrian government, meanwhile, carried out airstrikes on two of the localities the extremists overran this week, hitting Akhtarin and Dabiq, the Observatory said. There was no immediate word on casualties or what was targeted.

On Friday, the U.N. Security Council imposed sanctions on six men for recruiting or financing foreign fighters in Iraq and Syria, and threatened additional sanctions against anyone supporting terrorist groups.

The Security Council also demanded in a unanimously adopted resolution that the Islamic State group and al-Qaida-linked groups disarm and disband immediately.