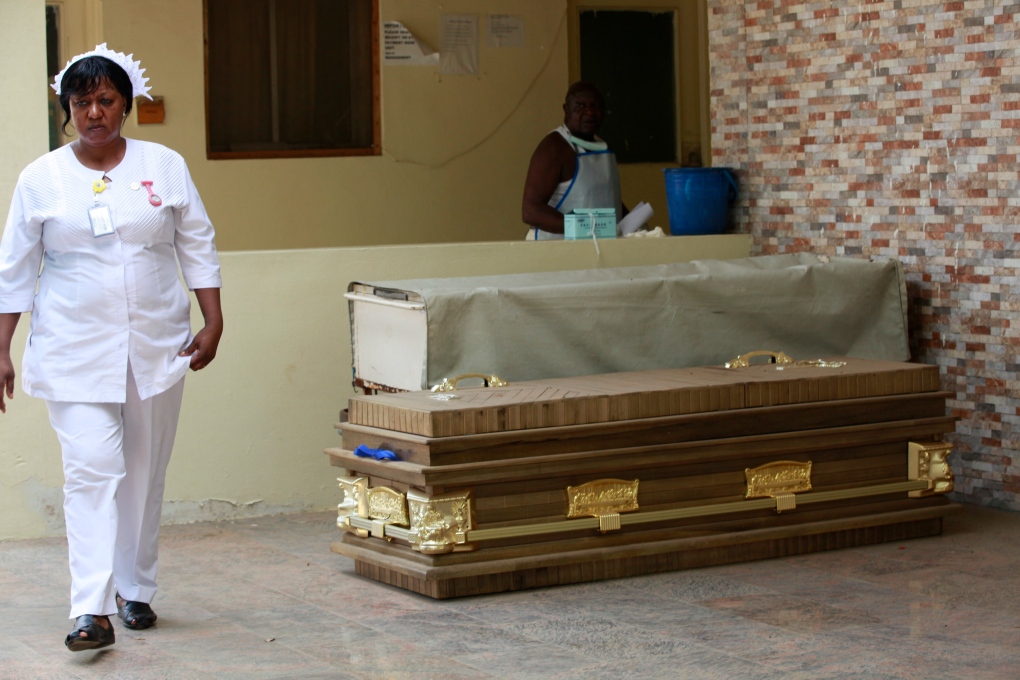 A nurse walks past coffins outside a morgue at Asokoro hospital in Abuja, Nigeria, Tuesday, April. 15, 2014, following a blast on Monday that destroyed more than 30 vehicles and caused secondary explosions as their fuel tanks exploded and burned. (AP / Sunday Alamba)

LAGOS, Nigeria -- Suspected Muslim extremists kidnapped about 100 girls Tuesday from a school in northeastern Nigeria, less than a day after militants bombed a bus station and killed 75 people in the capital -- a surge of violence that raised new doubts about the military's ability to contain an Islamic uprising.

With an 11-month-old state of emergency in three northeastern states failing to bring relief, the attacks are increasing calls for President Goodluck Jonathan to rethink his strategy in confronting the biggest threat to the security of Africa's most populous nation.

The attacks by the Boko Haram terrorist network have killed more than 1,500 people in this year alone, compared with an estimated 3,600 dead between 2010 and 2014.

In the latest attack, gunmen killed a soldier and a police officer guarding a school in Chibok on the edge of the Sambisa Forest and abducted the teenage girls after midnight, according to authorities.

Some of the girls escaped by jumping off the open truck as it was moving slowly along a road, according to an official who spoke on condition of anonymity because he was not authorized to talk to reporters.

Islamic extremists have been abducting girls to use as cooks and sex slaves.

All schools in Borno state were closed three weeks ago because of stepped-up attacks that have killed hundreds of students in the past year. But the young women -- aged between 16 and 18 -- were recalled to take their final exams, a local government official said.

Boko Haram, whose name means "Western education is forbidden," has targeted schools, mosques, churches, villages and agricultural centres in assaults that are increasingly indiscriminate. The insurgents have also made daring raids on military barracks and bases.

The report of the abductions came as officials were still dealing with the aftermath of Monday's bombing at the Abuja bus station that killed 75 and wounded 141, just miles from Nigeria's seat of government. The attack also was blamed on Boko Haram.

Last week, extremists staged their first reported attack in Jigawa state, to the west of the northeastern states where Boko Haram holds influence. They hit a police station, a Shariah Islamic court and a bank, and killed seven police officers.

Farther south, Gov. Gabriel Suswam of Benue state said traditional rivalries over land and water resources between mainly Christian farmers and predominantly Muslim herders are being exploited by militants. More than 200 people have been killed there in recent weeks.

"The belief I have, and which is shared by a lot of people, is that it is the same insurgents that are operating in other parts of the country that have found themselves in Benue, using the Fulani as a facade to unleash mayhem," Suswam told the Daily Trust newspaper.

Former Vice-President Atiku Abubakar suggested it was time for the Nigerian government "to accept foreign assistance with fighting terrorism."

"The bombings ... automatically cast doubts on the (government) claims of containing the crisis to the fringes of the country," he said, urging stepped-up intelligence to pre-empt attacks.

Abubakar, who made his remarks in a statement responding to Monday's bombing, could not be reached to clarify his call. But it could be informed by a growing distrust of Nigeria's military by many northerners.

The country's two main political parties even have accused each other of supporting the Islamic insurgency for ulterior motives.

Jonathan said last year that he believes there are Boko Haram sympathizers and supporters even in his Cabinet and high ranks of the military. That was before he dismissed his entire military command in January, followed by the defence minister.

The New York-based World Policy Institute has identified northern politicians from both main parties who it says supported Boko Haram or were victims of extortion by the extremists.

Some politicians have accused members of the military of colluding with Boko Haram, feeding the network information and arms, so that they can continue to steal from war coffers.

And some northern politicians say that keeping the insurgency going is a way to weaken the north as Nigeria gears up for elections in February 2015 that are shaping up as the biggest challenge to confront the governing People's Democratic Power since it won power in 1999 to end decades of military dictatorship.

Jonathan, a Christian from a minority tribe in the south, is expected to contend despite opposition even from within his own party, breaking an unwritten rule to alternate the presidency between a Christian southerner and a Muslim northerner.

In a country where relations between Muslims and Christians can be fraught and sometimes escalate into bloodshed, the 5-year-old insurgency is encouraging extremists from both religions and widening the gulf as never before.

The spiritual leader of Nigeria's more than 85 million Muslims said Sunday that there is no plot to Islamize the country, where another 85 million are Christians.

"Nobody can Islamize Nigeria. If Allah wanted, he would have made everybody Muslims, so also with Christianity," said the sultan of Sokoto, Sa'ad Abubakar.

He said he hoped the government would take note of a stern statement last week from Jama'atu Nasril Islam, the country's biggest Muslim organization, which is headed by the sultan. It accused the military, which is notorious for human rights abuses, of killing Muslims "indiscriminately in the guise of fighting terrorism."

Jama'atu Nasril Islam alleged there is "a hidden grand agenda to destabilize Muslims in Nigeria."

For his part, Jonathan has said the Islamic uprising is a plot to destabilize his administration.

Transforming Nigeria into an Islamic state is Boko Haram's stated mission. It says that establishing Shariah law will halt the endemic corruption that keeps 70 per cent of Nigerians impoverished while an elite lives in obscene luxury off oil proceeds.