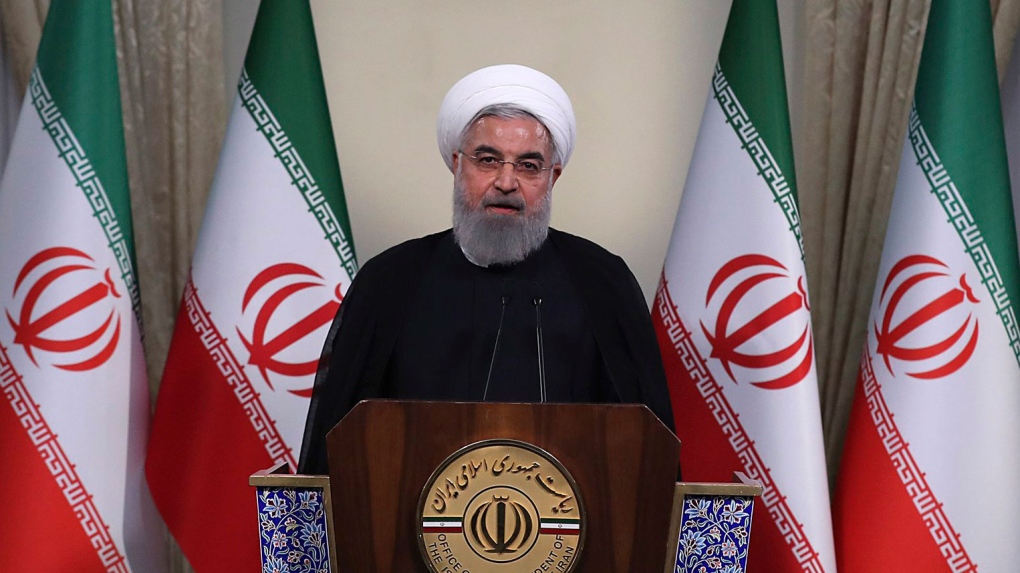 In this photo released by official website of the office of the Iranian Presidency, President Hassan Rouhani addresses the nation in a televised speech in Tehran, Iran, Tuesday, May 8, 2018. (Iranian Presidency Office via AP)

TEHRAN, Iran -- A U.S. Navy veteran detained in Iran in July is being held in connection to a "private complaint," the semi-official Mehr news agency reported Friday.

Michael White, 46, has been held since July, and is the first known American to have been detained in Iran since Donald Trump became president. His family says he travelled to Iran to visit his girlfriend, who he met online, and was arbitrarily detained.

The Friday report quoted prosecutor Gholamali Sadeghi as saying the case is still "under investigation," without elaborating. He did not confirm reports that the man faces security charges. Under Iranian law, a private complaint would refer to allegations made by a citizen, not the state.

Trump has pursued a maximalist campaign against Tehran that includes pulling out of its nuclear deal with world powers. Iran in the past has detained Westerners and dual nationals to use them as leverage in negotiations.

Joanne White, the detainee's mother, issued a statement earlier this month calling on the Trump administration to secure his release. She said he was undergoing cancer treatment and feared he would not survive prolonged detention.

Michael White worked as a cook for the Navy and left the service about a decade ago, according to a spokesman for the family, who insisted White was not a spy and had never been one. The spokesman, Jonathan Franks, said White had recently worked as a janitor.

There are at least four other known American citizens being held in Iran.

Iranian-American Robin Shahini was released on bail in 2017 after staging a hunger strike while serving an 18-year prison sentence for "collaboration with a hostile government." Shahini is believed to still be in Iran.

Also in an Iranian prison is Nizar Zakka, a U.S. permanent resident from Lebanon who advocated for internet freedom and has done work for the U.S. government. He was sentenced to 10 years on espionage-related charges.

Former FBI agent Robert Levinson, who vanished in Iran in 2007 while on an unauthorized CIA mission, remains missing as well. Iran says that Levinson is not in the country and that it has no further information about him, but his family holds Tehran responsible for his disappearance.