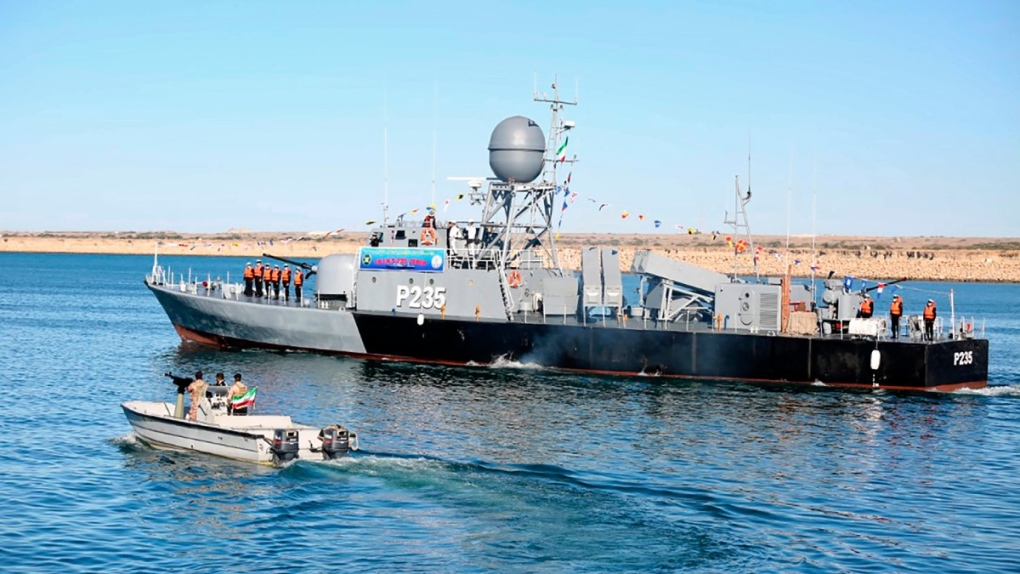 An Iranian Navy warship during a navy military drill in the Gulf of Oman in Iran, on Jan. 13, 2021. (Iranian Army via AP)

DUBAI, UNITED ARAB EMIRATES -- Iran fired cruise missiles Thursday as part of a naval drill in the Gulf of Oman, state media reported, under surveillance of what appeared to be a U.S. nuclear submarine dispatched to the region amid heightened tensions between the countries.

Helicopter footage of the exercise released by Iran's navy showed what resembled an Ohio-class guided-missile submarine, the USS Georgia, which the U.S. Navy last month said had been sent to the Persian Gulf - a rare announcement aimed at underscoring American military might in the region.

Iran's navy did not identify the submarine, but warned the boat to steer clear of the area, where missiles were being launched from land units and ships in the gulf and the northern part of the Indian Ocean. When asked for comment on the reported submarine sighting, Cmdr. Rebecca Rebarich, a spokeswoman for the U.S. Navy's Bahrain-based 5th Fleet, responded: “We don't talk about submarine operations.”

The two-day drill began on Wednesday with the unveiling of the largest vessel in the Iranian Navy, the latest in a series of Iranian military exercises during the waning days of the administration of U.S. President Donald Trump. Over the weekend, the paramilitary Revolutionary Guard held a naval parade in the Persian Gulf shortly after seizing a South Korean tanker in the crucial Strait of Hormuz. Last week, Iran deployed unmanned aircraft to stage a large-scale drone manoeuvre across half the country.

Iran's state TV broadcast footage of the missile launches on Thursday but didn't provide their range or other details. In July, Iran said it test-fired cruise missiles with a range of some 280 kilometres (some 175 miles).

“Enemies should know that any violation and invasion of Iranian marine borders will be targeted by the cruise missiles from both coast and sea,” said Adm. Hamzeh Ali Kaviani, the spokesman for Thursdays' exercise.

Tensions are rising as Iran ramps up pressure on the West over the tattered atomic deal and the Trump administration's “maximum pressure” campaign against the Islamic Republic.

President Donald Trump in 2018 unilaterally withdrew the U.S. from Iran's nuclear deal, in which Tehran had agreed to limit its uranium enrichment in exchange for the lifting of economic sanctions. Trump cited Iran's ballistic missile program among other issues in withdrawing.

Following the U.S.'s re-imposition of unprecedented sanctions on Iran, Tehran gradually and publicly abandoned the deal's limits on its nuclear development as a series of escalating incidents pushed the two countries to the brink of war at the beginning of last year.