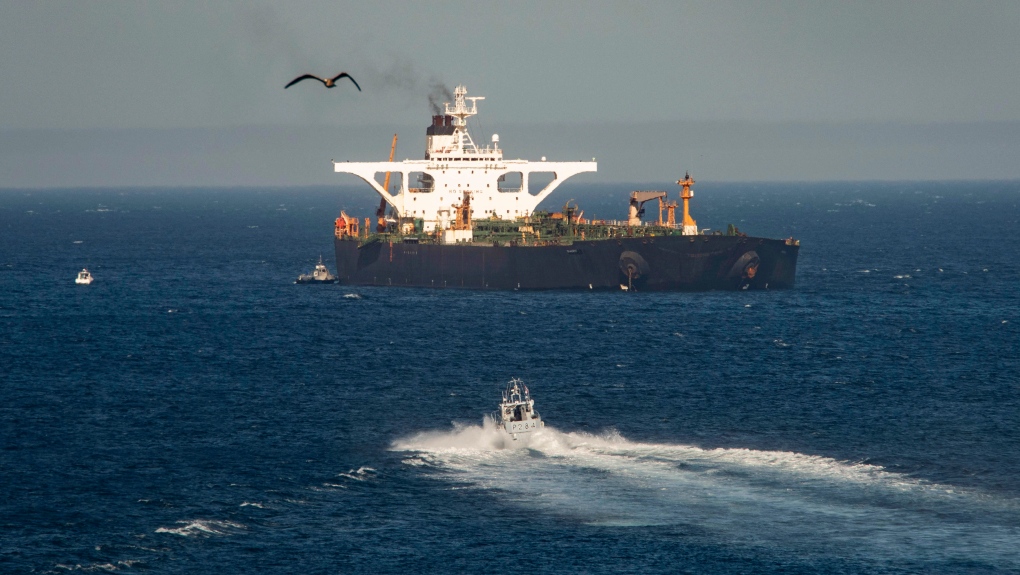 DUBAI, United Arab Emirates -- An Iranian oil tanker pursued by the U.S. turned off its tracking beacon, leading to renewed speculation on Tuesday that it will head to Syria.

The disappearance of the Adrian Darya 1, formerly known as the Grace 1, follows a pattern of Iranian oil tankers turning off their Automatic Identification System to try and mask where they deliver their cargo amid U.S. sanctions targeting Iran's energy industry.

Meanwhile, Iranian President Hassan Rouhani reiterated on Tuesday that Tehran will not enter into direct talks with the U.S. unless Washington rejoins the 2015 nuclear deal that President Donald Trump withdrew America from over a year ago.

Trump's withdrawal and the imposition of heavy economic sanctions on Iran have blocked it from selling its crude oil abroad, a crucial source of government funding for the Islamic Republic. Meanwhile, tensions have spiked across the Persian Gulf over mysterious tanker explosions, the shooting down of a U.S. military surveillance drone by Iran and America deploying more troops and warplanes to the region.

The Adrian Darya, which carries 2.1 million barrels of Iranian crude worth some $130 million, switched off its AIS beacon just before 1600 GMT Monday, according to the ship-tracking website MarineTraffic.com. The ship was some 45 nautical miles (83 kilometres) off the coast of Lebanon and Syria, heading north at its last report.

Earlier, Secretary of State Mike Pompeo had alleged the U.S. had intelligence that the Adrian Darya would head to the Syrian port of Tartus, just a short distance from its last reported position.

The actions of the Adrian Darya follow a pattern of other Iranian ships turning off their trackers once they reach near Cyprus in the Mediterranean Sea, said Ranjith Raja, a lead analyst at the data firm Refinitiv.

Based on the fact Turkey has stopped taking Iranian crude oil and Syria historically has taken around 1 million barrels of crude oil a month from Iran, Raja said it was likely the ship would be offloading its cargo in Syria. That could see it transfer crude oil on smaller vessels, allowing it to be taken to port, he said.

"The Iranian oil going to Syria is not something new," Raja said. "This is a known fact."

The oil shipment website Tanker Trackers similarly believes the Adrian Darya to be off Syria.

"It is now safe to assume she is in Syria's territorial waters," Tanker Trackers wrote on Twitter on Tuesday.

Iranian officials haven't identified who bought the Adrian Darya's cargo, only that it has been sold.

The U.S., which has sought to seize the tanker, alleged in federal court that the ship is owned by Iran's Revolutionary Guard, a paramilitary organization answerable only to Supreme Leader Ayatollah Ali Khamenei. The U.S. recently declared the Guard a terrorist organization, giving it greater power to pursue seizing its assets.

U.S. officials since have warned countries not to aid the Adrian Darya, which previously said it would be heading to Greece and Turkey before turning off its tracker Monday. Authorities in Gibraltar alleged the ship was bound for a refinery in Baniyas, Syria, when they seized it in early July. They ultimately let it go after holding it for weeks.

Meanwhile, Rouhani addressed Iran's parliament on Tuesday and touched on ongoing negotiations aimed at saving the country's unraveling nuclear deal. Under the landmark 2015 agreement, Iran agreed to limit its enrichment of uranium in exchange for the lifting of economic sanctions.

The International Atomic Energy Agency confirmed last week that Iran's stockpile of low-enriched uranium still exceeds the amount allowed by the deal. The U.N. agency also said Iran continues to enrich uranium up to 4.5%, above the 3.67% allowed under the deal but still far below weapons-grade levels of 90%.

Iran has warned it will take additional steps away from the accord on Friday if it doesn't get help from Europe to sell its oil abroad, calling it their "third step" away from the deal. An Iranian lawmaker has suggested France is proposing a $15 billion credit line for Tehran if it returns to the deal.

Rouhani told lawmakers that Iran wouldn't negotiate directly with the U.S. unless it returned to the deal. That's after speculation grew of a possible meeting between Trump and Iranian officials following an appearance by Iranian Foreign Minister Mohammad Javad Zarif at the Group of Seven meeting in August.

"Unfortunately after America's violation (of the deal) and treachery and its getting out of its commitments, the Europeans too either failed to carry out their duties, or couldn't do so, or both," Rouhani told parliament.

Rouhani added: "If (the Europeans) don't do anything significant, we surely will take the third step in the coming days."

Iran's Deputy Foreign Minister Abbas Araghchi echoed that sentiment, lashing out at both Trump for pulling out of the nuclear deal and at Europeans for failing to implement a solution that would compensate for the U.S. withdrawal.

"They promised to find practical solutions in order to let Iran still benefit from the sanctions lifting to compensate the absence of the U.S.," Araghchi told a European economic gathering in Slovenia. "What happened? ... The Europeans are still not able to create a simple banking channel to let business between Iran and Europe, to let their own companies do business with Iran."