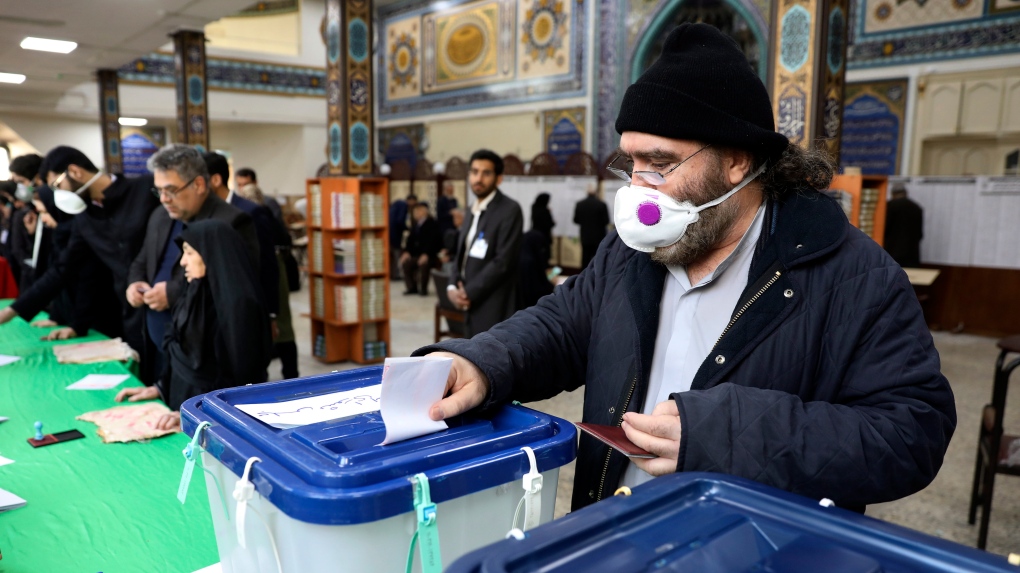 A voter casts his ballot in the parliamentary elections in a polling station in Tehran, Iran, Friday, Feb. 21, 2020. (AP Photo/Vahid Salemi)

The governor of Markazi province told the official IRNA news agency that tests of a patient who recently died in the central city of Arak were positive for the virus.

Ali Aghazadeh said the person was also suffering from a heart problem.

So far, 28 cases have been confirmed in Iran, including at least five of the six who died.

People are being treated for the virus in at least four different cities, including the capital, Tehran, where some pharmacies had already run out of masks and hand sanitizer. Other cities are Qom, Arak and Rasht

The virus loomed over a nationwide parliamentary election in Iran on Friday. Many voters went to the polls wearing face masks.

Minoo Mohraz, an Iranian health ministry official, had said Friday that the virus "possibly came from Chinese workers who work in Qom and travelled to China." She did not elaborate. A Chinese company has been building a solar power plant in Qom.

World Health Organization officials have said that China's crackdown on parts of the country bought time for the rest of the world to prepare for the new virus. But as hot spots emerge around the globe, including in South Korea and Iran, there has been trouble finding the first patient who sparked each new cluster.

Qom is a popular religious destination and a centre of learning and religious studies for Shiite Muslims from inside Iran, as well as Iraq, Pakistan and Afghanistan and Azerbaijan.

As a preventive measure, Iran has closed schools in Tehran, Qom, Arak and three other provinces. Also, the city of Tehran closed down all bistros and water fountains in the city's subway stations until further notice.

Elsewhere in the region, Saudi Arabia announced that citizens and residents of the kingdom are not permitted to travel to Iran following the spread of the virus there. Anyone previously in Iran will only be permitted entry to the country after the 14-day incubation period of the virus has passed.

The decision, while not specifically mentioning Iranian nationals, directly impacts thousands of Iranians who travel to Mecca and Medina for Islamic pilgrimages, effectively barring them from entry to Saudi Arabia.

The kingdom has already barred its citizens and residents from travel to China.