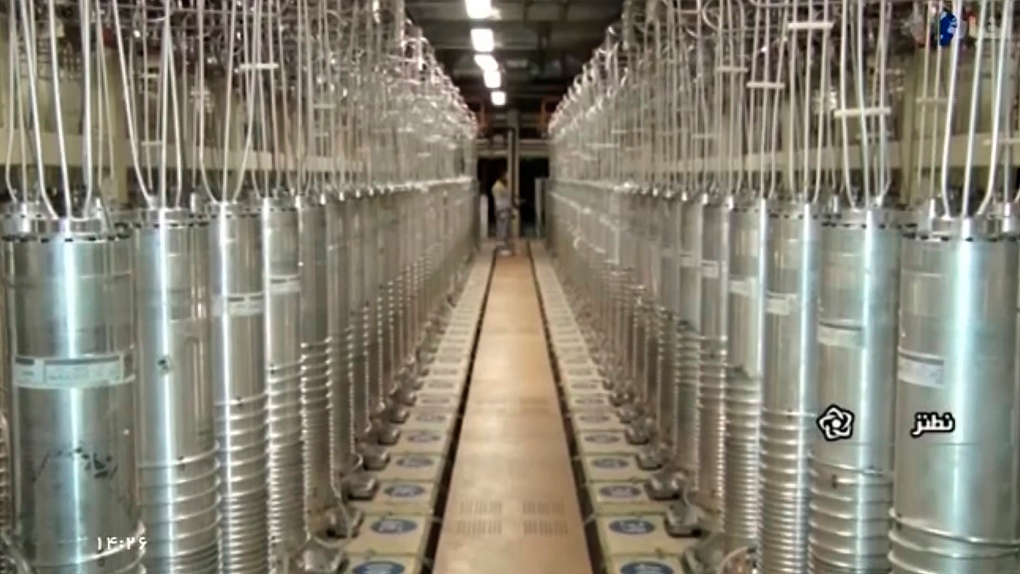 In this image made from April 17, 2021, video released by the Islamic Republic Iran Broadcasting, IRIB, state-run TV, various centrifuge machines line the hall damaged on Sunday, April 11, 2021, at the Natanz Uranium Enrichment Facility, some 200 miles (322 km) south of the capital Tehran, Iran. (IRIB via AP, File)

TEHRAN, IRAN -- Iran named a suspect Saturday in the attack on its Natanz nuclear facility that damaged centrifuges there, saying he had fled the country "hours before" the sabotage happened.

While the extent of the damage from the April 11 sabotage remains unclear, it comes as Iran tries to negotiate with world powers over allowing the U.S. to re-enter its tattered nuclear deal and lift the economic sanctions it faces.

Already, Iran has begun enriching uranium up to 60 per cent purity in response -- three times higher than ever before, though in small quantities. The sabotage and Iran's response to it also have further inflamed tensions across the Mideast, where a shadow war between Tehran and Israel, the prime suspect in the sabotage, still rages.

State television named the suspect as 43-year-old Reza Karimi. It showed a passport-style photograph of a man it identified as Karimi, saying he was born in the nearby city of Kashan, Iran.

The report also aired what appeared to be an Interpol "red notice" seeking his arrest. The arrest notice was not immediately accessible on Interpol's public-facing database. Interpol, based in Lyon, France, declined to comment.

The TV report said "necessary actions" are underway to bring Karimi back to Iran through legal channels, without elaborating. The supposed Interpol "red notice" listed his foreign travel history as including Ethiopia, Kenya, the Netherlands, Qatar, Romania, Turkey, Uganda and the United Arab Emirates.

The report did not elaborate how Karimi would have gotten access to one of the most secure facilities in the Islamic Republic. However, it did for the first time show authorities acknowledging an explosion struck the Natanz facility.

There was a "limited explosion of a small part of the electricity-feeding path to the centrifuges' hall," the TV report said. "The explosion happened because of the function of explosive materials and there was no cyberattack."

Initial reports in Israeli media, which maintain close relations to its military and intelligence services, blamed a cyberattack for the damage.

The Iranian state TV report also said there were images that corroborated the account of an explosion rather than cyberattack offered by security services, but it did not broadcast those pictures.

The report also showed centrifuges in a hall, as well as what appeared to be caution tape at the Natanz facility. In one shot, a TV reporter interviewed an unnamed technician, who was shown from behind -- likely a safety measure as Iranian nuclear scientists have been assassinated in suspected Israeli-orchestrated attacks in the past.

"The sound that you are hearing is the sound of operating machines that are fortunately undamaged," he said, the high-pitched whine of the centrifuges heard in the background. "Many of the centrifuge chains that faced defects are now under control. Part of the work that had been disrupted will be back on track with the round-the-clock efforts of my colleagues."

In Vienna, negotiations continued over the deal Saturday with another meeting of diplomats from Iran and the five powers that remain in the deal, with expert-level working groups on sanctions-lifting and nuclear issues set to continue activities through to next week.

Iran's negotiator told state TV that the talks had entered a new phase, adding that Iran had proposed draft agreements that could be a basis for negotiation.

"We think that the talks have reached a stage where parties are able to begin to work on a joint draft," Abbas Araghchi said. "It seems that a new understanding is taking shape, and now there is agreement over final goals."

Enrique Mora, the European Union official who chaired the talks, tweeted that "progress has been made in a far from easy task. We need now more detailed work."

The 2015 accord, which former President Donald Trump unilaterally withdrew the U.S. from in 2018, prevented Iran from stockpiling enough high-enriched uranium to be able to pursue a nuclear weapon if it chose in exchange for the lifting of economic sanctions.

Iran insists its nuclear program is peaceful, though the West and the IAEA say Tehran had an organized military nuclear program up until the end of 2003. An annual U.S. intelligence report released Tuesday maintained the longtime American assessment that Iran isn't currently trying to build a nuclear bomb.

Iran previously had said it could use uranium enriched up to 60 per cent for nuclear-powered ships. However, the Islamic Republic currently has no such ships in its navy.

The attack at Natanz was initially described only as a blackout in its electrical grid -- but later Iranian officials began calling it an attack.

One Iranian official referred to "several thousand centrifuges damaged and destroyed" in a state TV interview. However, no other official has offered that figure and no images of the aftermath have been released.