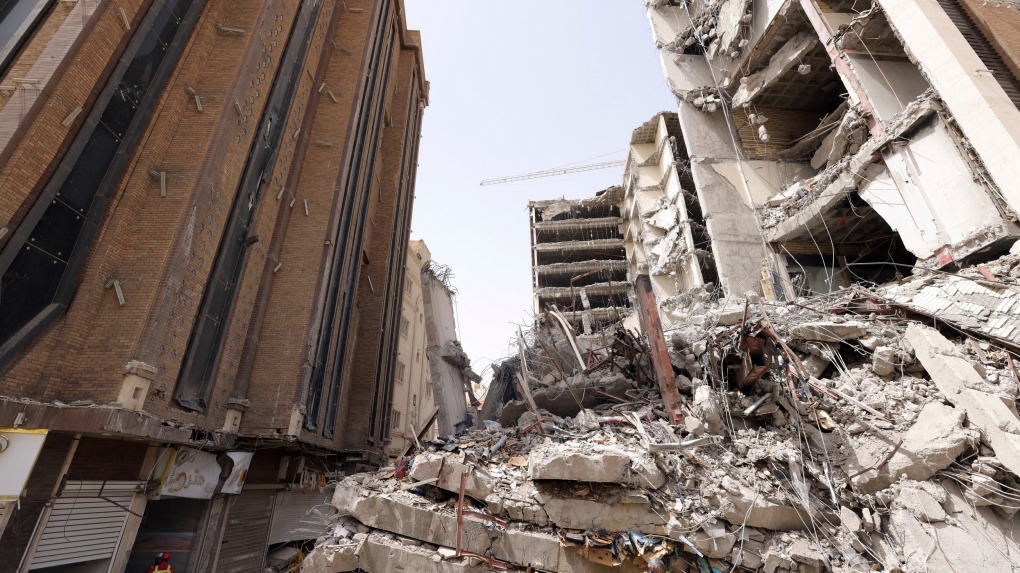 Iranian riot police fired tear gas and shot into the air to disperse an angry crowd of hundreds of people near the site of a building collapse in the southwestern city of Abadan, online video analyzed Saturday showed.

One report by Iran's semiofficial Fars news agency also acknowledged the unrest late Friday over the disaster this week that killed at least 29 people, with more feared still buried under the rubble of the 10-storey building. This comes as Iran suffers worsening economic conditions under crushing U.S. sanctions over its nuclear program, fueling concern in the Islamic Republic of renewed, widespread unrest.

Meanwhile, the country faced both targeted killings and other violence this week into Saturday, even as its paramilitary Revolutionary Guard seized two Greek oil tankers apparently over Athens allowing America to impound Iranian oil in the Mediterranean Sea.

Videos shared online showed a massive crowd of hundreds near the Metropol Building on Friday night, with lights shining on its facade. A second video showed demonstrators at street level chanting: "Our enemy is here; they lie that it is America!" A third showed an angry crowd with one shot heard. The person filming turned and ran, shouting: "Don't shoot! Don't shoot!"

The details in the videos corresponded with each other and to known features of Abadan, some 660 kilometres (410 miles) southwest of the capital, Tehran. Foreign-based Farsi-language television channels described tear gas and other shots being fired.

Fars described the situation as a riot that forced police to intervene. It wasn't immediately clear if anyone was injured or if police made any arrests.

In other cities people gathered peacefully to mourn, Fars and human rights activists reported. However, angry crowds have been gathering in Abadan since Iran on Thursday held a 100,000-person rally to mark the release of a new state-backed pop song called "Hello Commander."

On Friday, protesters in Abadan shouted: "In Tehran, there is wedding; Abadan is bleeding!"

Authorities acknowledge the building's owner and corrupt government officials allowed construction to continue at the Metropol Building despite concerns over its shoddy workmanship. The building collapsed on Monday. Authorities have arrested 13 people as part of a broad investigation into the disaster, including the city's mayor.

Rescue teams pulled three more bodies from the rubble on Saturday, bringing the death toll in the collapse to 29.

The deadly collapse has raised questions about the safety of similar buildings in the country and underscored an ongoing crisis in Iranian construction projects. The collapse reminded many of the 2017 fire and collapse of the iconic Plasco building in Tehran that killed 26 people.

Meanwhile, violence continued elsewhere in the country. Iran's state-run IRNA news agency said gunmen shot and wounded two police officers and a civilian Saturday in downtown Tehran. It said one officer was in critical condition. Authorities offered no cause.

Gun violence is rare in Iran, where tight controls govern who can own a firearm.

Earlier this month, a senior member of Iran's powerful Revolutionary Guard, Col. Hassan Sayyad Khodaei, was shot dead outside his home in Tehran by unidentified gunmen on a motorbike. Iran has blamed Israel for the shooting, which mirrored other attacks carried out by its intelligence service and allies.

Also on Saturday amid the regional tensions, Iranian state television aired footage of what it described as a "top secret" underground tunnel base for the country's army in the heart of the country's western Zagros Mountains. It said the tunnel was some 100 metres (330 feet) underground and was home to the Kaman-22 and Fotros drones, both capable of carrying cruise missiles.

Photos of the base later released by the army, however, contained a fire extinguisher with the word "Dalalu" written on it in Farsi -- possibly the secret base's location. Dalalu is a village in Iran's western Kermanshah province in the Zagros Mountains.