Invasions of indigenous land in Brazil rise under Bolsonaro 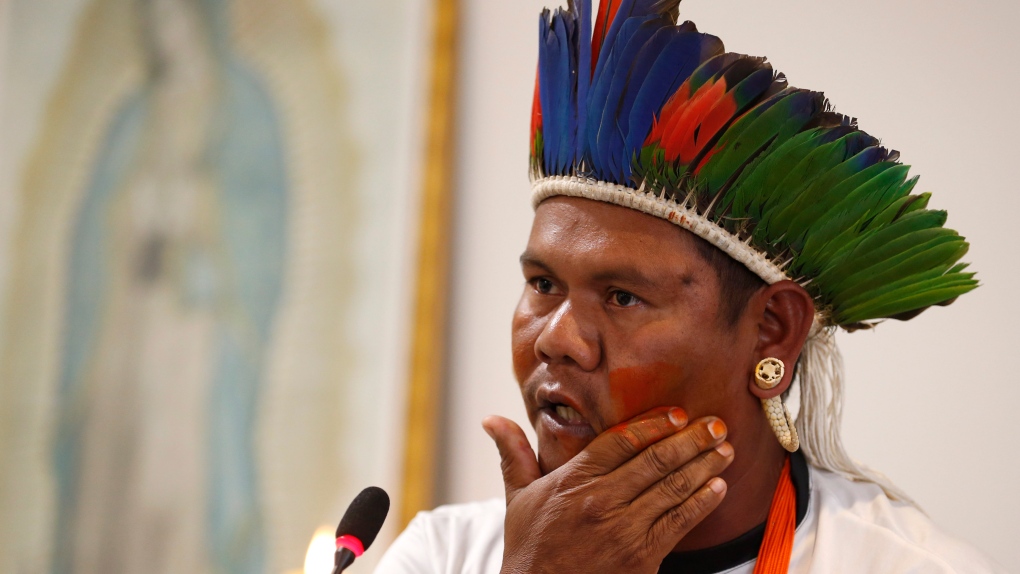 Surui, a Pataxo Indigenous chieftain, paints his face red to represent fellow indigenous people that have been killed, speaks at the launch of a report on violence against indigenous peoples in Brazil, at the headquarters of the National Conference of Bishops in Brasilia, Brazil, Tuesday, Sept. 24, 2019. A Brazilian Catholic Church agency says invasions of indigenous lands have jumped in the first nine months of President Jair Bolsonaro administration. The Missionary Indigenous Council said that illegal miners, loggers and tappers of natural resources are involved in most of the invasions. (AP Photo/Eraldo Peres)

SAO PAULO -- The number of invasions of indigenous lands in Brazil has jumped in the first nine months of President Jair Bolsonaro's administration, a Brazilian Catholic Church agency said Tuesday.

The Missionary Indigenous Council said illegal miners, loggers and tappers of natural resources are involved in most of the invasions.

The council reported at least 160 cases of "possessive invasions, illegal exploitation of natural resources of damage to heritage" on indigenous lands in the first nine months of 2019. There were 111 recorded cases for all of last year under conservative President Michel Temer.

The far-right Bolsonaro, who has the support of Brazil's powerful agro-business sector, has often complained that indigenous lands cover too much of Brazil and that development there should be easier. Critics say that encourages invaders seeking to exploit them.

The council's report said 13 of Brazil's 26 states reported indigenous lands invasions in 2018. This year that figure rose to 19 states.

Roberto Liebgott, a co-ordinator of the report, said the current situation is "more worrying for indigenous peoples than in any previous administration."

In his first speech at the United Nations' General Assembly, a pugnacious Bolsonaro denied his administration works against indigenous peoples, insisting they are being used as a tool by non-profit organizations and foreign powers to violate Brazil's sovereignty in the Amazon.

"Those who attack us are not worried about the indigenous peoples, but about the mineral richness" of the Amazon rainforest, Bolsonaro said at the U.N.

"We will continue calling on the authorities to fulfil their constitutional and international human rights law obligations to demarcate and protect indigenous lands," the human rights group said in a statement.