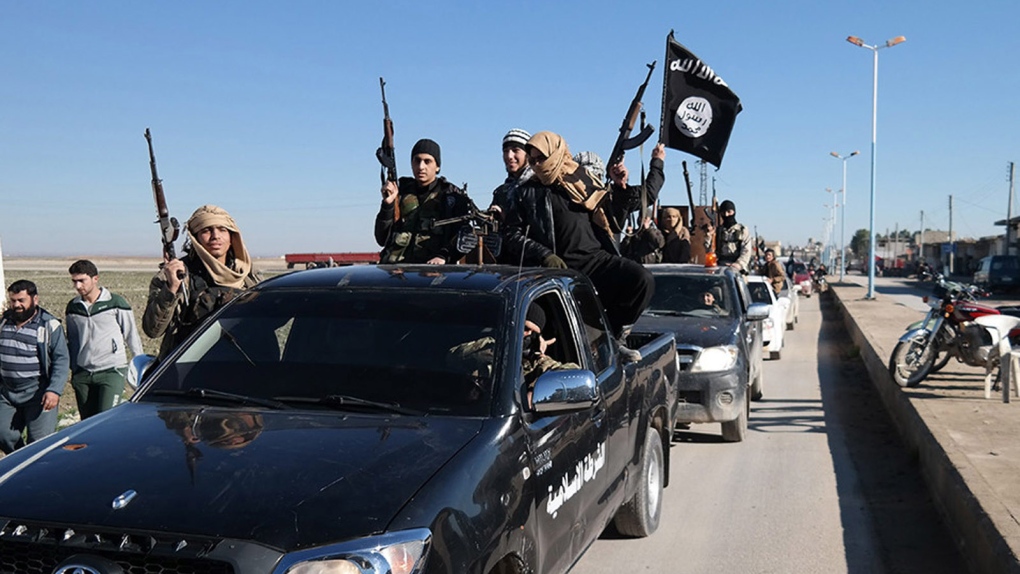 Islamic State militants pass by a convoy in Tel Abyad town, northeast Syria in this verified photo released on May 4, 2015. (Militant website via AP)

A growing number of extremist groups from Africa to southeast Asia are shifting their allegiance to the Islamic State group, leading to greater risks for "cross-pollination" among conflicts beyond Syria and Iraq, the head of Interpol said Friday.

Juergen Stock cited this shift as an emerging trend at a U.N. Security Council meeting along with changing travel methods being used by foreign fighters seeking to join groups like the Islamic State and al-Qaida.

Stock was a keynote speaker at a meeting attended by half a dozen ministers including U.S. Secretary of Homeland Security Jeh Johnson to assess progress in implementing a U.S.-sponsored resolution adopted last September requiring all countries to prevent the recruitment and transport of would-be foreign fighters preparing to join extremist groups.

On Friday, the Security Council adopted a presidential statement calling for a significant increase in border controls, improved co-operation at all levels "including preventing terrorists from exploiting technology, communications and resources."

Johnson said the United States will be developing a new passenger data-screening and analysis system within the next 12 months which will be made available to the international community at no cost for both commercial and government organizations to use.

In a report obtained by The Associated Press on April 1, the panel of experts monitoring U.N. sanctions against al-Qaida said the number of fighters leaving home to join al-Qaida and the Islamic State group in Iraq, Syria and other countries has spiked to more than 25,000 from over 100 nations. The panel said its analysis indicated the number of "foreign terrorist fighters" worldwide increased by 71 per cent between mid-2014 and March 2015.

Secretary-General Ban Ki-moon said most are young men motivated by extremist ideologies but he called for an examination of the reasons why more women and girls are joining the groups as well. He said he plans to present a plan of action to prevent violent extremism to the General Assembly later this year.

"No country can tackle this challenge alone," Ban said.

The Security Council Counterterrorism Committee said in a report Friday that it identified an initial 67 countries most affected by "foreign terrorist fighters," examined what 21 countries have done to address the threat and found that only five required advanced information on airplane passengers. It said most engage in international co-operation and nearly all have taken steps to prohibit incitement to terrorism under their criminal laws but only 13 countries had criminalized the financing of terrorism.

Interpol's Stock urged the 193 U.N. member states to share more information, "and share it even better," stressing that the international police organization database includes information from fewer than 100 countries and just over 4,000 names.

"Intelligence is crossing borders, but at a much slower pace than foreign terrorist fighters are," he said.