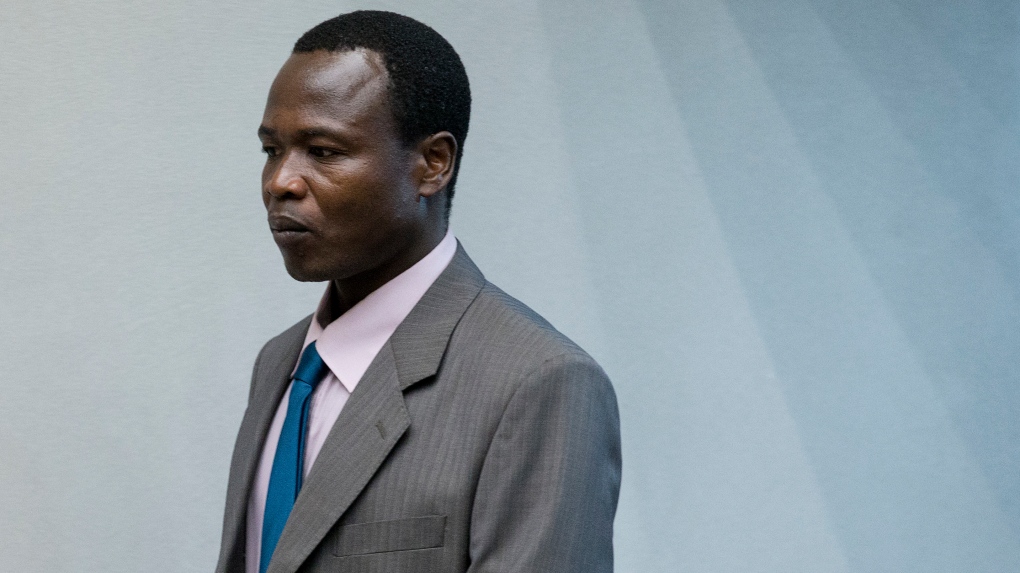 FILE- In this Tuesday, Dec. 6, 2016, file photo, Dominic Ongwen, a senior commander in the brutal Ugandan rebel group Lord's Resistance Army, whose fugitive leader Kony is one of the world's most-wanted war crimes suspects, enters the court room of the International Court in The Hague, Netherlands.(AP Photo/Peter Dejong, File)

THE HAGUE, NETHERLANDS -- The International Criminal Court sentenced a Ugandan former child soldier who turned into a brutal rebel commander to 25 years' imprisonment Thursday, with judges saying that his own abduction as a schoolboy and history as a child soldier prevented him being sentenced to life.

Dominic Ongwen was convicted in February of a total of 61 war crimes and crimes against humanity including murder, rape, forced marriage, forced pregnancy and using child soldiers as a commander in the shadowy Lord's Resistance Army. His lawyers have said they will appeal the conviction.

Presiding Judge Bertram Schmitt said that judges had to weigh Ongwen's brutality and victims' wishes for justice against his own tortured past when deciding on a sentence.

"The chamber is confronted in the present case with a unique situation. It is confronted with a perpetrator who wilfully brought tremendous suffering upon his victims," Schmitt said.

"However, it is also confronted with a perpetrator who himself had previously endured extreme suffering himself at the hands of the group of which he later became a prominent member and leader."

Ongwen, wearing a face mask and headphones, showed no emotion as he heard that the three-judge panel had given him a sentence five years longer than the 20 years prosecutors requested.

Ugandan authorities welcomed the sentence, in a case they had asked the court to investigate.

"As the government of Uganda, we are happy that the case we referred to the ICC had merit," said spokesman Ofwono Opondo. "We are satisfied, and we hope it will serve as a signal to others who think they can commit a crime and run away. The law will always catch up with you."

Ongwen's defence lawyers have always cast him as a victim of the LRA's brutality who was traumatized after being abducted as a 9-year-old and turned into a child soldier in the group's violent insurgency.

But judges in February ruled that he committed the crimes "as a fully responsible adult, as a commander of the LRA in his mid- to late 20s."

Schmitt underscored that on Thursday, saying Ongwen could have fled the LRA, was not always in a position of total subordination to its leader Joseph Kony and committed some of the crimes in private.

Ongwen abducted children and women and "distributed" them among his fighters, the judge said.

"He also kept women and girls for his own household, forcing the youngest to be his domestic servants, while those that were deemed old enough were forced to be his so-called wives, obliged to have sex with him, and bear his children," Schmitt added.

Ongwen is the first commander of the LRA to face justice at the global court and his convictions for gender-based crimes are significant for prosecutors keen to punish such atrocities.

Founded by Kony, himself a fugitive from the ICC, the Lord's Resistance Army began in Uganda as an anti-government rebellion. When the military forced the group out of Uganda in 2005, the rebels scattered across parts of central Africa.

Kony gained international notoriety in 2012 when the U.S.-based advocacy group Invisible Children made a video highlighting the LRA's crimes that went viral. By that time, the group had already been weakened by defections. Uganda's military estimated in 2013 that the group comprised no more than a few hundred fighters.

Reports over the years have claimed Kony was hiding in Sudan's Darfur region or in a remote corner of Central African Republic, where LRA fighters continued to kill and abduct in occasional raids on villages, and where Ongwen was arrested in 2015.

Judges said Ongwen's role in a litany of brutal crimes would have merited a life sentence had it not been for his own childhood.

They said he was an intelligent child who could have grown up into a valuable member of society had he not been abducted on his way to school.

"All these possibilities, all his positive potential, all his hopes for a bright future came to a brutal halt on the day when he was abducted," Schmitt said.