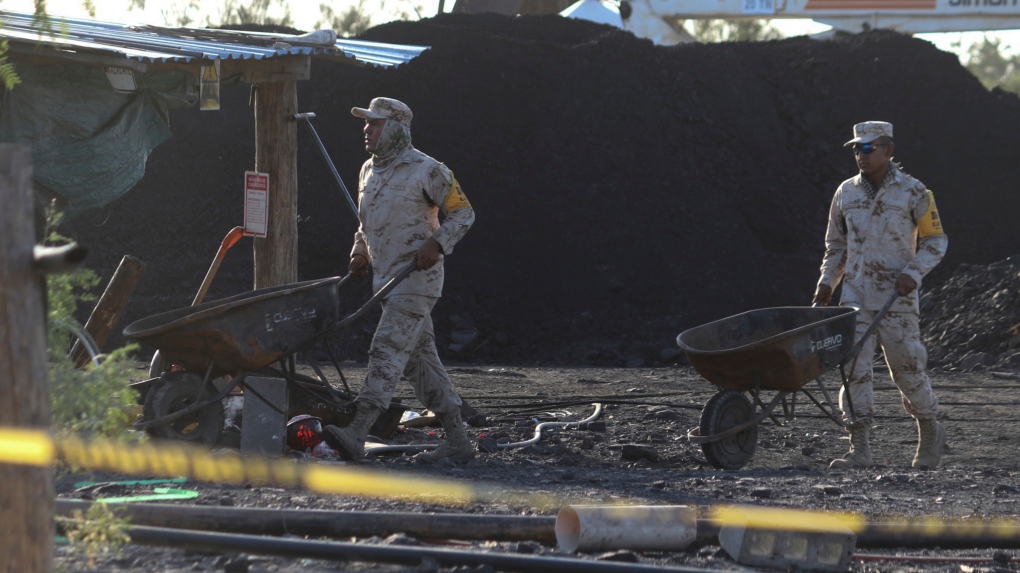 Mexican soldiers move karts as they help in the rescue of 10 miners trapped in a collapsed and flooded coal mine in Sabinas, Coahuila state, Mexico, Thursday, Aug. 4, 2022. (AP Photo/Alfredo Lara)
MEXICO CITY -

They made four attempts Wednesday and managed to remove more than a dozen pieces of wood and some 15 yards of hose, but were not able to go far.

"They found they didn't have space to advance," said Defense Secretary Luis Cresencio Sandoval. "With the lights they carry they don't have the visibility they need to identify what they find."

On Aug. 3, 15 miners were inside the coal mine in Sabinas, Coahuila about 70 miles southwest of Eagle Pass, Texas. Authorities believe the miners breached a wall containing another flooded area. Five miners managed to escape with injuries, but there has been no contact with the remaining 10.

For much of the past week authorities have used dozens of pumps to try to lower the water level inside the flooded mine shafts. Wednesday's dives were the first attempt to enter the mine.

Coahuila Gov. Miguel Riquelme said via Twitter Wednesday that pumping would resume before more attempts were made to enter.

In June and July of 2021, cave-ins at two Coahuila mines claimed the lives of nine miners.

Mexico's worst mining accident also occurred in Coahuila on Feb. 19, 2006, when an explosion ripped through the Pasta de Conchos mine while 73 miners were inside. Eight were rescued with injuries including serious burns. The rest died and only two of their bodies were recovered.

Lopez Obrador's administration promised two years ago to recover the remaining 63 bodies, a highly technical endeavor that has still not begun.