Indonesia's capital moving as Jakarta is sinking and polluted 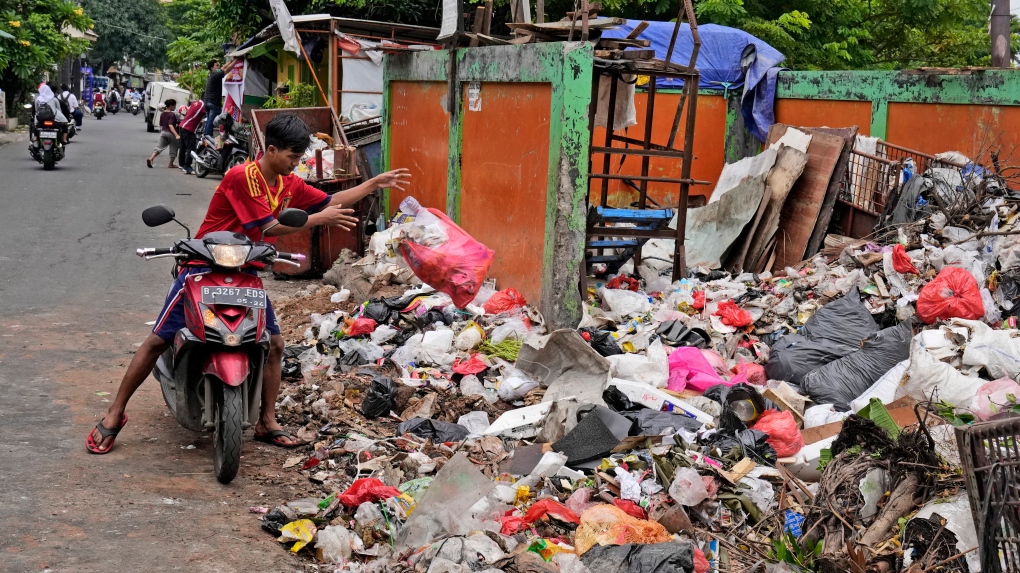 A man adds a bag of waste to an open garbage dump in Jakarta, Indonesia, on Jan. 25, 2022. (AP Photo/Dita Alangkara)
JAKARTA, Indonesia -

Jakarta is congested, polluted, prone to earthquakes and rapidly sinking into the Java Sea. Now the government is leaving, and moving the country's capital to the island of Borneo.

President Joko Widodo envisions the construction of a new capital as a panacea for the problems plaguing Jakarta, reducing its population while allowing the country to start fresh with a "sustainable city" that has good public transportation, is integrated with its natural environment and is in an area that's not prone to natural disasters.

"The construction of the new capital city is not merely a physical move of government offices," Widodo said last week ahead of parliament's approval of the plan. "The main goal is to build a smart new city, a new city that is competitive at the global level, to build a new locomotive for the transformation ... toward an Indonesia based on innovation and technology based on a green economy."

Skeptics worry, however, about the environmental impact of plunking a sprawling 256,000-hectare city down in Borneo's East Kalimantan province, which is home to orangutans, leopards and a wide array of other wildlife, as well as committing US$34 billion to the ambitious project amid a global pandemic.

"The new capital city's strategic environmental study shows that there are at least three basic problems," said Dwi Sawung, an official with the WALHI environmental group.

"There are threats to water systems and risks of climate change, threats to flora and fauna, and threats of pollution and environmental damage," she said.

First proposed in 2019, Widodo's plan to establish the city of Nusantara -- an old Javanese term meaning "archipelago" -- will entail constructing government buildings and housing from scratch. Initial estimates were that some 1.5 million civil servants would be relocated to the city, some 2,000 kilometres northeast of Jakarta, though ministries and government agencies are still working to finalize that number.

It will be located in the vicinity of Balikpapan, an East Kalimantan seaport with a population of about 700,000.

Indonesia is an archipelago nation of more than 17,000 islands, but currently 54% of the country's more than 270 million people live on Java, the country's most densely populated island and where Jakarta is located.

Jakarta itself is home to about 10 million people and three times that number in the greater metropolitan area.

It has been described as the world's most rapidly sinking city, and at the current rate, it is estimated that one-third of the city could be submerged by 2050. The main cause is uncontrolled ground water extraction, but it has been exacerbated by the rising Java Sea due to climate change.

Beyond that, its air and ground water are heavily polluted, it floods regularly and its streets are so clogged that it is estimated congestion costs the economy US$4.5 billion a year.

In constructing a purpose-built capital, Indonesia will be taking a path that others have in the past, including Pakistan, Brazil and Myanmar.

State funds will pay for 19% of the project, with the rest coming from cooperation between the government and business entities and from direct investment by state-run companies and the private sector.

Public Works and Housing Minister Basuki Hadimuljono said initial planning had been carried out by clearing 56,180 hectares (138,800 acres) of land to build the presidential palace, the national parliament and government offices, as well as roads linking the capital to other cities in East Kalimantan.

The idea is to have the core government area done by 2024, Hadimulijono said. Current plans are for about 8,000 civil servants to have moved to the city by then.

Widodo previously said he expected the Presidential Palace would be moved to the new capital city before he ends his second term in 2024, along with the Home, Foreign, and Defence Ministries and the State Secretariat.

The whole relocation process is scheduled to be completed by 2045.

What effect it will have on Jakarta and the people who stay behind is unclear, said Agus Pambagio, a public policy expert from the University of Indonesia, who urged that anthropologists be brought on to study the issue.

"There will be very big social changes, both for people who work as civil servants, society in general and local residents," he said.