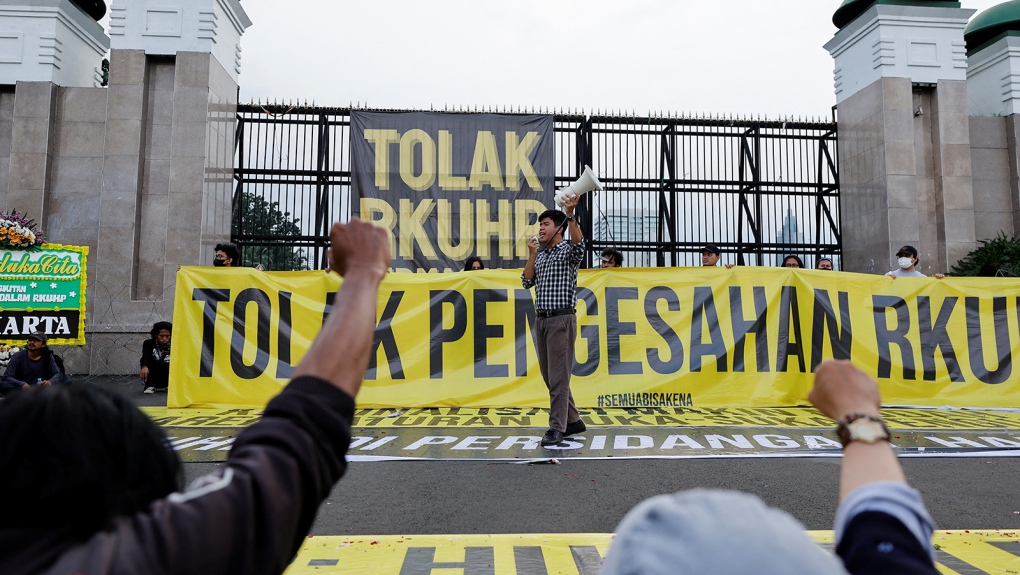 Indonesian lawmakers unanimously passed a sweeping new criminal code that criminalizes sex outside marriage, as part of a tranche of changes that critics say threaten human rights and freedoms, and pictured, an activist in Jakarta, Indonesia on December 5. (Willy Kurniawan/Reuters)

Indonesian lawmakers unanimously passed a sweeping new Criminal Code on Tuesday that criminalizes sex outside marriage, as part of a tranche of changes that critics say threaten human rights and freedoms in the southeast Asian country.

The new code, which also applies to foreign residents and tourists, bans cohabitation before marriage, apostasy, and provides punishments for insulting the president or expressing views counter to the national ideology.

"All have agreed to ratify the (draft changes) into law," said lawmaker Bambang Wuryanto, who led the parliamentary commission in charge of revising the colonial-era code. "The old code belongs to Dutch heritage … and is no longer relevant."

The world's largest Muslim-majority nation, Indonesia has seen a rise in religious conservatism in recent years. Strict Islamic laws are already enforced in parts of the country, including the semi-autonomous Aceh province, where alcohol and gambling are banned. Public floggings also take place in the region for a range of offences including homosexuality and adultery.

The changes to the Criminal Code have not only alarmed human rights advocates, who warned of their potential to stifle personal freedoms, but also travel industry representatives – who worried about their potential effect on tourism.

In a news conference Tuesday, Law and Human Rights Minister Yasonna Laoly said it wasn't easy for a multicultural and multi-ethnic country to make a Criminal Code that "accommodates all interests."

He said he hoped that Indonesians understood that lawmakers had done everything they could to accommodate "public aspiration," and invited dissatisfied parties to submit a judicial review to the constitutional court.

In the lead up to Tuesday's vote, rights groups and critics warned that the new code would "disproportionately impact women" and further curtail human rights and freedoms in the country of more than 270 million people.

"What we're witnessing is a huge setback to Indonesia's hard-won progress in protecting human rights and fundamental freedoms after the 1998 revolution. This Criminal Code should have never been passed in the first place," said Usman Hamid, executive director of Amnesty International Indonesia.

What's in the Criminal Code?

The new Criminal Code runs to 200 pages and has been years in the making.

A previous draft was set to be passed in 2019 but the vote was postponed after thousands of protesters, mostly students, took to the streets demanding the government withdraw it.

In a televised address at the time, President Joko Widodo said he would delay the vote after "seriously considering feedback from different parties who feel objections on some substantial content of the Criminal Code."

Hamid from Amnesty noted there had been "no meaningful changes" enacted since 2019.

Under the version passed Tuesday, sex outside marriage carries a potential one-year prison term though there a restrictions on who can lodge a formal complaint. For example, the parents of children who are cohabitating before marriage have the authority to report them.

As well as introducing new offences, the code also expands on existing laws and punishments. Blasphemy laws have increased from "one to six provisions" and can now lead to a maximum five-year prison sentence, according to a draft document.

Hamid said laws on insulting the country's leaders and unsanctioned protests will have a "chilling effect" on free speech.

"The reinstatement of provisions banning insults to the president and vice president, the sitting government as well as state institutions would further create a palpable chilling effect on freedom of speech and criminalize legitimate criticisms," he said.

Human Rights Watch Indonesia Researcher Andreas Harsono said the laws are "a setback for already declining religious freedom in Indonesia," warning they could be misused to target certain individuals.

"The danger of oppressive laws is not that they'll be broadly applied, it's that they provide avenue for selective enforcement," he said.

Hadi Rahmat Purnama, from the University of Indonesia's law faculty, said the laws would be implemented after a transitional period of three years.

The laws are expected to trouble the business community, especially those who regularly host and cater for foreign nationals and tourists.

The island of Bali, for example, relies heavily on tourist revenue and is still recovering from the pandemic slowdown that kept travellers away.

Putu Winastra, chairman of the Association of the Indonesian Tour and Travel Agencies (ASITA) in Bali, told CNN the laws would "make foreigners think twice" about visiting Indonesia.

"From our point of view as tourism industry players, this law will be very troublesome," said Putu, who questioned how the laws would be policed.