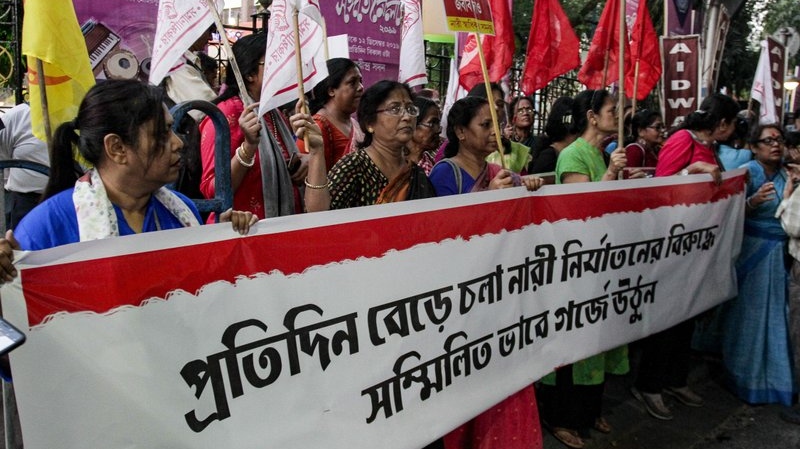 Activists demanding justice in the case of a veterinarian who was gang-raped and killed last week shout slogans during a protest in Kolkata, India, Thursday, Dec. 5, 2019. (AP Photo/Bikas Das)

SHADNAGAR, INDIA -- Police on Friday fatally shot four men suspected of raping and killing a woman in southern India, drawing both praise and condemnation in a case that has sparked protests across the country.

The suspects were in police custody and had not been formally charged with any crime.

The burned body of the woman -- a 27-year-old veterinarian -- was found last week by a passer-by near the city of Hyderabad, India's tech hub, after she went missing the previous night.

At around 3 a.m. Friday, police took the suspects to the sites where the rape and killing are believed to have taken place and the spot in an underpass where the woman's body was burned about half a kilometre (a third of a mile) away, according to Shreedharan, an official in the police commissioner's office who uses one name.

"The suspects seized some weapons from policemen who had taken them there and started firing," V.C. Sajjanar, the local police commissioner, said at a news conference. People asked them surrender. Instead of surrendering, they continued to fire. Then in the return fire, the police killed the four of them,"

Hours after the police shootings, the crime scene in Shadnagar, a town in the state of Telangana about an hour southwest of Hyderabad, had the appearance of a fairground.

About 300 people gathered to celebrate the suspects' deaths.

Some hugged officers and lifted them into the air, chanting "Long live police," while others showered them with flowers.

Indians had rallied on the streets of Hyderabad, New Delhi and Mumbai and called on social media for swift justice in a country where sentencing is notoriously delayed by backlogged courts.

After the veterinarian's killing, Swati Maliwal, the head of the Delhi Commission for Women, started an indefinite hunger strike, demanding that the perpetrators be hanged within six months.

Maliwal said Friday that police "had no choice but to shoot."

She said she is continuing her fast to demand swift hangings in other sexual violence cases because she thinks capital punishment will act as a deterrent.

"Hang the rapists!" shouted some of the hundreds of Maliwal's mainly women supporters who gathered Friday at the site of her strike, the mausoleum of Indian independence leader Mahatma Gandhi.

The Congress party and other opposition groups raised the police killings in Parliament, and demanded a probe into the incident.

The National Commission on Human Rights, an autonomous body within India's Parliament, said it was sending a fact-finding mission to the crime scene.

"This type of justice is counterfeit," said Kavita Krishnan, secretary of the All India Progressive Women's Association.

"The killings are a ploy to shut down our demand of accountability from governments, judiciary and police, and dignity and justice for women. We demand a thorough investigation into this," she said.

Maneka Gandhi, a lawmaker from India's ruling Bharatiya Janata Party and a former Cabinet minister, accused police of taking the law into their own hands.

"They would've been hanged by court anyway. If you're going to kill the accused before any due process of law has been followed, then what's the point of having courts, law and police?" she said.

Avinash Kumar, executive director of Amnesty International India, echoed the sentiment in a statement, saying that "extrajudicial killings are not a solution to preventing rape."

After the 2012 gang rape and killing of a 23-year-old student on a New Delhi bus, minimum sentences were raised in cases of sexual violence. The four men convicted in the case have appealed their sentences, which were death by hanging.