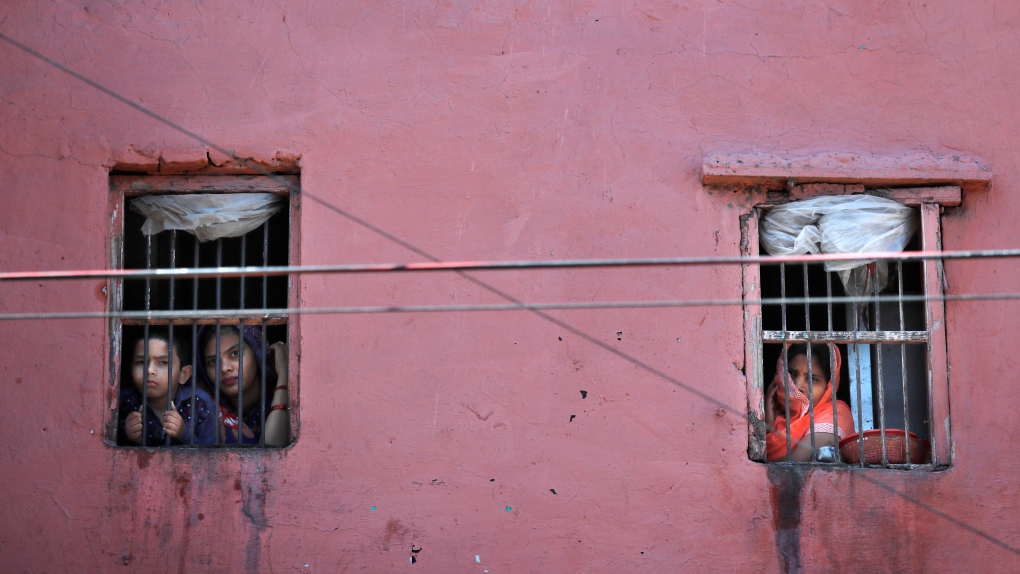 A family looks out from the window of his house in the old quarters of Delhi following a lockdown amid concern over spread of coronavirus, India, Friday, March 27, 2020. (AP Photo/Manish Swarup)

India has recorded 100,000 new coronavirus cases in the past four days, as the country struggles to gain control of the worsening pandemic.

The Indian Ministry of Health and Family Welfare on Tuesday announced another 28,498 cases in the past 24 hours, bringing the country's total to 906,752.

Sunday marked the fourth consecutive day of highest daily jumps in cases and if the trend continues, it's likely India will hit 1 million COVID-19 infections by the end of the week.

India now has the third highest number of coronavirus cases in the world, after the United States and Brazil, according to the health ministry. There have been a reported total of 23,727 deaths relating to COVID-19.

The devastating wave of infections comes as lockdown restrictions country-wide have eased and operations steadily increasing over the past few weeks.

However, the jump in cases caused the city of Bengaluru to reintroduce lockdown measures for seven days, starting Tuesday, to contain a massive cluster of COVID-19 cases, authorities said.

Shopping malls and cinemas will be closed, public transport suspended, and shops selling essentials such as grocers will have reduced hours.

The virus has seen some of Bollywood's biggest stars admitted to hospital after testing positive for coronavirus over the weekend.

Superstar Amitabh Bachchan was in a "stable" condition in the isolation unit at Nanavati Hospital in the city of Mumbai, the facility said in a statement, after he and his son Abhishek Bachchan were both admitted following positive tests late Saturday evening.

Last week, Health Ministry official Rajesh Bhushan said in a press briefing that "localized outbreaks" had occurred in "a few geographical areas" but that India was doing a better job of managing the outbreak than other countries.

"In India, there are 49 districts which alone account for 80 per cent of Covid cases," said Bhushan. "In spite of a population of 1.3 billion people, India has been able to manage COVID relatively well."

Bhushan said India's rate of cases in the population "still remains amongst the lowest in the world." On July 9, India recorded 538 cases per million people, said Bhushan.

"We are trying also to emphasize the point that case per million population in some countries are at least 16-17 times more than what it is in India," he said.

"We have 15 deaths per million population, whereas we have countries where it is 40 times as much."

The overall number of tests conducted in India rose to over 12 million on Tuesday, according to The Indian Council of Medical Research. And there are 311,565 active cases in India, with 571,460 people having recovered, according to the health ministry.

But the pandemic has hit India's health systems hard, with reports of desperate families being turned away from hospitals for lack of beds or equipment in the capital new Delhi and the financial capital Mumbai.

Last week, India opened a 10,000-bed hospital -- one of the such facilities in the world. The Sardar Patel COVID Care Centre in Delhi will be used to help fight the virus and ease the burden on the city's health system.

As global coronavirus cases surpassed 13 million, World Health Organization Director-General Tedros Adhanom Ghebreyesus warned that the pandemic will only get "worse and worse" if the "basics aren't followed."

"Let me blunt, too many countries are headed in the wrong direction," Tedros said in a virtual briefing from Geneva on Monday. "The virus remains public enemy number one, but the actions of many governments and people do not reflect this."

He called on governments to "clearly communicate with their citizens and roll out a comprehensive strategy focused on suppressing transmission and saving lives."

The hunt for a vaccine: Canadian company begins human testing of COVID-19 candidate

How deadly is COVID-19 for children? Here's what we know