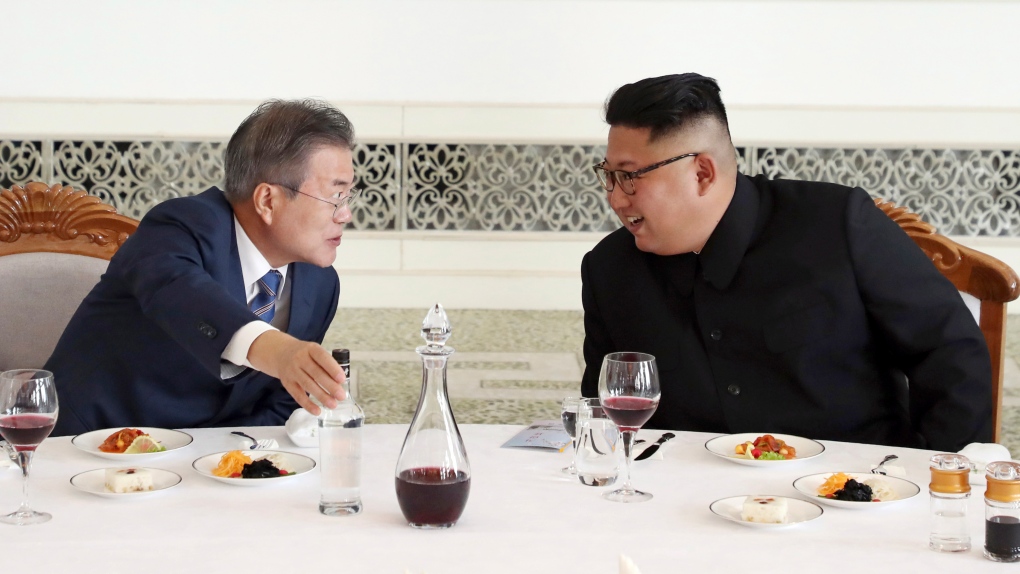 THE VIEW FROM PYONGYANG

North Koreans have been barraged with a lot of astounding images this year. First came photos of senior officials flying off to rival South Korea to meet with their counterparts at the Winter Olympics. Then it was leader Kim Jong Un himself hugging South Korean President Moon Jae-in on the southern side of the Demilitarized Zone. And soon after that, Kim was in Singapore with the president of archenemy the United States, Donald Trump.

Even a staunchly patriotic North Korean could be forgiven for not knowing what to make of it all.

But North Korea's packaging of the first images of Moon's visit to its capital this week, as broadcast on state television a full day after the rest of the world saw them, offers some guidance -- and some important insight.

The official North Korean narrative is all about ethnic pride, unity and how Kim is paving the way for a Korean-led solution to the decades-old problem of how to bring peace to the peninsula.

"Korean-led" is the key point here.

In the 30-minute edit of Moon's first two days as Kim's special guest, there was no mention of the United States, or denuclearization, or Trump. A commentary run by the ruling party newspaper on Tuesday, the day Moon arrived, took care of that -- blaming Washington's "stubborn" and "gangster-like" demands for the North to unilaterally give up its nuclear weapons as the sole cause of the breakdown in U.S.-North Korean talks.

In North Korea, the day-to-day status of negotiations with Washington isn't what people care about. Or, at least, it's certainly not what they are supposed to be fretting about. Whatever happens down the road between Kim and Trump, or Kim and whoever follows Trump, since North Korean leaders tend to outlast American presidents, this is to be regarded as a moment of triumph.

Coming so soon after last week's lavish celebration of North Korea's 70th birthday, Moon's visit is being cast as something of a tribute, a show of respect. When the first images of Moon came on the TV screens, people across Pyongyang, the capital, stopped what they were doing to watch and savour the moment.

The underlying message being delivered by the state propaganda machine is clear -- it was the wisdom of Kim that has opened up the way to a brighter future and it is only the stubborn interference of imperialists and reactionaries that can stand in the way. For most North Koreans, that's probably a comforting and hopeful thought. It is, course, also nothing if not familiar.

It has pretty much always been North Korea's official message to its people.

Of course, the North can't simply ignore the big, pressing issues that loom before it.

In contrast to the optimistic message being fed to the masses, there has been a feeling of tension in Pyongyang these days. Security has been tight, well before Moon's arrival, and officials are enforcing more restrictions on the ability of foreign journalists to talk to people on the street and for foreign diplomats to move around outside the capital.

The North Korean leadership is well aware that the stakes are high, and that a breakdown in talks with Washington could have dire consequences. Though it wasn't packaged that way for the domestic audience, Kim's meeting with Moon could just as easily be seen as a big message for Trump, one that was perfectly in keeping with what North Korea has been proposing since the Trump summit ended.

We can make a deal, the two Korean leaders seemed to suggest. But forget about what your hard-line advisers are saying.

THE VIEW FROM SEOUL

The Korean leaders' surprisingly substantive summit announcement is a huge step toward a durable peace on the Korean Peninsula -- and a Nobel Peace Prize for Kim Jong Un and Moon Jae-in. No, no, it's the death rattle of the once formidable U.S.-led pressure campaign against the North as it crumbles under the false optimism of inter-Korean engagement. Or maybe it's just the latest empty promise from a North Korean regime famous for backstepping?

How you see the third summit this year between Moon and Kim -- and there could be another in the works, with Kim promising to come to Seoul soon -- may depend on where you're sitting, both geographically and politically.

The view from Seoul will largely be relief, mixed with a sort of built-in wariness that many here wield as a default reaction to anything having to do with their northern neighbours. South Korea is a deeply divided place politically, with a chasm between conservatives who hate the North and liberals who want to reach out. But for Moon, whose aides have been hinting at his eagerness to secure protection from the North's conventional weapons, this looks like a domestic win, provided the two sides can follow through.

After all, much of what Moon and Kim agreed to on Wednesday -- beginning to disarm their border, the world's most heavily armed, removing land mines, setting up buffer zones to prevent accidental skirmishes and dismantling, under outside inspectors' supervision, a North Korean missile launch pad -- could tangibly improve South Koreans' safety.

"The South and North today have agreed to remove every threat in all areas of the Korean Peninsula that can cause war," Moon declared as he stood by Kim's side in a guesthouse in the North Korean capital of Pyongyang. "By creating the Korean Peninsula as a permanent space for peace, we will be able to return the normality of our lives."

While there are fears of nuclear war among some in the South, a much more common worry is that some sort of clash along the border, where millions of troops and pieces of artillery face each other, could spiral out of control and restart the Korean War, which still officially continues because it was ended in 1953 by a cease-fire, not a peace treaty.

South Koreans are famous for their ability to keep calm and carry on in the face of North Korean belligerence, but it would be a mistake to think there isn't concern -- and a clear recognition of the potential danger -- when animosity rises.

About 25 million people live in the greater Seoul area, which is in easy artillery range of the nearby border. And while South Koreans mostly ignore North Korea's vows to turn Seoul into a "sea of fire," they also know that it could technically be done, more or less; the first time Pyongyang made that now-common threat, in 1994, it caused panic in Seoul.

Many here will wisely reserve judgment on whether the South Korean president's lofty claim to have removed "every threat" of war is correct -- recent Korean history is littered with grand-sounding rhetoric that dissolved in the winds of the rivals' enmity -- but if Moon and Kim can pull off what they've agreed to this week, there could be an outbreak of that rarest of feelings when it comes to inter-Korean ties: optimism.

North and South Korea plan to bid for 2032 Summer Olympics