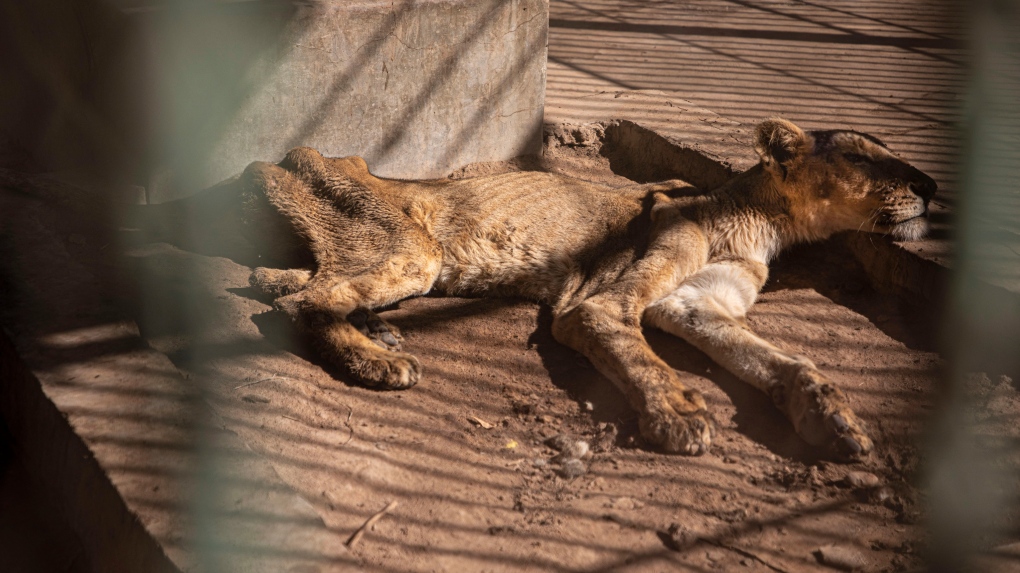 In this Tuesday, Jan. 21 photo, a malnourished lion rests in a zoo in Khartoum, Sudan. With the staff at the destitute Al-Qurashi Park, as the zoo in Khartoum is known, unable to feed and look after the animals, many have died off or were evacuated, leaving only three skeletal lions. (AP Photo)

KHARTOUM, SUDAN -- At an impoverished, forlorn zoo in Sudan's capital, several lions are starving in rusted cages -- their ribs protruding, eyes glassy and skin flaccid, they are desperate for food and water.

The unsettling images, shared on social media by a local animal rights advocate, drew impassioned responses from thousands around the world. But it wasn't enough to save two lionesses at the Khartoum zoo, said local activist Zuhair al-Sarag.

"This is actually a crime," he said, adding that the park once teemed with animals. "Someone should be held accountable."

With the staff at the destitute Al-Qurashi Park, as the zoo in Khartoum is known, unable to feed and look after the animals, many have died off or were evacuated, leaving only three skeletal lions, including a lioness.

Months later, a civilian-military transitional council replaced al-Bashir's rule, and inherited its problems, including $60 billion in debt, rebellions in far-flung provinces and the country's longtime status as a global pariah.

Price hikes and economic hardship have caused animals to suffer, too.

"Many international organizations are willing to help" the lions, including an emergency rescue group expected in Sudan soon, said Osman Mohamed Salih, the first activist who appealed for help online.

While many abroad have tried to donate via crowdfunding sites, Salih noted that U.S. sanctions on Sudan have prevented the zoo from receiving funds through popular platforms, such as GoFundMe. There was no immediate response from GoFundMe.

Sudanese Prime Minister Abdullah Hamdok, formerly a World Bank economist, has made it his mission to get the United States to drop its designation of Sudan as a state sponsor of terrorism, so that the country can attract badly needed foreign aid and investment. The economic troubles are testing the government during its fragile transition to democracy.

"Despite all of this, the marathon of recovery, healing and redevelopment ... continues," Salih, the activist, wrote on Facebook.

On Wednesday, he shared a photograph of the remaining lioness after volunteers had brought food, saying she was making "beautiful progress."