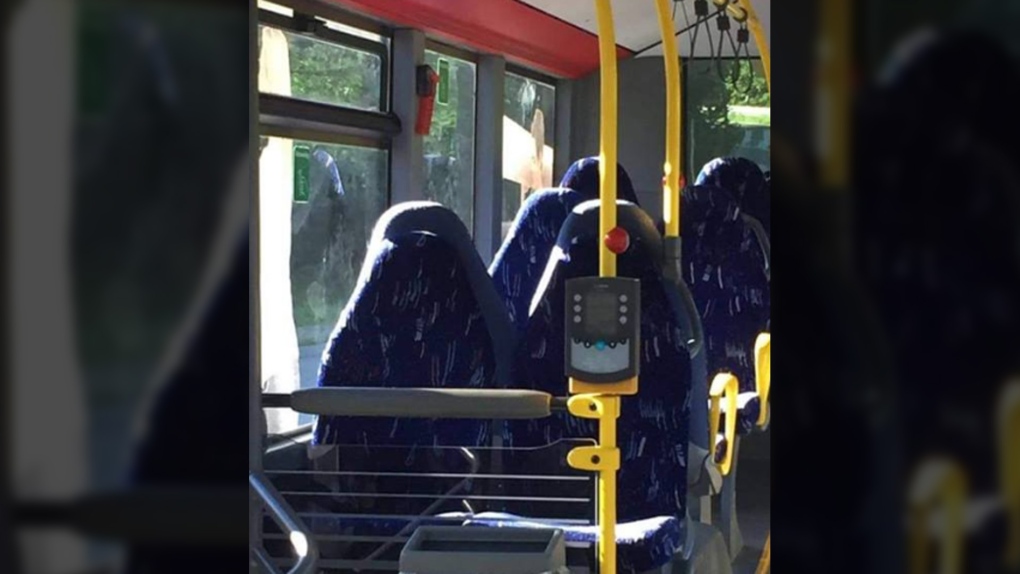 This image of bus seats sparked a wave of anti-Islam sentiment in a Facebook group for Norwegian nationalists. (Sindre Beyer / Facebook)

An overly zealous group of Norwegian nationalists is facing online ridicule after mistaking a photo of seats on a city bus for women wearing burqas.

Screenshots from the Norwegian Facebook group Fedrelandet Viktigst, which translates to “The Fatherland, Most Importantly,” show members of the group expressing xenophobic fears in response to the photo. The image depicts several darkly-coloured seats on a city bus, lit in such a way that some might mistake it for rows of women in burqas.

The Facebook group is labelled as meant for “anyone who loves Norway, and appreciates what our ancestors have been fighting for!”

The original photo was posted by journalist Johan Salttavik, who said later that he was “trolling” the group with the image and a suggestive caption that read: “What do people think of this?”

The caption triggered a barrage of angry and anti-Islamic comments.

“Tragic,” said one person, who clearly mistook the seats for women. “Disgusting,” said a second person.

“Frightening,” added a third user, whose comments were translated into English by Google. “Not possible to see if these are men or women – if they have piles of stolen goods under the bed sheets – or at worst weapons or bombs.”

Others weren’t so easily fooled.

“An empty bus?” one person asked. “Empty seats?” said another.

One person joked that such seats should be banned by Norway’s Ministry of Transportation.

The group is closed to the public, but user Sindre Beyer shared several screenshots of angry responses to the photo.

“Almost everyone thinks they see a bunch of burqas,” Beyer wrote in Norwegian.

The Facebook group is labelled as meant for “anyone who loves Norway, and appreciates what our ancestors have been fighting for!”

Many individuals mocked the group’s eagerness to hate on a photo of bus seats.

“Can you image that empty seats can create so many hateful comments?” one woman said in Norwegian.

“They see what they want to see,” another user said.

“Don’t know if I’m gonna laugh or cry,” said a third person in a translated comment.