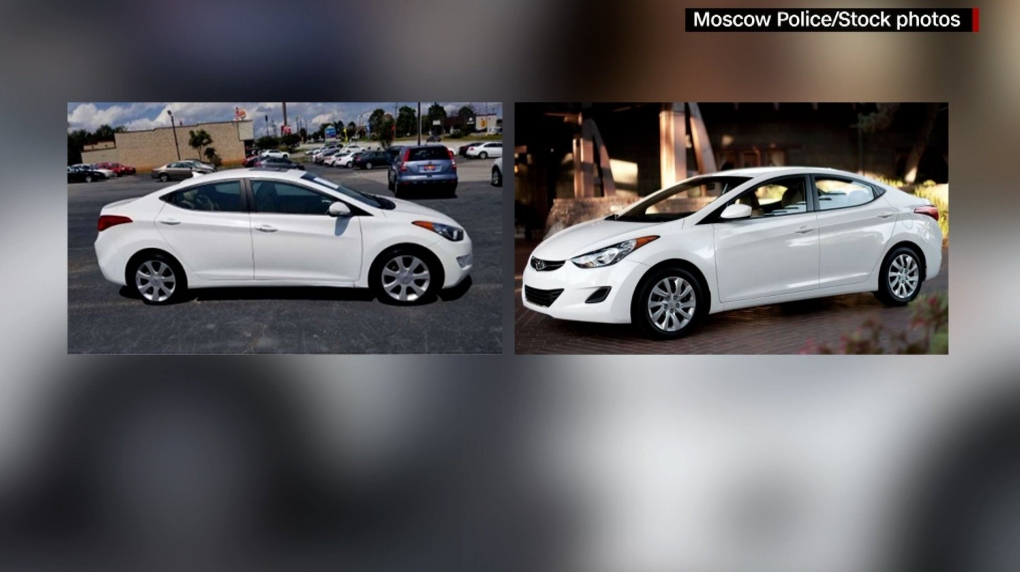 A 2011-2013 Hyundai Elantra was spotted 'in the immediate area of the off-campus home where the students were stabbed to death in the early morning hours of November 13, Moscow Police said in a statement Wednesday. (Moscow Police)

The investigation into the killings of four University of Idaho students has received an overwhelming amount of tips related to their search for a white sedan seen near the crime scene around the time of the deaths last month, police said Friday.

Due to the amount of tips received, calls are being directed to an FBI call center to help sort leads received, according to a Thursday update from the Moscow Police Department.

"The global call center has the resources to take those calls, categorize them, and send them on to investigators so they can utilize those tips in the investigation," the department said.

Dozens of local, state and federal investigators have yet to identify a suspect or find the murder weapon used in the attack last month in the small college town of Moscow. Still, investigators maintain they have made progress but cannot share details as that could compromise the investigation.

The students -- Kaylee Goncalves, 21; Madison Mogen, 21; Xana Kernodle, 20; and Kernodle's boyfriend, Ethan Chapin, 20 -- were killed just days before the school's Thanksgiving break. They were all stabbed multiple times and were likely asleep when the attack began, a coroner has said.

"We're continuously making progress," Idaho State Police spokesperson Aaron Snell told CNN. "But this is a criminal investigation, and as we make progress, we can't always provide that information."

Investigators are working through more than 6,000 tips they have received over the course of the investigation so far. "We have quality information that we're working on," said Snell.

The Moscow Police Department said on Wednesday that a 2011-2013 Hyundai Elantra was spotted "in the immediate area" of the off-campus home where the students were stabbed to death in the early morning hours of November 13.

Information about the vehicle came from the thousands of tips police have received in the case, which has appalled the small college town of Moscow, Idaho.

"Investigators believe the occupant(s) of this vehicle may have critical information to share regarding this case," the police statement said, noting it had an unknown license plate.

The Moscow Police Department is leading the investigation with assistance from the Idaho State Police, the Latah County Sheriff's Office and the FBI, which has assigned more than 40 agents to the case across the US.

On Wednesday, police began the process of returning some of the victims' belongings to their families.

"It's time for us to give those things back that really mean something to those families and hopefully to help with some of their healing," Chief James Fry said Tuesday in a brief video statement.

"I'm a dad, I understand the meaning behind some of those things," Fry said. The items being removed are "no longer needed for the investigation," the department said.

Investigators believe all four victims had been out in the hours before the killings -- two at a Moscow bar, the other two at a fraternity house -- but had returned to the home by 2 a.m. on the day of the stabbings.

A coroner determined the four victims were stabbed multiple times and likely had been asleep when the attacks began, police have said. The manner and cause of death were homicide by stabbing, the coroner said.

Detectives do not believe the surviving roommates were involved in the killings, police have said.

Police investigating whether victim had stalker

Moscow police said they are still looking into the possibility that one of the victims, Kaylee Goncalves, had a stalker.

Police outlined a situation in October when a man appeared to be following Goncalves outside a local business, according to a news release from the department. Police said this was an isolated incident, and the man and an associate were trying to meet women at the business, which police said was corroborated through additional investigation.

It was not an ongoing pattern of stalking. There is currently no evidence tying the two men to the killings, the release said.

Last month, investigators looked "extensively" into hundreds of pieces of information about Goncalves having a stalker, but "have not been able to verify or identify a stalker," police said.

Police are still asking for tips from the public on information regarding a possible stalker.

"Investigators continue looking into information about Kaylee having a stalker. Information about a potential stalker or unusual occurrences should go through the Tip Line," according to the release.