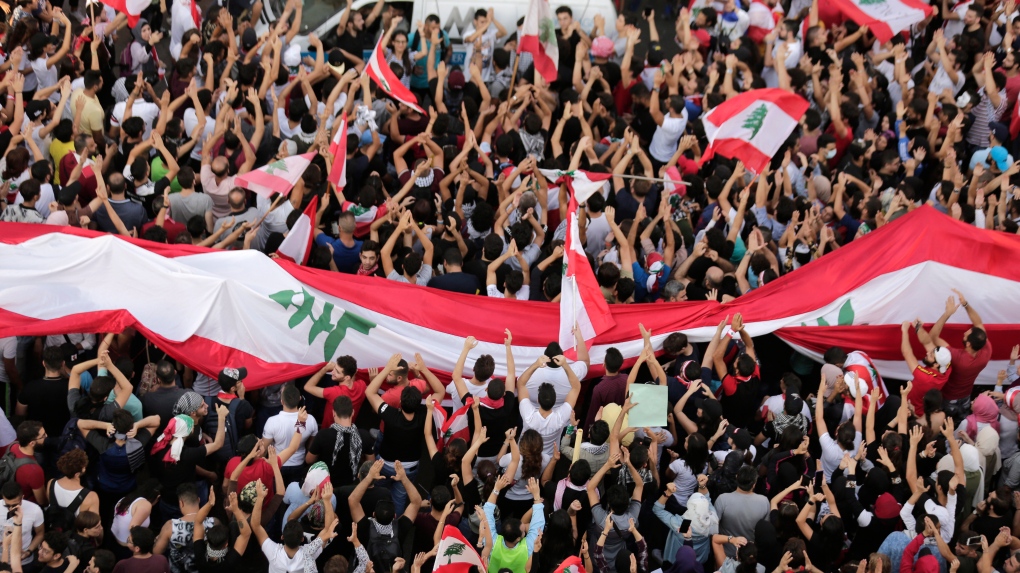 BEIRUT -- Hundreds of thousands of Lebanese protesters of all ages flooded major cities and towns nationwide Sunday demanding an end to corruption and the rule of the country's political elite. Each hour brought hundreds more people to the streets for the largest anti-government protests yet in four days of demonstrations.

Protesters danced and sang in the streets, some waving Lebanese flags and chanting "the people want to bring down the regime." In the morning, young men and women carried blue bags and cleaned the streets of the capital, Beirut, picking up trash left behind by the previous night's protests.

The spontaneous mass demonstrations are Lebanon's largest in five years, spreading beyond Beirut. They are building on long-simmering anger at a ruling class that has divvied up power among themselves and amassed wealth for decades but has done little to fix a crumbling economy and dilapidated infrastructure.

The unrest erupted after the government proposed new taxes, part of stringent austerity measures amid a growing economic crisis. The protests have brought people from across the sectarian and religious lines that define the country.

"People cannot take it anymore," said Nader Fares, a protester in central Beirut who said he's unemployed. "There are no good schools, no electricity and no water."

In the northern Beirut suburb of Jal el-Deeb, hundreds of people held a boisterous protest gathering on the main highway that links Beirut with the northern city of Tripoli. The filled a nearby overpass with Lebanese flags, forming a sea of red and white. As in other locations, there was no sign of any pollical party's flag.

Claire Abu Rached came with her two sons, ages 10 and 8, to support the protesters.

"They (the politicians) have been stealing from the people for 30 years," she said, referring to period after the 1975-90 civil war. "They stole and stole and stole and they still don't have enough. We are here to tell them enough is enough!"

Politicians are now racing against time to put forward an economic rescue plan that they hope will help calm the public.

Many of the protesters have already said they don't trust the current government's reforms, and are calling on the 30-member Cabinet to resign and be replaced by a smaller one made up of technocrats instead of members of political groups.

"I hope the government will resign and I think we are ready and the whole country is ready for something else at last," said real estate agent Fabian Ziayde.

On Sunday, the Progressive Socialist Party of Druze leader Walid Joumblatt said his two Cabinet ministers would only stay in the government if it enacts reforms. Those include no new taxes and no deductions from retirement salaries, plus an end to overspending.

One of Joumblatt's ministers, Wael Abu Faour, said they are against the government resigning because a political vacuum could lead to financial collapse.

On Saturday night, a Lebanese Christian leader asked his four ministers in the Cabinet to resign. Samir Geagea, who heads the right-wing Lebanese Forces Party, said he no longer believes the current national unity government headed by Prime Minister Saad Hariri can steer the country out of the deepening economic crisis.

In a speech Friday night, Hariri had given his partners in the government a 72-hour ultimatum to come up with convincing solutions to the economic crisis. A day later, Hariri said he was meeting Cabinet ministers to "reach what serves the Lebanese."

On Sunday, Hariri continued his meetings to finish suggestions to revive the country's crumbling economy, which has been suffering from high unemployment, little growth and one of the highest debts ratios in the world standing at 150% of the gross domestic products.

Since Saturday, the protests have been mostly peaceful with many protesters bringing their children with them to the gatherings.