Hundreds of Macau greyhounds up for adoption after dog track closure 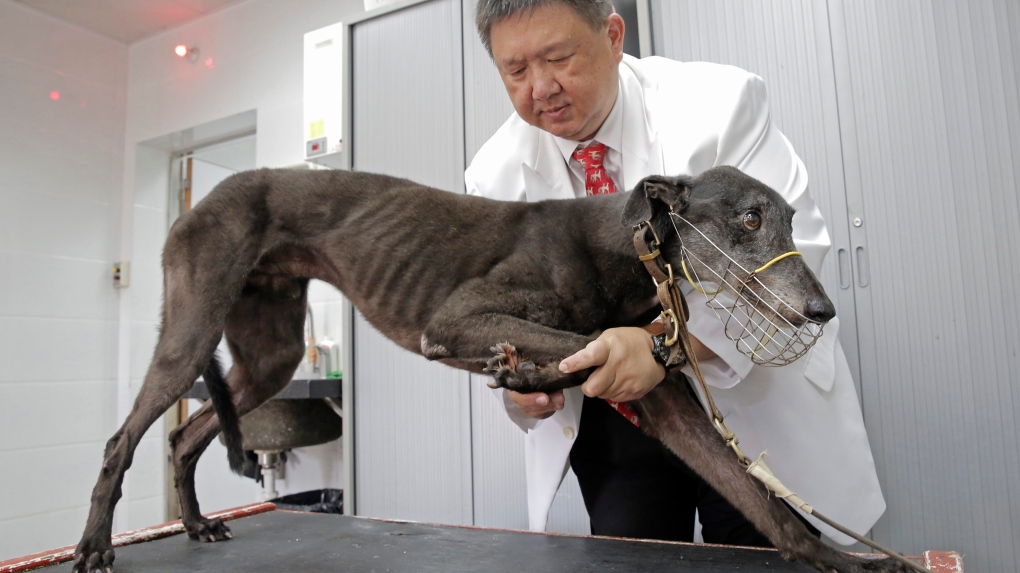 In this June 2, 2018, photo, a greyhound receives a medical check at the Macau Yat Yuen Canidrome in Macau. Asia‚Äôs only legally regulated greyhound racetrack, a centerpiece of Macau's gaming tourism history, is to shut its doors in July, 2018. (AP Photo/Kin Cheung)

MACAU -- Dog races were held here for half a century, up to five nights a week -- a constant in this former Portuguese colony even as high-stakes casinos and concert venues sprouted up to offer newer, glitzier entertainment options.

Development and changing tastes have finally caught up with the Yat Yuen Canidrome Club, whose closure this month means the end of a controversial fixture in Macau -- and of legal, regulated dog racing in Asia.

Local authorities, along with animal rights groups, are now in the process of finding homes for 533 greyhounds abandoned in kennels on the premises. For months, activists and local officials have been asking volunteers to take care of the remaining dogs or adopt them.

One greyhound who has already found a home is retired racer Garlic, who loves strolling down the territory's Hac Sa, or "Black Sand," beach.

"He walks slow and he loves to take me to the seaside for walks every night," owner Edith Lam says. "I suffered from depression before. I'm not sure whether he saved my life or I saved his."

Tucked next to an old Portuguese fort, the Canidrome was for years the only track on the continent to allow betting on greyhound races. On Tuesdays, Thursdays and Saturdays, a total of 72 dogs raced in 12 heats, sprinting after a mechanical rabbit-shaped lure.

To keep in racing form, the dogs received brief exercise with walks and swims and made visits to the in-house veterinarian.

The company says many greyhounds retire in peace after their racing life ends after three or four years of competition. But animal rights groups have long accused the club of mistreating dogs and euthanizing underperformers or older racers, and campaigned for the club's closure.

The Macau government ordered the Canidrome to move out of the downtown area two years ago amid a push for urban redevelopment.