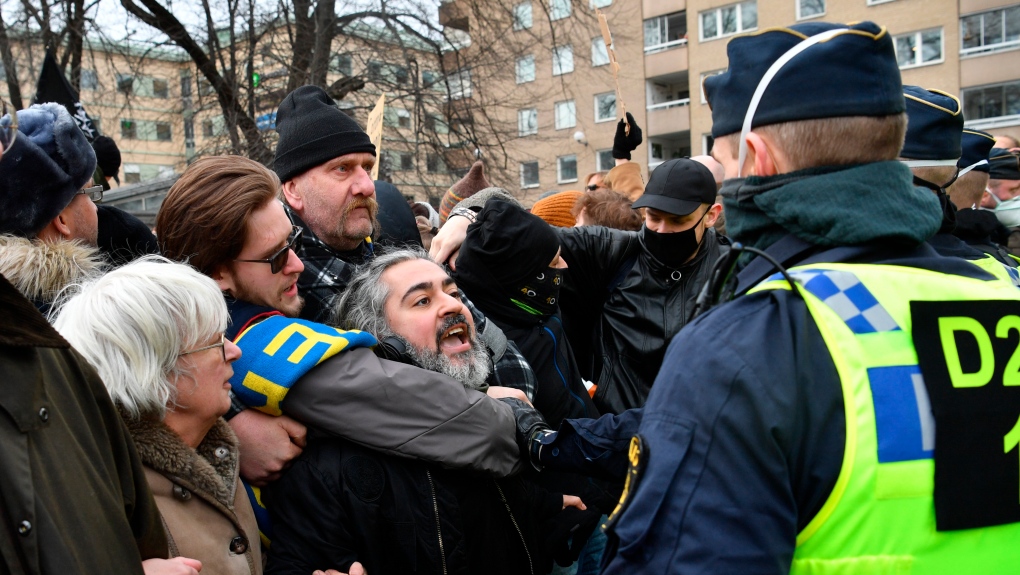 Anti-lockdown protesters face police during a demonstration against the coronavirus restrictions in Stockholm Saturday March 6, 2021. The protest was disbanded by police due to lack of permit for the public gathering. (Henrik Montgomery / TT via AP)

STOCKHOLM -- Swedish police on Saturday dispersed hundreds of people who had gathered in central Stockholm to protest coronavirus restrictions set by the Swedish government.

Swedish authorities said the demonstration -- the first major protest against the country's coronavirus restrictions -- was illegal as it was held without permission.

Stockholm police said on their website they decided to cut short the gathering just after it started when the number of participants exceeded the limits for public gatherings under Sweden's pandemic laws.

Swedish tabloids Aftonbladet and Expressen reported that the demonstration was dispersed largely peacefully but six police officers were injured after scuffles broke out with some protesters who didn't want to leave.

Aftonbladet said the rally was organised by a group named Freedom Sweden, which it said believes that COVID-19 rules restrict human freedom.

"There are so many people in Sweden who have had enough of these restrictions, which are really unfounded, and want to put their foot down and show that we don't agree to it anymore," Filip Sjostrom, an organizer from Freedom Sweden, told Expressen.

According to Expressen, the protesters included far-right activists, people against vaccines and some families with children.

In the beginning of the pandemic, Sweden, unlike most other European countries, opted to keep its society largely open with few restrictions but the government has taken a substantially harder stance in the past few months.

Sweden has seen over 13,000 deaths in the pandemic, while its Nordic neighbours Denmark, Norway and Finland, who chose to impose coronavirus restrictions much earlier, have a combined COVID-19 death toll of 3,777.

One year later: Why Canada's COVID-19 crisis is being called a 'senicide'

New Iceland: Drawing parallels between the COVID-19 pandemic and smallpox

COVID-19 in Alberta: Hospitalizations fall below 250 on Saturday for first time in months

Number of Americans hesitant to get COVID-19 vaccine dropping rapidly