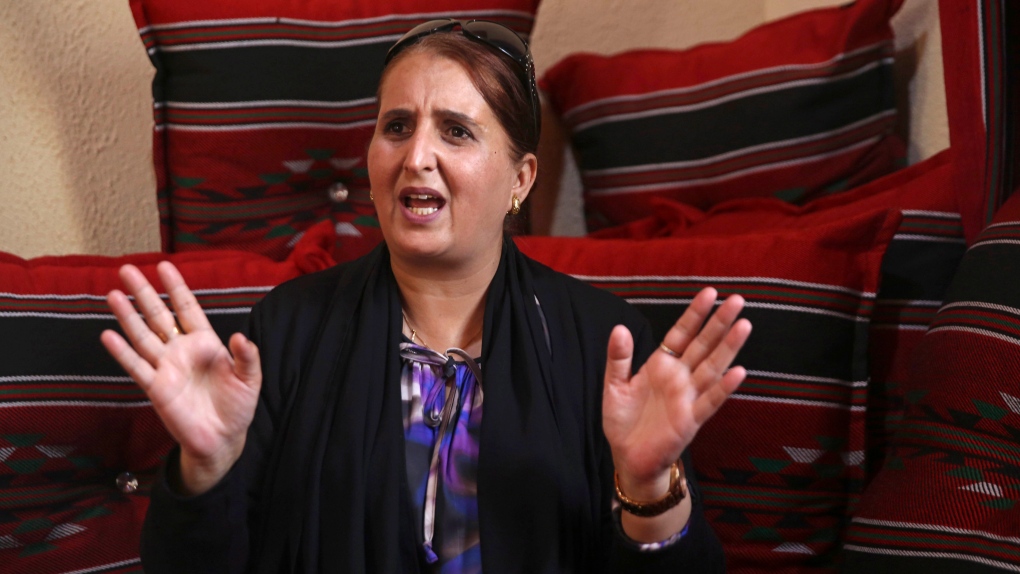 Taghreed Abu Teer, recalls being held by Hamas authorities for 11 days and interrogated under "humiliating circumstances‚" for her activities with the rival Fatah movement during an interview with The Associated Press at a relative's home in Khan Younis, southern Gaza Strip. (Adel Hana/THE ASSOCIATED PRESS)

The charges came in a new report released by the New York-based watchdog, following a two-year investigation that included interviews with nearly 150 people, many of them ex-detainees. It accused both the Western-backed Palestinian Authority in the West Bank and the Islamic militant Hamas in Gaza of using "machineries of repression" to stifle criticism.

Human Rights Watch also said the systematic use of torture could amount to a crime against humanity under the United Nations' Convention against Torture, and called on countries that provide funding to Palestinian law enforcement to suspend their assistance.

Palestinian President Mahmoud Abbas' government joined the convention after Palestine was accepted as a nonmember state at the U.N.

"Palestinian authorities have gained only limited power in the West Bank and Gaza, but yet, where they have autonomy, they have developed parallel police states," said Tom Porteous, deputy program director at Human Rights Watch. "Calls by Palestinian officials to safeguard Palestinian rights ring hollow as they crush dissent."

According to HRW, the Palestinian leaderships in the West Bank and Gaza engage in similar tactics, in most cases without holding anyone to account.

Among the alleged abuses: whipping people's feet, forcing detainees into painful stress positions, hoisting up people's arms behind their backs with rope and coercing suspects into granting access to their mobile phones and social media accounts.

"These numbers do not speak to the scale which both authorities have gone to in order to shut down dissent," Shakir said.

Both Hamas and the Fatah-led Palestinian Authority denied the accusations.

The two Palestinian factions split in 2007 after Hamas violently seized the Gaza Strip from forces loyal to Abbas. For more than a decade, Hamas has maintained an iron grip on power and suppressed any signs of public dissent, including street protests and on social media.

Despite having Western backing, Abbas has also silenced dissent in the areas of the West Bank he administers under past agreements with Israel. Last year, he clamped down on social media and news websites with a vaguely worded decree that critics say allows his government to jail anyone on charges of harming "national unity" or the "social fabric."

Abbas' security forces also work closely with Israel to keep Hamas in check in the West Bank. Critics accuse Israel of holding Palestinian detainees without charge for extended periods and also of torture.

Mohammed Khatib, a 20-year-old law student and activist with Hamas' student branch in the West Bank, told The Associated Press he was arrested last month and held for 19 days at an intelligence centre in Ramallah. He said he was forced to stand for hours at a time and hung by his handcuffed hands to a door for 15 minutes, a stress position meant to cause pain but leave no sign of injury.

HRW's report also highlights other tactics used to silence Palestinian dissent and punish activists, among them the seizing of phones, leaving investigations and charges open, and coercing detainees to promise to stop any further criticism.

In Gaza, Taghreed Abu Teer, a 47-year-old journalist, told the AP that she was held by Hamas authorities for 11 days and interrogated under "humiliating circumstances" for her activities with the rival Fatah movement.

She said she was kept in a dark cell for days at a time and forced to stand for lengthy periods. Although she was not physically beaten, she said she could hear the screams of men being tortured nearby, and that at one point, a man with a whip threatened to beat her as well. More than a year and a half later, she still cries when she recalls the "unforgettable experience."

"As long as I was in the cell, I was wondering what had caused me to end up here," she said. She spoke at a relative's home so her six children would not hear about the ordeal.

Abu Teer said interrogators threatened to charge her with collaboration with Israel, widely feared as a stigma, and that most of the questions focused on a three-day trip she made to the West Bank, where she met senior Fatah officials and briefed them about the situation in Gaza. She said interrogators accused her of inciting the Palestinian Authority to make financial cuts and other punitive measures against Gaza, a tactic meant to squeeze Hamas.

She denied all the allegations, saying she had only led protests and lobbied for ending the Hamas-Fatah split.

While she was never charged, Hamas officers advised her "to be quiet" and focus on her home and family, "which I considered a veiled threat rather than advice," she added.

Human Rights Watch also said it has encouraged the International Criminal Court to open an investigation into both Israeli and Palestinian conduct in the Palestinian territories. It called on both Palestinian governments to pledge to stop carrying out arbitrary arrests, end torture and hold credible investigations into allegations of misconduct.

In a rare step, the report also called on countries that provide security assistance to withhold aid until concrete steps are taken to end the practices.

Adnan Damiri, spokesman for the Palestinian security forces in the West Bank, denied any allegation of systematic torture and said authorities investigate claims and punish perpetrators.

"These testimonies are not accurate. They are testimonies of political activists who belong to political parties with political agendas, and of course they will put any blame they can on the Palestinian Authority," he told the AP.

In Gaza, Hamas denied arresting critics or opponents on political grounds. Faraj al-Ghoul, a Hamas lawmaker, said the report was "unfair," and that Human Rights Watch was welcome to inspect the group's prisons.