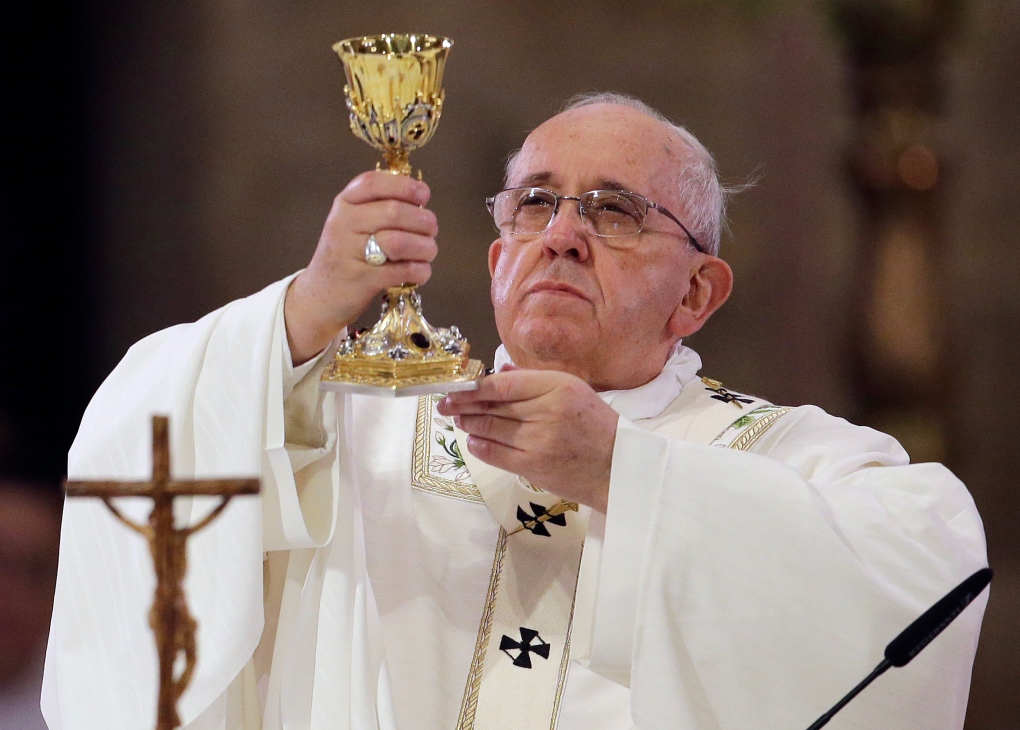 Pope Francis officiates a mass for clergy and religious at the Cathedral Basilica of the Immaculate Conception in Manila, Philippines on Friday, Jan. 16, 2015. (AP Photo/Aaron Favila)

TACLOBAN, Philippines -- Pope Francis travelled to the far eastern Philippines on Saturday to comfort survivors of a devastating 2013 typhoon, braving rains and heavy winds himself and conceding that it was hard to find the right words when surrounded by so much pain.

"So many of you have lost everything," Francis told 150,000 Catholic faithful gathered before Mass under a steady rain in an open field near the airport in Tacloban, the city hit hardest by Typhoon Haiyan. "I don't know what to say to you, but the Lord does know what to say to you. Some of you lost part of your families. All I can do is keep silent. And I walk with you all with my silent heart."

Many in the crowd wept as Francis spoke, overcome by the memory of the Nov. 8, 2013, storm that levelled entire villages with ferocious winds and 7-meter (21-foot) waves and left more than 7,300 people dead or missing. Francis joined them in solidarity, even donning the same yellow rain poncho over his vestments that Mass-goers were given to protect them from the storm.

He drew applause when he told them that he had decided to visit the city of 200,000 in the eastern Leyte province in the days immediately after the storm.

Francis spoke in his native Spanish -- which he reverts to when he wants to speak from the heart. He ditched his prepared homily and instead composed a brief prayer off the cuff that began: "Thank you, Lord, for sharing our pain. Thank you, Lord, for giving us hope..."

As he spoke, the winds whipped the altar cloth and threatened to topple over the candlesticks.

Francis was scheduled to have lunch with survivors of Haiyan and meet with clergy who provided relief to the victims in the storm's aftermath before returning to the capital, Manila. But the Mass was pushed up by 45 minutes, and the rest of his day in Tacloban put into question by approaching Tropical Storm Mekkhala.

The storm, packing winds of 100 kilometres (62 miles) per hour, suspended ferry services to Leyte province, stranding thousands of travellers including some who wanted to see the pope. With the winds strong enough to blow away thatched roofs common in the regions, it is forecast to slam ashore on nearby Samar Island later Saturday.

A police official estimated the crowd at 150,000 before the pope's arrival and said tens of thousands more were lined up outside the airport area. Wearing plastic raincoats, the festive crowd in the city clapped in unison to blaring music welcoming the pope, cheering when his plane landed after the hour-long flight from Manila.

The pope blew kisses, waved and flashed the thumbs up sign to the crowd while riding on a covered popemobile from the airport terminal to the nearby altar.

"I hope the pope can help us forget and help us accept that our loved ones are gone," said Joan Cator, 23, weeping as she spoke. She lost two aunts and four nieces and nephews. "We still cry often and don't talk about what happened."

Villagers hung banners welcoming the pope from the bow of a steel-hulled cargo shop that smashed houses when it was swept in by Haiyan and remains on shore.

"Pope Francis cannot give us houses and jobs, but he can send our prayers to God," said Ernesto Hengzon, 62. "I'm praying for good health and for my children too. I am old and sickly. I'm praying that God will stop these big storms. We cannot take any more of it. We have barely recovered. Many people are still down there."

Francis is visiting the Philippines after stopping in Sri Lanka earlier in the week.

On Sunday, he is due to celebrate the culminating Mass of the visit in Manila's Rizal Park, where as many as 6 million people are expected. St. John Paul II drew a record 5 million people to his final Mass in Manila in 1995, and organizers say they think Francis may top that record.

During his visit, Francis has condemned the corruption that deprives the poor and he issued his strongest defence yet of church teaching opposing artificial contraception. He also made a surprise visit to meet with street children cared for by a Catholic foundation. Photos of the event show a beaming Francis sitting with two boys on his lap, and another with children embracing his belly.

Security has been tighter than it has ever been for this pope. It appeared to let up a bit outside of Manila: Cellphones worked in Tacloban and the police presence appeared to be less intrusive, though Mass-goers were told not to bring umbrellas.