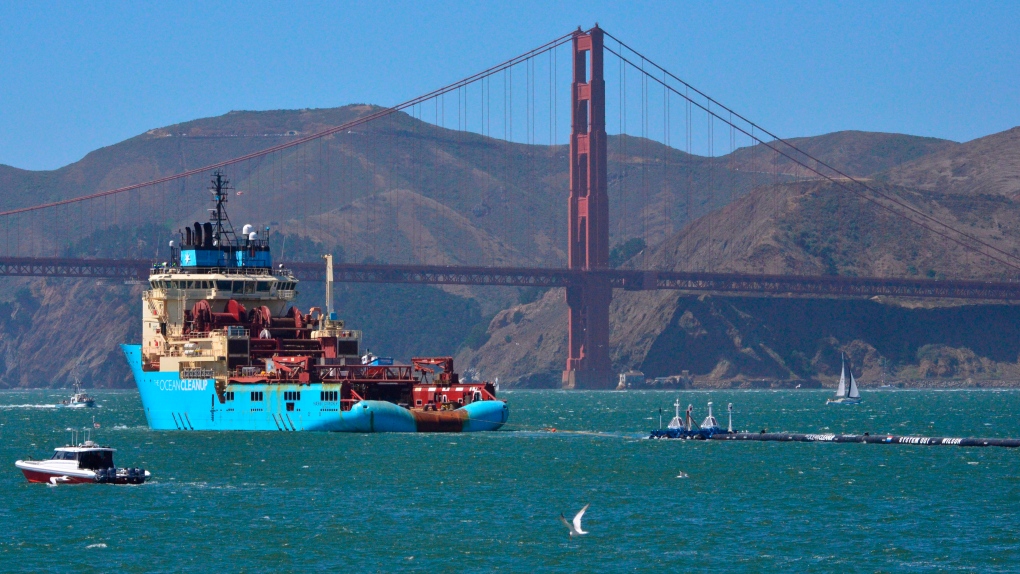 File - In this Sept. 8, 2018 file photo, a ship tows The Ocean Cleanup's first buoyant trash-collecting device toward the Golden Gate Bridge in San Francisco en route to the Pacific Ocean. The trash collection device deployed to corral plastic litter floating between California and Hawaii in an attempt to clean up the world's largest garbage patch is not collecting any trash. (AP Photo/Lorin Eleni Gill, File)

LOS ANGELES -- A floating device sent to corral a swirling island of trash between California and Hawaii has not swept up any plastic waste -- but the young innovator behind the project said Monday that a fix was in the works.

Boyan Slat, 24, who launched the Pacific Ocean cleanup project, said the speed of the solar-powered barrier isn't allowing it to hold on to the plastic it catches.

"Sometimes the system actually moves slightly slower than the plastic, which of course you don't want because then you have a chance of losing the plastic again," Slat said in an interview with The Associated Press.

A crew of engineers will reach the U-shaped boom Tuesday and will work for the next few weeks to widen its span so that it catches more wind and waves to help it go faster, he said.

A ship towed the 2,000-foot-long (600-meter-long) barrier in September from San Francisco to the Great Pacific Garbage Patch -- an island of trash twice the size of Texas. It has been in place since the end of October, Slat said.

The plastic barrier with a tapered 10-foot-deep (3-meter-deep) screen is intended to act like a coastline, trapping some of the 1.8 trillion pieces of plastic that scientists estimate are swirling in the patch while allowing marine life to safely swim beneath it.

Slat said he is not deterred by the setback because engineers expected to make tweaks to the system.

"What we're trying to do has never been done before. So, of course we were expecting to still need to fix a few things before it becomes fully operational," he said of the system created by the Ocean Cleanup, an organization he founded.

Fitted with solar-powered lights, cameras, sensors and satellite antennas, the device intends to communicate its position at all times, allowing a support vessel to fish out the collected plastic every few months and transport it to dry land for recycling.

Slat said he expects shipping containers filled with fishing nets, plastic bottles, laundry baskets and other plastic trash scooped up by the system to be back on land within a year.

"We've given ourselves a year after launch to get this thing working," he said.

Among those skeptical of the Ocean Cleanup is George Leonard, chief scientist of the Ocean Conservancy, a non-profit environmental advocacy group. Leonard says that even if plastic trash can be taken out of the ocean, a lot more is pouring in each year.

Leonard said a solution must include a multipronged approach, including stopping plastic from reaching the ocean and educating people to reduce consumption of single-use plastic containers and bottles.

Slat agreed that preventing more plastic from entering the ocean is part of the solution but said something needs to be done about what's already there.

"This plastic doesn't go away by itself, and to just let hundreds of thousands of tons of plastic be out there to be fragmented into these small and dangerous microplastics to me seems like an unacceptable scenario," he said.