How ISIS became the richest terrorist group in the world

The Islamic State in Iraq and al-Sham (ISIS) has seemingly come out of nowhere to become the wealthiest terrorist organization in the world, surpassing long-active organizations such as al Qaeda, al Shabab and the Taliban.

The well-equipped, well-organized terrorist force has spread across Iraq like wildfire, seizing key cities and much of the country’s oil wells as it surges eastward through the country. ISIS has been a steadily-growing problem in Iraq and Syria since last December, but attacks escalated in early June and culminated last Wednesday when 800 ISIS fighters captured the Iraqi city of Mosul. Since then, ISIS has significantly increased its size, territory and wealth. The International Business Times says ISIS is now worth $2 billion, making it wealthier than small countries such as Tonga, Kiribati, the Marshall Islands or the Falkland Islands.

But how did the year-old al Qaeda offshoot become wealthier than the organization that spawned it?

ISIS received a huge injection of cash when it captured the northern Iraqi city of Mosul, reports say. During the invasion, ISIS reportedly secured more than $466 million and a large quantity of gold bullion when it broke into Mosul’s central bank. Since then, the organization has continued to loot and pillage everything in its path, adding to its already considerable wealth. ISIS has also become increasingly well-armed as it appropriates military weapons and equipment left behind after the United States pulled out of Iraq in 2009.

But ISIS already had considerable funding before it took Mosul. According to U.S. intelligence expert Robert McFadden, ISIS has had a strong financial network in place since its inception in 2013. ISIS is set up to rake in funds through extortion, smuggling and private donations, McFadden said. “It goes back to the earliest days of ISIS," McFadden told CTV’s Kevin Newman Live. “In areas that it controlled, its modus operandi has first been to go after the wealth of those from ethnic and religious minorities.” Wealthy private donors in the region provide ISIS with millions of dollars in additional funds, McFadden said. The organization also extorts “taxes” from the businesses in its territory, and adds to its coffers by selling valuable antiquities seized during its takeovers.

ISIS also draws as much as $1 million per day in profit from each oil well under its control in Syria. And despite its terrorist classification, ISIS has had no trouble selling its oil on the world market, McFadden said. “There’s desperation on both sides,” he said. “Where there’s desperation, there’s also commerce.”

But the Mosul bank robbery effectively bumped ISIS up to a new level altogether, and it’s already flexing its financial muscle. McFadden said images of ISIS troops on television show they are well-equipped, with the latest weapons, uniforms and vehicles. “That takes money,” he said.

McFadden partially attributed ISIS’s lightning-quick sweep across Iraq to its considerable financial resources, which have allowed it to become an effective recruiter in the territories it owns. McFadden said ISIS has developed a reputation of paying well and providing support for fighters’ families, especially when the fighter dies in battle. “It’s allowed ISIS to be a more effective recruiter,” McFadden said.

ISIS has also used its wealth to develop an Internet presence. The organization posts brutal execution videos and photos to its website, maintains a presence on social media and uses a downloadable smartphone app to keep sympathizers informed.

That’s allowed ISIS to fan the flames of sectarian violence between its Sunni forces and Shiite enemies, according to former U.S. Army officer and intelligence expert Michael Pregent. An Internet presence makes it easier for ISIS to recruit, and creates chaos and fear among the Shiite population, he said.

“It shows that ISIS is a viable Sunni insurgency, but it also does what they want in igniting sectarian strife in the Shiite population,” Pregent told Kevin Newman Live.

ISIS formed in April 2013 when al Qaeda in Iraq (AQI) merged with an affiliate organization in Syria. Led by Abu Bakr Al-Baghdadi, an Islamic cleric once detained during the U.S. operation in Iraq, ISIS has spread rapidly across both sides of the Syrian-Iraqi border, and seeks to establish an Islamic state.

ISIS is now waging war on two fronts. To the east, ISIS forces threaten Iraq's capital city of Baghdad, and have swept through nearly half the country. To the west, ISIS has thrust its way into Syrian territory, and now battles Syrian President Bashar al Assad's forces. ISIS-held territory also touches the borders of neighbouring Jordan and Saudi Arabia, with Turkey and Iran not far from its battlefront.

AQI, the organizational predecessor to ISIS, was best-known for suicide attacks, hostage-takings, beheadings and armed attacks, according to Canada's profile of the terrorist organization .AQI's stated goal was to establish a Sunni nation-state governed by Islamic law.

ISIS's stated goals are similar, but its methods have expanded beyond guerilla attacks. ISIS has money, weapons, land and soldiers at its disposal, and its tactics have shifted more toward a military approach.

The latest reports even say ISIS has captured a military base, and is constructing a camp north of Mosul that is designed to house 10,000 soldiers. 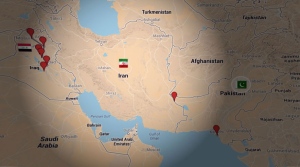 Map tracks militancy in the Middle East and South Asia.