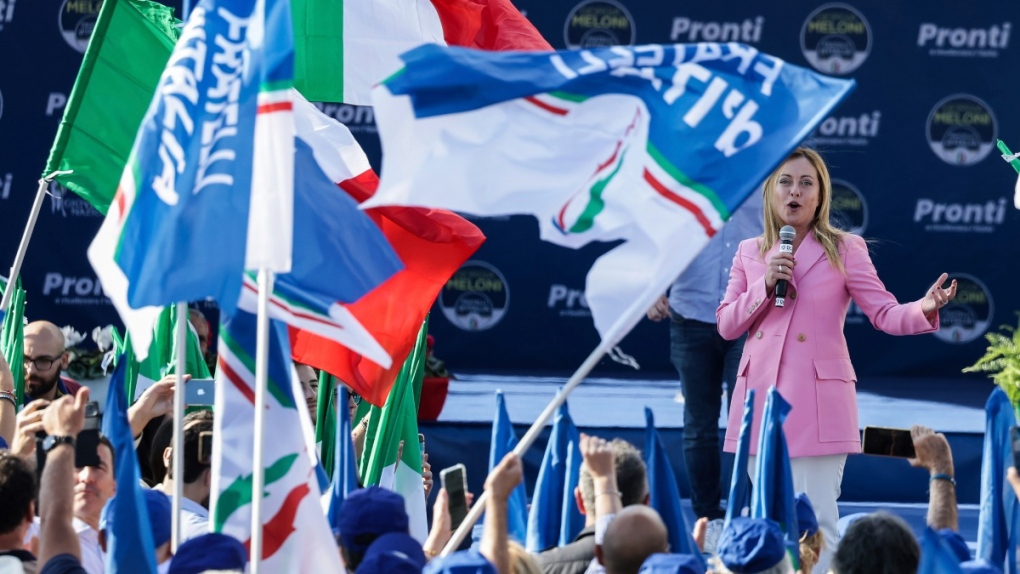 Brothers of Italy's Giorgia Meloni speaks during a party rally in Naples, on Sept. 23, 2022. (Alessandro Garofalo / LaPresse Via AP)
ROME -

The Brothers of Italy party, which won the most votes in Italy's national election, has its roots in the post-Second World War neo-fascist Italian Social Movement.

Keeping the movement's most potent symbol, the tricolour flame, Giorgia Meloni has taken Brothers of Italy from a fringe far-right group to Italy's biggest party.

A century after Benito Mussolini's 1922 March on Rome, which brought the fascist dictator to power, Meloni is poised to lead Italy's first far-right-led government since the Second World War and become its first female premier.

HOW DID POST-FASCISM BEGIN IN ITALY?

The Italian Social Movement, or MSI, was founded in 1946 by Giorgio Almirante, a chief of staff in Mussolini's last government. It drew fascist sympathizers and officials into its ranks following Italy's role in the war, when it was allied with the Nazis and then liberated by the Allies.

Throughout the 1950-1980s, the MSI remained a small right-wing party, polling in the single digits. But historian Paul Ginsborg has noted that its mere survival in the decades after the war "served as a constant reminder of the potent appeal that authoritarianism and nationalism could still exercise among the southern students, urban poor and lower middle classes."

The 1990s brought about a change under Gianfranco Fini, Almirante's protege who nevertheless projected a new moderate face of the Italian right. When Fini ran for Rome mayor in 1993, he won a surprising 46.9% of the vote -- not enough to win but enough to establish him as a player. Within a year, Fini had renamed the MSI the National Alliance.

It was in those years that a young Meloni, who was raised by a single mother in a Rome working-class neighborhood, first joined the MSI's youth branch and then went onto lead the youth branch of Fini's National Alliance.

DOES THAT MEAN MELONI IS NEO-FASCIST?

Fini was dogged by the movement's neo-fascist roots and his own assessment that Mussolini was the 20th century's "greatest statesman." He disavowed that statement, and in 2003 visited the Yad Vashem Holocaust memorial in Israel. There, he described Italy's racial laws, which restricted Jews' rights, as part of the "absolute evil" of the war.

Meloni, too, had praised Mussolini in her youth but visited Yad Vashem in 2009 when she was a minister in Silvio Berlusconi's last government. Writing in her 2021 memoir "I Am Giorgia," she described the experience as evidence of how "a genocide happens step by step, a little at a time."

During the campaign, Meloni was forced to confront the issue head-on, after the Democrats warned that she represented a danger to democracy.

"The Italian right has handed fascism over to history for decades now, unambiguously condemning the suppression of democracy and the ignominious anti-Jewish laws," she said in a campaign video.

HOW DID BROTHERS OF ITALY EMERGE?

Meloni, who proudly touts her roots as an MSI militant, has said the first spark of creating Brothers of Italy came after Berlusconi resigned as premier in 2011, forced out by a financial crisis over Italy's soaring debt and his own legal problems.

Meloni refused to support Mario Monti, who was tapped by Italy's president to try to form a technocratic government to reassure international financial markets. Meloni couldn't stand what she believed was external pressure from European capitals to dictate internal Italian politics.

Meloni co-founded the party in 2012, naming it after the first words of the Italian national anthem. "A new party for an old tradition," Meloni wrote.

Brothers of Italy would only take in single-digit results in its first decade. The European Parliament election in 2019 brought Brothers of Italy 6.4% -- a figure that Meloni says "changed everything."

As the leader of the only party in opposition during Mario Draghi's 2021-2022 national unity government, her popularity soared, with Sunday's election netting it 26%.

BUT WHAT ABOUT THE PARTY'S LOGO?

The party has at the center of its logo the red, white and green flame of the original MSI that remained when the movement became the National Alliance. While less obvious than the bundle of sticks, or fasces, that was the prominent symbol of Mussolini's National Fascist Party, the tricolor flame is nevertheless a powerful image that ties the current party to its past.

"Political logos are a form of branding, no different than those aimed at consumers," Rutgers University professor T. Corey Brennan said.

He recalled that when Almirante made his final MSI campaign pitch to voters in the 1948 election at Rome's Spanish Steps, he put the party's flame symbol on top of the obelisk and illuminated it with floodlights.

"You can make whatever you want out of a flame, but everybody understood that Almirante was making a deeply emotional appeal to keep the spirit of fascism alive," he said.

HOW DO ITALIANS FEEL ABOUT IT?

In general, the party's neo-fascist roots appear to be of more concern abroad than at home. Some historians explain that by noting a certain historical amnesia here and Italians' general comfort living with the relics of fascism as evidence that Italy never really repudiated the Fascist Party and Mussolini in the same way Germany repudiated National Socialism and Hitler.

While Germany went through a long and painful process reckoning with its past, Italians have in many ways simply turned a willful blindness to their own.

Historian David Kertzer of Brown University notes that there are 67 institutes for the study of the Resistance to Fascism in Italy, and virtually no center for the study of Italian Fascism.

In addition, Mussolini-era architecture and symbols are everywhere: from the EUR neighborhood in southern Rome to the Olympic training center on the Tiber River, with its obelisk still bearing Mussolini's name.

The Italian Constitution bars the reconstitution of the Fascist party, but far-right groups still display the fascist salute and there continues to be an acceptance of fascist symbols in daily life, said Brennan, the Rutgers professor.

"You don't have to look very hard for signs," Brennan said in a phone interview. "Fully a quarter of all manhole covers in Rome still have the fasces on them."

DOES THAT MEAN ITALIANS SUPPORT FASCISM?

If history is any guide, one constant in recent Italian political elections is a vote for change, with a desire for something new seemingly overtaking traditional political ideology in big pendulum shifts, said Nathalie Tocci, director of the Rome-based Institute of International Affairs.

Tocci said the Brothers of Italy's popularity in 2022 was evidence of this "violent" swing from left to right that is more about Italian dissatisfaction than any surge in neo-fascist or far-right sentiment.

Meloni still speaks reverently about the MSI and Almirante, even if her rhetoric can change to suit her audience.

This summer, speaking in perfect Spanish, she thundered at a rally of Spain's hard-right Vox party: "Yes to the natural family. No to the LGBT lobby. Yes to sexual identity. No to gender ideology."

Back home on the campaign trail, she projected a much more moderate tone and appealed for unity in her victory speech Monday.

"Italy chose us," she said. "We will not betray it, as we never have."

The head of Ukraine's state-run nuclear energy firm said on Sunday there were signs that Russian forces might be preparing to leave the vast Zaporizhzhia nuclear power plant which they seized in March soon after their invasion.

A peer reviewed study assessing over 800 elderly women has found that flavonoids -- a naturally occurring substance found in beverages such as black and green tea -- could lead to notable health benefits.

Edmonton transit drivers are sharing images of what they are seeing on buses and the LRT on a sometimes daily basis in the hopes it will push the city to hire more transit peace officers.

The federal government has unveiled its long-awaited Indo-Pacific Strategy, which details a decade of plans for investment and partnerships in the region, and signals a tougher stance on China going forward.

Federal Health Minister Jean-Yves Duclos says the previously announced one million units of imported kids' pain relievers are starting to arrive on pharmacy shelves, while an additional 500,000 units have been ordered and are expected over the next few weeks.