'Hotel Rwanda' hero was tricked onto plane, into arrest 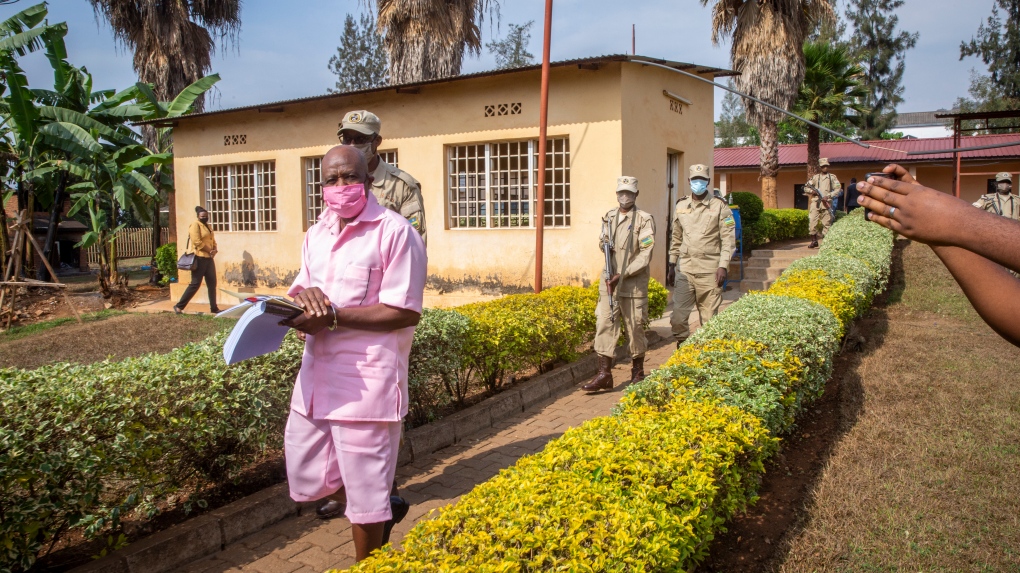 Paul Rusesabagina, whose story inspired the film "Hotel Rwanda", wears a pink prison uniform as he arrives for a bail hearing at a court in the capital Kigali, Rwanda Friday, Sept. 25, 2020. (AP Photo/Muhizi Olivier)

KIGALI, RWANDA -- A key piece of the mystery around the arrest of the man who inspired the film "Hotel Rwanda" became clear on Friday when a pastor told a Rwandan court he worked with someone from the Rwanda Investigation Bureau to trick him onto a private plane from Dubai.

The pastor, Constantin Niyomwungere, alleged that Paul Rusesabagina, who now faces terror-related charges, had acknowledged that rebels backed by his opposition platform had killed Rwandans.

"Myself, the pilot and cabin crew knew we were coming to (the Rwandan capital) Kigali. The only person who didn't know where we were headed was Paul," Niyomwungere said.

The 66-year-old Rusesabagina, once praised for saving hundreds of ethnic Tutsis from Rwanda's 1994 genocide while a hotel manager, now faces nine charges including the formation of an irregular armed group; membership in a terrorist group; financing terrorism; and murder, abduction and armed robbery as an act of terrorism.

If convicted, he could face more than 20 years in prison.

The case of Rusesabagina, a Belgian citizen and U.S. resident and outspoken critic of longtime Rwandan President Paul Kagame, has drawn international concern. He disappeared in August during a visit to Dubai and was paraded in handcuffs days later in Rwanda.

His family asserts that the charges against him are politically motivated. Rusesabagina asserts that he was kidnapped. Rwanda's president had hinted that he had been tricked into boarding a flight to Rwanda, a country he left in 1996.

In court on Friday, Rusesabagina denounced the pastor Niyomwungere, whom he has said "betrayed" him.

Niyomwungere said an unnamed person connected him and Rusesabagina in 2017 in Brussels and they later become friends.

He said that in one conversation, Rusesabagina admitted that rebels backed by his opposition platform were responsible for an attack inside Rwanda. The pastor alleged that Rusesabagina showed no remorse, which pained him.

Niyomwungere said last year he started working on a plan with the Rwanda Investigation Bureau to capture Rusesabagina. "I prayed to God to give me courage and arrest this man. I prayed for a month," he said.

Opportunity came when Rusesabagina said he planned to travel to Burundi, which neighbours Rwanda. Niyomwungere said he alerted the Rwanda Investigation Bureau contact.

Rwanda's government has alleged that Rusesabagina was going to Burundi to co-ordinate with armed groups based there and in neighbouring Congo.

On Friday, Rusesabagina said all his rights have been taken away and his international lawyers have been refused. Last month, Rwanda's attorney general in a video accidentally sent to al-Jazeera said authorities had intercepted messages between Rusesabagina and his legal team.

"How can you say my rights have been respected when I spent the first three days of captivity at an unknown location, blindfolded, tied legs and hands?" he asked.

When the trial resumes on March 10, the court will rule on whether Rusesabagina was kidnapped and is in Rwanda illegally. The court earlier rejected his argument that a Rwandan court cannot try him because he is no longer a citizen.

His family says Rusesabagina has no chance at a fair trial because of his outspoken criticism of Kagame and human rights abuses. They also fear he might die from poor health behind bars.