Hong Kong protests expand to oppose China, with no end near 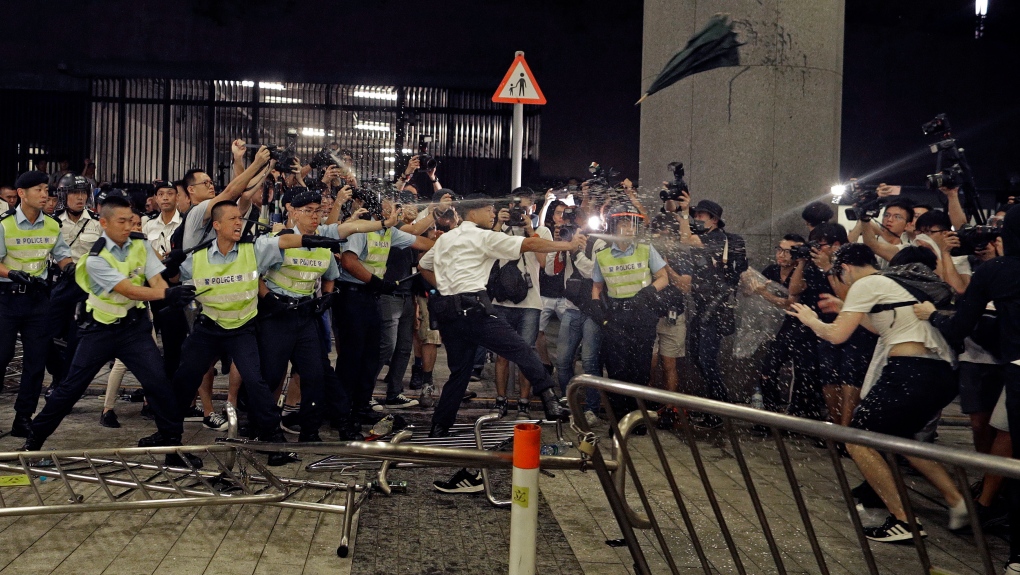 In this Monday, June 10, 2019, file photo, police officers use pepper spray against protesters in a rally against the proposed amendments to the extradition law at the Legislative Council in Hong Kong. (AP Photo/Vincent Yu, File)

After more than a month of demonstrations in Hong Kong's sweltering heat, memories of the burning sensation are a constant reminder of what protesters call an excessive use of force by police. Each time he felt the now-familiar sting, Wong, 18, was more determined to not back down.

"Every time we come out and stand up, problems continue to arise afterward," Wong said, referring to the protesters' dissatisfaction with responses from law enforcement and Hong Kong leader Carrie Lam. "Trust in the whole Hong Kong government is bankrupt."

What began as a protest against an extradition bill has ballooned into a fundamental challenge to the way Hong Kong is governed -- and the role of the Chinese government in the city's affairs. "Hong Kong is not China" has become a refrain of the movement in what is a Chinese territory, but with its own laws and a separate legal system under a "one country, two systems" framework.

Hundreds of thousands of people took to the streets in Hong Kong in three marches last month to oppose the extradition legislation, which would have allowed suspects to be sent to mainland China, where critics fear they would face opaque charges and unfair trials.

In recent weeks, the demonstrations have also included two smaller protests led by nativist-leaning groups against an influx of mainland Chinese into the city of 7.4 million people. All of it traces back to an underlying mistrust of the Hong Kong and Beijing authorities, which fuels calls for a more responsive government that protesters believe democracy would bring.

When Hong Kong was returned to China from British colonial rule in 1997, its residents were promised certain freedoms not afforded to mainland Chinese. Opponents of the extradition bill argued that a hallmark of the "one country, two systems" framework -- Hong Kong's independent judicial system -- would be compromised under the proposed legislation.

Lam initially maintained that the bill would move forward, but has since declared them indefinitely suspended and "dead." The protests, however, have continued unabated, as demonstrators call for Lam's resignation, the legislation's formal withdrawal and an investigation into police tactics. They also demand that protesters not be punished -- as the leaders of the pro-democracy "Umbrella Movement" demonstrations in 2014 were.

Across these issues, protesters have increasingly held up signs expressing a broader wish: a yearning for greater democracy.

Slogans such as "Free Hong Kong" and "Democracy Now" have become more widely used, said Antony Dapiran, a Hong Kong-based lawyer and author of a book about the city's recent protest history who has been attending the protests since they began.

"People are fundamentally saying that they don't trust the mainland Communist government," he said. "There's an underlying anxiety and fear in Hong Kong of what they're going to do."

Pro-democracy sentiment has become more pronounced in recent years as Hong Kong residents increasingly feel that Beijing, under the leadership of President Xi Jinping, is encroaching on their promised freedoms.

A principal demand has been for "universal suffrage," which means allowing Hong Kong citizens to vote directly for their chief executive and Legislative Council. The current chief executive, Lam, was chosen in 2017 by a 1,200-person committee dominated by pro-Beijing elites.

Several events have fueled anxieties about eroding boundaries between Hong Kong and the mainland. Five Hong Kong booksellers disappeared and ended up in Chinese custody, and the 2014 protest leaders were sent to prison. Meanwhile, China has built a high-speed rail link between the mainland and Hong Kong and plans to include both in a "Greater Bay Area," seen as attempts by Beijing to meld Hong Kong with the mainland.

"The furor over the extradition bill has since metamorphosed into a generalized movement uniting Hong Kong people of all ages and from all walks of life to express their frustrations and disappointments about an array of issues related to China," said Phil Chan, a senior fellow at the Institute for Security and Development Policy in Stockholm.

Mainland Chinese traders, as well as middle-aged mainland women who sing and dance loudly in a public park, have also been targets of Hong Kong protesters.

In what has become a recurring pattern, a demonstration Sunday in the northern district of Sha Tin was peaceful for most of the day, but scuffles broke out when police started clearing streets after nightfall. Some protesters retreated into a shopping complex where they and police hit each other with clubs and umbrellas. Claudia Mo, a pro-democracy lawmaker, described the clashes as an "eye-for-an-eye retaliatory" approach.

Wong was in the area Sunday, trying to help fellow protesters find safety. He said they are now gearing up for a large protest this Sunday at the government complex in the Admiralty district.

"There is a reason that all of these citizens are standing up," said Wong, a recent high school graduate who plans to study design at university in the fall. "We still have to work, we still have to study, we would like to have normal holidays."

Instead, he has spent his summer break administering first aid to protesters and helping to document the events.

"I just can't imagine how this will end," he said.