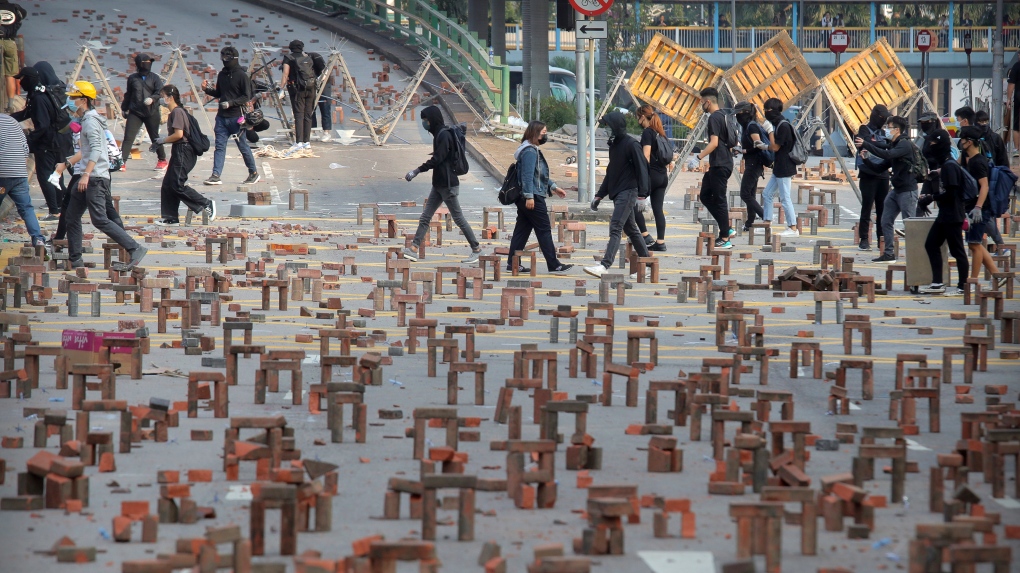 In this Nov. 14, 2019, photo, protesters walk past barricades of bricks on a road near the Hong Kong Polytechnic University in Hong Kong. (AP Photo/Kin Cheung, File)

HONG KONG -- Many of the protesters who had barricaded themselves in a Hong Kong university this week began to leave Friday after temporarily clearing a road they had blocked and demanding that the government commit to going ahead with local elections on Nov. 24.

It wasn't immediately clear why the protesters at the Chinese University of Hong Kong were leaving, or where they might go next. Some remained but in much smaller numbers.

The university's president, Rocky Tuan, urged everyone to leave, saying the situation was out of control and that the university may need to seek government help.

In the morning, the protesters cleared one lane in each direction on Tolo Highway and gave the government 24 hours to agree to their demand. After the deadline expired, they blocked the road again.

"In the face of the inconvenience we have caused to the elderly and other young people, we have decided to take the initiative to show our goodwill," one masked protester said before the lanes were cleared. "We would like to re-iterate that our target is the government."

Workers sent in to clean up remaining debris and set up traffic cones were heckled by protesters, who pointed bows and arrows at them, government officials said, but the two lanes were re-opened around midday.

The district council elections are seen as a barometer of public sentiment in the semi-autonomous Chinese territory, which has been riven by anti-government protests for more than five months. Pro-democracy activists say the government may use the escalating violence as a reason to cancel the elections.

Patrick Nip, the secretary for constitutional affairs, said the government hasn't changed its decision to hold the vote.

"We are all worried as to whether the election can be held in a safe manner," he said at a news conference. "If we want to hold an orderly election it takes the whole society to chip in so we can lower the risk."

The police, meanwhile, said they would investigate the death of a 70-year-old man who was hit in the head by a brick as a murder case.

The man, who was using his phone to film a skirmish between protesters and others trying to clear a street earlier this week, died Thursday night. The Hong Kong government expressed outrage over what it called "the malicious acts of the rioters."

In London, the Chinese Embassy said that Hong Kong Justice Secretary Teresa Cheng was pushed to the ground by activists who were following her and shouting at her, injuring her hand. It wasn't clear if she was pushed or fell in the confrontation.

"We express strong indignation and unequivocally condemn the activists," the embassy said in a statement. "Now, they are taking such violence abroad and into the U.K."

Hong Kong leader Carrie Lam called the attack "barbaric" and said it violated the principles of a civilized society.

Asked about the incident, Metropolitan Police in London said they are investigating an allegation of assault of a woman who was taken to the hospital with an arm injury.

Students and other protesters have taken over major campuses in Hong Kong this week, building barricades and stockpiling gasoline bombs and other weapons.

In Taiwan, civic and religious groups protested outside Hong Kong's representative office, calling for an end to what they said were abuses against anti-government protesters in the territory.

Cheng Ying-er, a pastor in the Presbyterian church that has long been active on pro-democracy issues, said the situation in Hong Kong was a matter of "religious values and human rights."

"Taiwan stands with you all," he told those gathered outside the Hong Kong Economic, Trade and Cultural Office in Taipei.

Taiwanese lawyers have formed a pro-bono committee to help any Hong Kong residents who want to seek refuge in Taiwan, said Lin Chun-hung, a member of the group.

"Our lawyers will provide them with assistance so that they can stay here," he said.

Many in Taiwan have come out strongly against the crackdown on the Hong Kong protest movement.

Taiwan underwent a largely peaceful transition to full democracy in recent decades and has rejected China's proposal of unification with the mainland under the same "one country, two systems" formula implemented in Hong Kong.