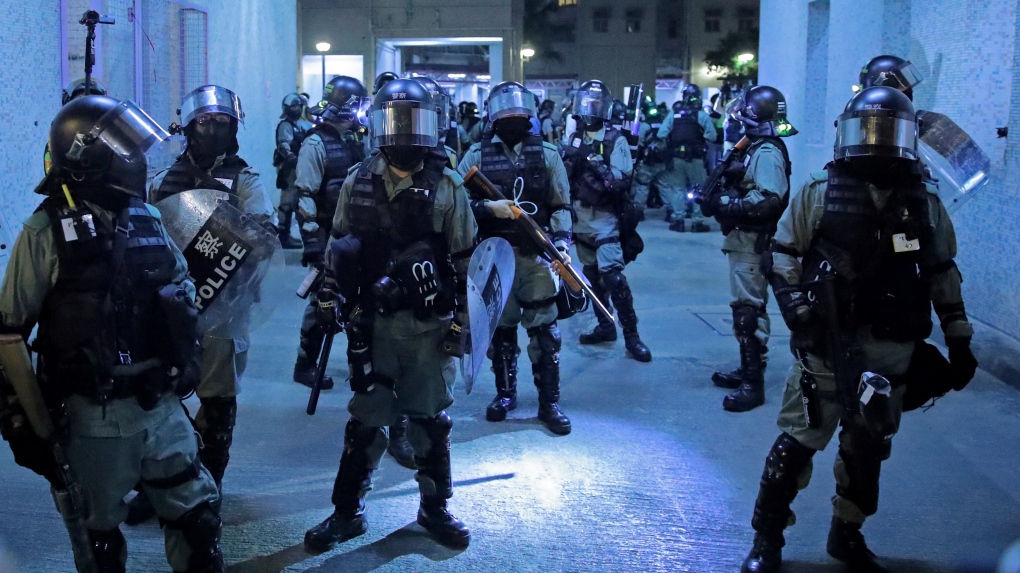 HONG KONG -- Police in Hong Kong said Saturday that they have arrested and charged six pro-democracy lawmakers, a move that could escalate public fury a day after the death of a university student linked to months of anti-government protests in the semi-autonomous Chinese territory.

Protesters vented their anger over Chow Tsz-Lok's death and vowed not to give up their resistance at a police-approved prayer rally Saturday night, with frequent chants of "Hong Kong people, revenge" and "Free Hong Kong."

The 22-year-old died Friday, succumbing to injuries four days after falling from a parking garage when police fired tear gas during clashes with protesters. Although the circumstances of his death are unclear, many blame police who have been accused of heavy-handed tactics since the unrest began in June, including widespread use of tear gas and pepper spray.

Police said they arrested six lawmakers and charged them Saturday with obstructing the local assembly during a raucous May 11 meeting over a now-shelved China extradition bill that sparked the five months of protests calling for democratic reforms. All were freed on bail.

A seventh lawmaker received a summons but failed to turn up at a police station to face arrest, a police spokesman said.

Pro-democracy lawmakers slammed the government clampdown as a calculated move after Chow's death to provoke more violence as an excuse to postpone or cancel Nov. 24 district elections -- polls viewed as a barometer of public sentiment amid the unrest.

"We'll say no to their plans," lawmaker Tanya Chan told a news conference. "It is a de facto referendum for all Hong Kong voters to cast their vote and say no to police brutality and say no to our unjust system."

She said the district elections will also send a crucial message to Beijing, accused by protesters of interfering in Hong Kong's freedoms and rights promised when the former British colony returned to Chinese control in 1997.

Hong Kong's constitutional and mainland affairs secretary, Patrick Nip, said police made the arrests based on their investigation and that they had nothing to do with the upcoming elections.

On Saturday night, thousands gathered at a Christian memorial service for Chow, singing hymns and laying white flowers and paper cranes at a makeshift stage in a downtown park.

It wasn't clear what Chow was doing at the garage early Monday as mobs clashed with police in the streets below. Police have repeatedly denied that officers pushed him down and had delayed emergency services that delayed treatment.

A friend of Chow told a citizens' press conference earlier Saturday that he had joined every protest since June.

"We, friends, were doing what we could on the streets. We were frustrated with the tyranny of this government," said the friend, who wore a mask and didn't identify himself.

At the evening prayer rally, various speakers, including hard-line protesters, took to the stage to call for justice for Chow and vowed never to surrender.

"Hong Kong people can be struck down but never defeated," said a masked protester. Another protester urged citizens to show their anger by going out early to vote in the district council elections.

Prominent activist Joshua Wong, who has been barred from running in this month's polls, said the city can emerge from the chaos if protesters unite and fight on despite the tough road ahead.

Shortly after the event ended, police issued warnings to dozens of protesters gathered outside the office of Hong Kong's embattled leader adjacent to the park. Some protesters pointed laser beams at the Chinese garrison building nearby and heckled police, but they later dispersed.

There have been only a few fatalities during the unrest, including some reported deaths by suicide and a man who fell to his death while hanging pro-democracy banners on a building.

More than 3,300 people have been arrested since the start of the protest movement, which has expanded to include calls for direct elections for the city's leaders and other demands.