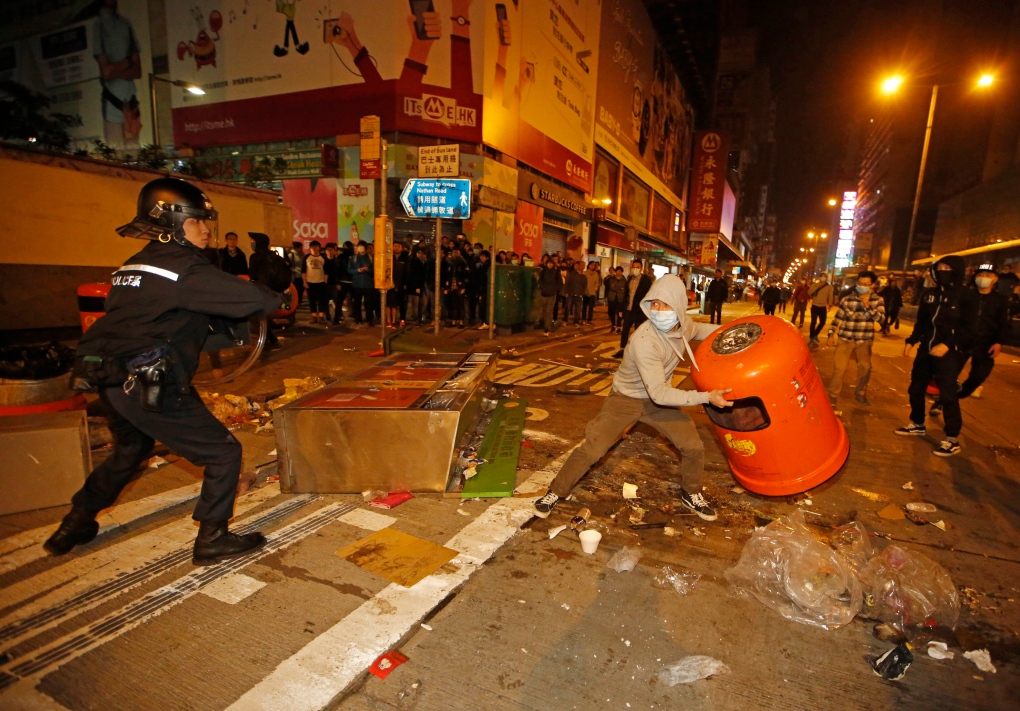 A rioter tries to throw a litter bin at police on a street in Mongkok district of Hong Kong, Tuesday, Feb. 9, 2016. (AP / Kin Cheung)

Hong Kong's Lunar New Year celebration descended into chaotic scenes as protesters and police, who fired warning shots into the air, clashed over a street market selling fishballs and other local holiday delicacies, with dozens injured and arrested.

The violence is the worst in Hong Kong since pro-democracy protests rocked the city in 2014, leaving a growing trust gap between the public and authorities.

Activists angered over authorities' attempts to crack down on the food hawkers in a crowded Kowloon neighbourhood held running battles with police into the early morning hours of Tuesday.

Protesters pelted officers with paving stones, glass bottles and other pieces of debris. Some threw garbage cans, plastic safety barriers and wood from shipping pallets. They also set fires on the street.

Hong Kong's leader, Chief Executive Leung Chun-ying, told reporters a mob had attacked police officers and journalists, and said the perpetrators would be prosecuted. More than 80 officers and four reporters were hurt, he said.

Police cars and public property were damaged, fires started and bricks and other objects thrown at police officers, including those already injured and lying on the ground, Leung said.

"I believe the public can see for themselves from TV news reports the seriousness of the situation. The (Hong Kong) government strongly condemns such violent acts. The police will apprehend the mobs and bring them to justice," Leung said.

Officials said they were investigating whether the violence had been organized in advance.

At one point, a protester tried to tackle a traffic police officer from behind before both sides rush in to the melee in the middle of a busy street, according to footage shown by local news channel Cable TV. Moments later, another officer appeared to fire two warning shots into the air.

Hong Kong police said in a statement that the protesters had ignored their warnings to get off the street and shoved officers, who responded with batons and pepper spray.

Acting District Commander Yau Siu-kei said 23 men and one woman were arrested on suspicion of assaulting and obstructing officers, resisting arrest and public disorder. The arrested were as young as 17 and as old as 70.

The unrest started when authorities tried to prevent unlicensed street food sellers from operating on Monday night in Mong Kok, a working-class district of the city. The hawkers have become a local tradition during the Lunar New Year holiday but this year authorities tried to remove them.

The hawkers were backed by activists who objected to the crackdown over concerns that Hong Kong's local culture is disappearing as Beijing tightens its hold on the semiautonomous city.

The latest scuffles underscore how tensions remain unresolved more than a year after the end of pro-democracy protests that gripped the city. Mong Kok, a popular and densely populated shopping and entertainment district, was one of the neighbourhoods where activists occupied streets for about 11 weeks in late 2014, capturing world headlines with their demands for greater electoral freedom.