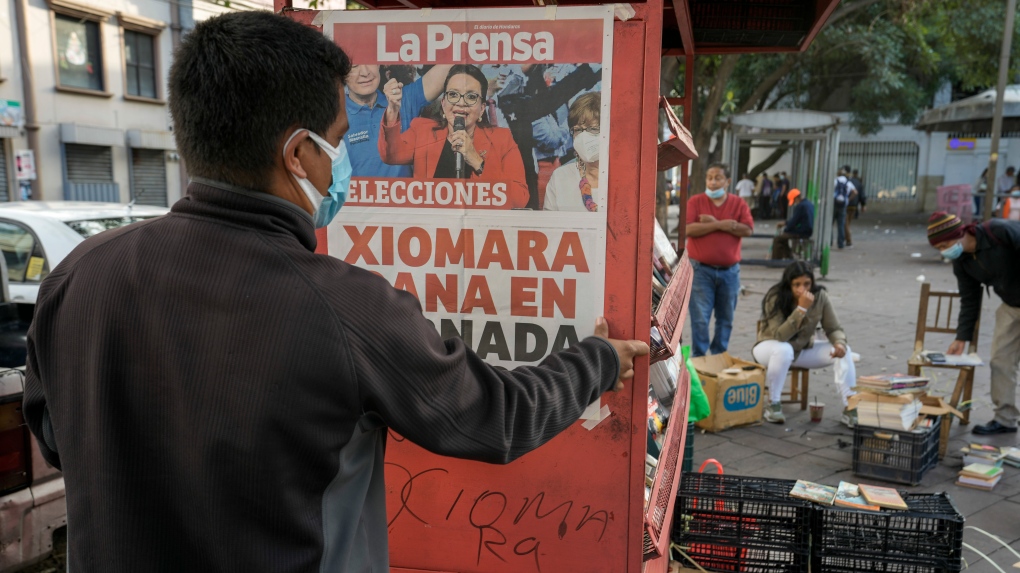 A man sets up his newspaper stand by hanging a poster with a photo of Free Party presidential candidate Xiomara Castro and the day's headline of her expected victory, after general elections in Tegucigalpa, Honduras, Monday, Nov. 29, 2021. (AP Photo/Moises Castillo)
TEGUCIGALPA -

Calling Castro "president elect," National Party contender Nasry Asfura said he had visited his opponent at her family home to offer his congratulations for winning Sunday's vote, in a move that will end his group's 12-year hold on power.

"Now I want to say publicly, I congratulate her on her victory," Asfura said in a video broadcast on local television alongside photos of the two rivals hugging and smiling.

Castro has piled up a preliminary lead of almost 20 percentage points over Asfura, but the result had been held in suspense by a sluggish vote count at the electoral council.

"We congratulate Hondurans for the high voter turnout, peaceful participation, and active civil society engagement that marked this election, signaling an enduring commitment to the democratic process," Blinken said.

Although the electoral council has not published preliminary vote totals for congressional races, early results point to a possible majority for Castro's Libre party and its main allies.

National Party chief David Chavez said earlier that his party would assume the role of "constructive opposition" and was ready to work with the incoming government.

The concession brings to an end a turbulent period under the National Party, which has been dogged by scandals and corruption accusations, especially during the two terms of outgoing President Juan Orlando Hernandez.

Hernandez is deeply unpopular and has been implicated in a drug trafficking case in a U.S. federal court. He denies wrongdoing, but could face an indictment when he leaves office.

Castro's victory will see the left return to power after a 2-year hiatus that followed the ousting of her husband, former President Manuel Zelaya, in a coup in 2009.

Castro faces big challenges in Honduras, where joblessness, crime, corruption and the threat of transnational drug gangs have helped spur record migration to the United States.

She managed a strong showing in Sunday's election despite findings by the European Union vote observer mission that the National Party had used state backing to boost its campaign.

The smooth transmission of early election results had aided transparency and confidence, the EU mission said. But it criticized pre-election political violence and "abuse of state resources," such as a rise in handing out of welfare vouchers.

Castro's team is already preparing for government. Hugo Noe, head of the campaign's policy platform, told Reuters Castro will seek to negotiate a new debt deal with the International Monetary Fund when she takes office in January.