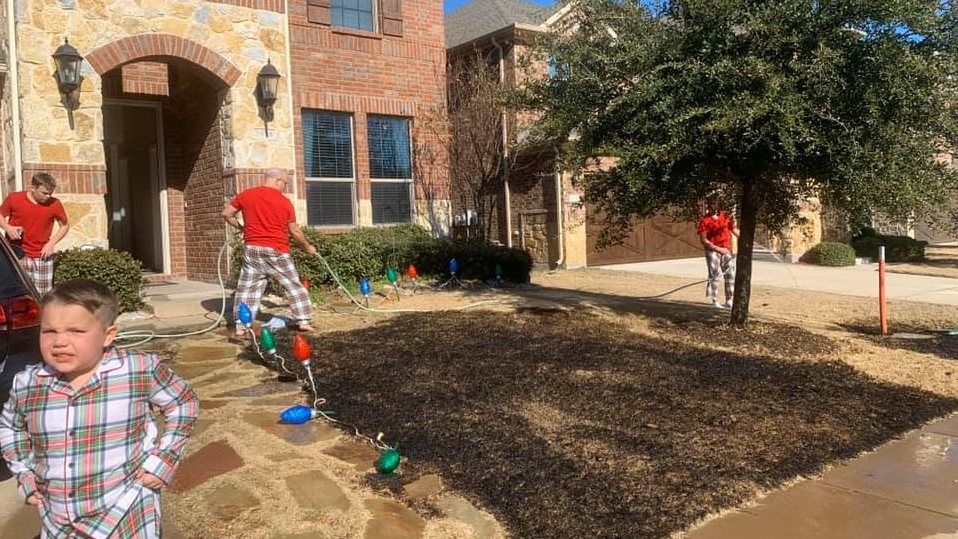 This photo posted to Nissa-Lynn Parson's Facebook shows her family cleaning up after one of her sons accidentally lit the lawn on fire on Christmas Day. (Nissa-Lynn Parson via Storyful)

TORONTO -- A magnifying glass causing a rapidly-spreading fire may sound like hijinks straight out of a comic book, but for one family in McKinney, Texas, it was simply Christmas morning.

In a video posted to Facebook, the camera pans across a wide, blackened section of lawn, where Christmas lights are wilting under sprinkler spray.

Then, a second voice: “Cayden, this is all your fault.”

Not long before Nissa-Lynn Parson filmed this video, her 12-year-old son had excitedly unwrapped a magnifying glass as a Christmas present.

According to a Facebook post by Parson, Cayden ran outside with his two brothers to test out his gift. They wanted to see if they could light paper on fire in the driveway, Parson wrote.

At first, it was all going to plan, as the boys successfully burnt a few holes into the paper. But they’d forgotten that paper was not the only flammable thing in their line of fire.

“Everything was under control,” Parson said in the post, “until the boys came running into the house telling us that a corner of the lawn was on fire and the Christmas lights were melting!”

The rest of the family rushed outside “to see the entire front lawn turning black,” she said.

They sprang into action, grabbing buckets, turning on the sprinklers and fetching a blanket to smother the fire before it could spread to any other homes.

“What a sight to see,” Parson said. “A bunch of people running around (like) crazy trying to put a front lawn fire out while wearing matching Christmas jammies!”

A photo of the scene posted by Parson shows family members cleaning up the mess while dressed in plaid pajama pants and red T-shirts. Another photo shows billowing smoke from an in-progress fire and one family member poised with a bucket.

Luckily, they were successful in containing the fire to their own lawn and putting it out, leaving a rectangle of charred grass bigger than a car.

Parson's advice to avoid a Christmas catastrophe like hers?

“Never buy a magnifying glass for your son!” she joked.