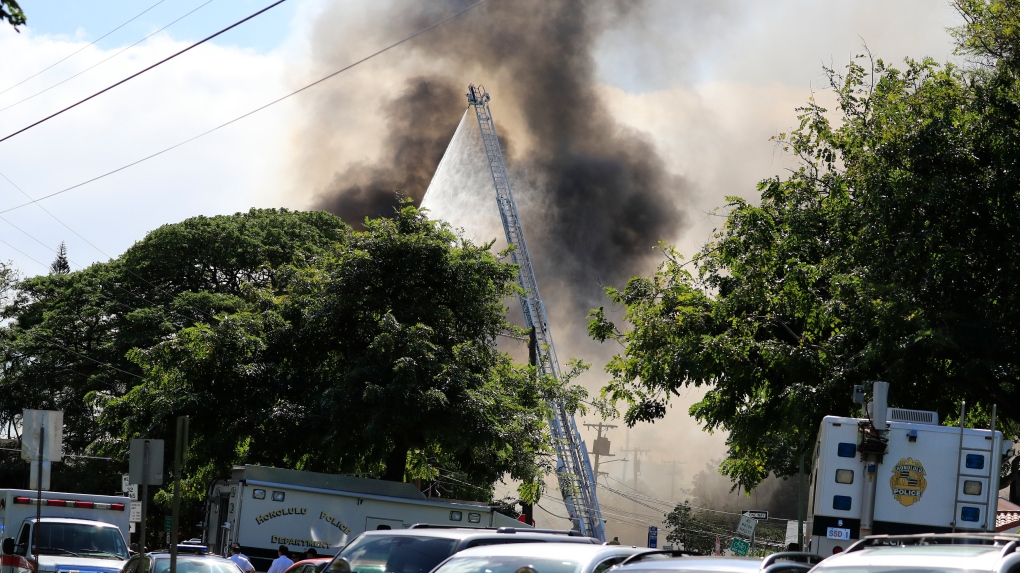 HONOLULU -- A Hawaii handyman with a history of run-ins with police and neighbours faced eviction when he stabbed his landlord and killed two officers before the house he and two women were believed to be inside burned, authorities and neighbours said.

Police suspect Hanel, who was in his 60s, and two women who have not been identified were inside the house when it caught fire. They were presumed dead and Ballard said it could take days for authorities to recover remains and process evidence.

The fire just a few blocks from oceanfront high-rise buildings spread, destroying seven homes and leaving others with fire or smoke damage. As it raged, the sound of dozens of apparent gunshots rang out.

Ballard said no other officers were injured but that authorities were investigating whether ammunition, incendiary devices or explosives contributed to the intensity of the blaze. The apparent gunfire prompted authorities to initially prevent firefighters from approaching.

The homeowner, Lois Cain, had recently sought the eviction of Hanel, who lived in the home for free in exchange for his work, according to court records and a lawyer who has represented him.

A neighbour told The Associated Press she saw Cain being put into an ambulance suffering from knife wounds. Her condition was not disclosed.

The normally peaceful neighbourhood is at the far end of famed Waikiki Beach, between the Honolulu Zoo and the Diamond Head State Monument, a volcanic crater popular with tourists and hikers.

Ian Felix, a Honolulu resident and combat veteran with medical training, told the AP he was walking by the home when he saw a woman lying on the ground with blood coming from her leg.

Felix applied pressure and put a tourniquet on the woman's leg until the first police officer arrived. Two more officers arrived moments later; Felix said he then heard two gunshots and that he and the officer carried the injured woman into a neighbour's garage across the street.

Neighbours described Hanel as mentally disturbed and Ballard said he did not have any gun permits.

Hawaii has some of the toughest gun laws in the U.S. Residents can't buy firearms without permits approved by local police, who check databases to make sure applicants have not been convicted of felonies or misdemeanour crimes including assault or domestic violence.

People are also denied permits if they have been acquitted of crimes because of mental problems or have been diagnosed with significant mental, behavioural or emotional disorders.

Attorney Jonathan Burge has represented Hanel since 2015 in various disputes with neighbours, including temporary restraining orders that three obtained against him. Hanel, a native of the Czech Republic who used Czech interpreters in court, faced a hearing next week on a charge of misusing 911 services, Burge said Sunday.

Burge said he never knew Hanel to be violent, but that "he's kind of a quirky guy and had problems." Hanel believed the government was watching him and tapping his phone, Burge said.

Cain was supportive of him in his disputes with neighbours, Burge said. But she wanted him to move out so she could move into the home and their relationship also soured because Hanel's dog had died and Cain wouldn't let him get a new one.

"I know that she was trying to have him evicted because she was moving back to Hawaii and had to live there herself. So that's kind of the extent of what was going on, but I heard she had just filed for the eviction on Friday," Burge told KHON-TV. "Maybe she was serving it to him and it pushed him over the edge."

In the complaint for Hanel's eviction, Cain said Hanel did not have a rental agreement and that despite repeated demands, he refused to vacate the premises.