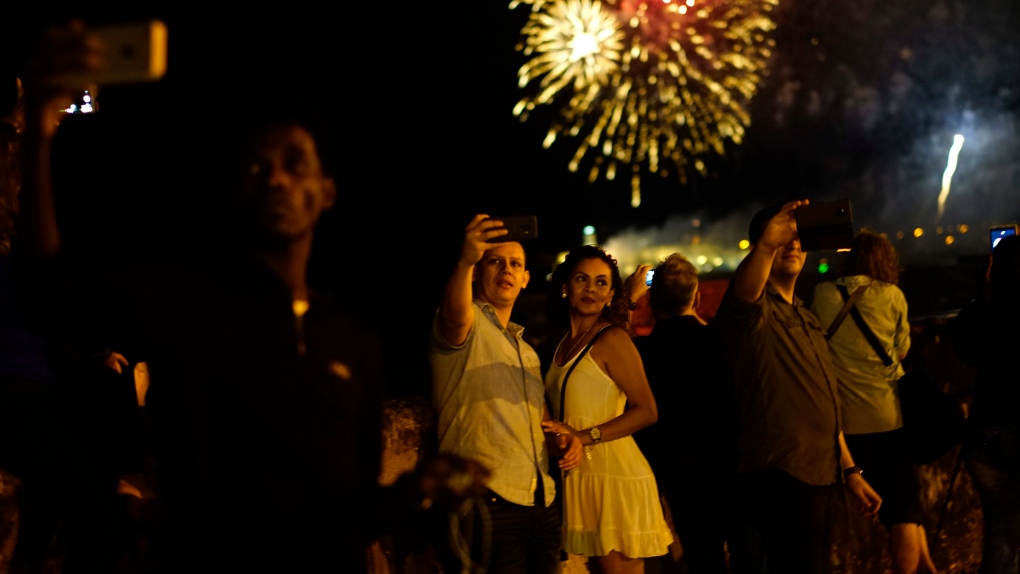 People take selfies at the malecon watching the fireworks as part of the celebration of the 500 years of the city in Havana, Cuba, Friday, Nov. 15, 2019. (AP Photo/Ramon Espinosa)

HAVANA -- Hundreds of people in Cuba's capital stood in line to kiss, touch or walk around a towering silk floss tree Saturday in a nod to tradition as they celebrate Havana's 500th anniversary this weekend.

The event comes as Cuba deals with an ailing economy and increasingly tense relations with the U.S., concerns that were briefly cast aside as residents prepared for a gala event Saturday night featuring fireworks, music and international dignitaries.

Many in the crowd shared their wishes with the tree, including requests for health or financial wellbeing. Some left money while others wore white as dictated by Afro-Cuban Santeria, the island's predominant religion.

Irene Dominguez, a chemical engineer, said she had faith in the tree and asked that it watch over her sick relatives and her wellbeing, as well as that of the entire city.

"I was very excited, I yelled and was near tears," she said, adding that she felt a great energy.

"Havana, a city of science, dance, cinema, literature, sporting events and an example of resistance in the face of neoliberalism, is also the city of dignity, the bastion of resistance against the unjust (U.S.) blockade," Diaz-Canel said in a meeting behind closed doors, according to official media.