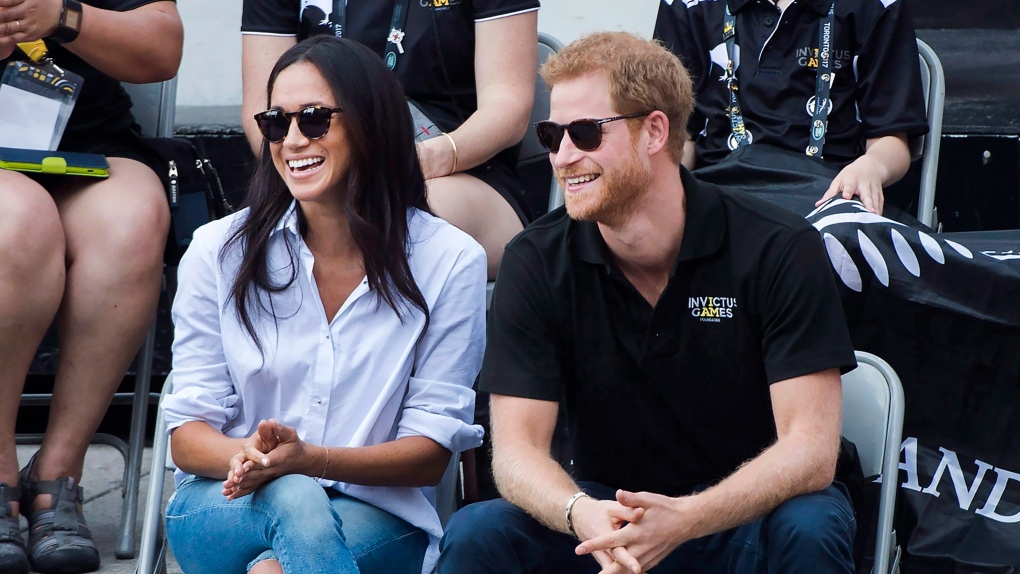 In this 2017 file photo, Harry and then-girlfriend Meghan laugh while watching the wheelchair tennis competition during the Invictus Games in Toronto on Monday, Sept. 25. It was the couple's first public appearance together. (THE CANADIAN PRESS/Nathan Denette)

TORONTO -- The story behind the naming of Harry and Meghan’s rescue dog has romantic origins for the royal couple. For Romanians the meaning is a little more crass.

According to an excerpt published by People magazine, of the new book “Finding Freedom: Harry and Meghan and the Making of a Modern Royal Family,” the Duke and Duchess of Sussex, who got the dog in 2018, named the black Labrador “Pula” after the national currency of Botswana, where Harry reportedly took Meghan when they were dating. The trip is “where it all began,” according to tabloid sources, who told the Sun in 2017 that the couple decided to marry while at a luxury safari campsite there.

In Setswana, an official language of the country, the word also means “rain,” a scarce, sacred resource in the African nation.

But as some Romanian internet users pointed out this week, it means something completely different in their language. Pula, in Romanian, is vulgar slang for the male sex organ.

“Surely someone in their group would have [G]oogled pula to ensure it wasn’t Romanian for penis?” wrote one Twitter user. “Quite a shock to see it in print…!!!” wrote another.

Some internet users were already taken aback by the choice to name the dog after money, one Twitter user calling it “truly fitting.”

“Always raining money with Sussex’s! Near and dear to their heart and lifestyle,” the tweet reads.

The royal couple have faced criticism in the past for attempting to trademark the “Sussex Royal” name and pursue a financially independent life separate from the family.