Alexandra Jaffe and Will Weissert 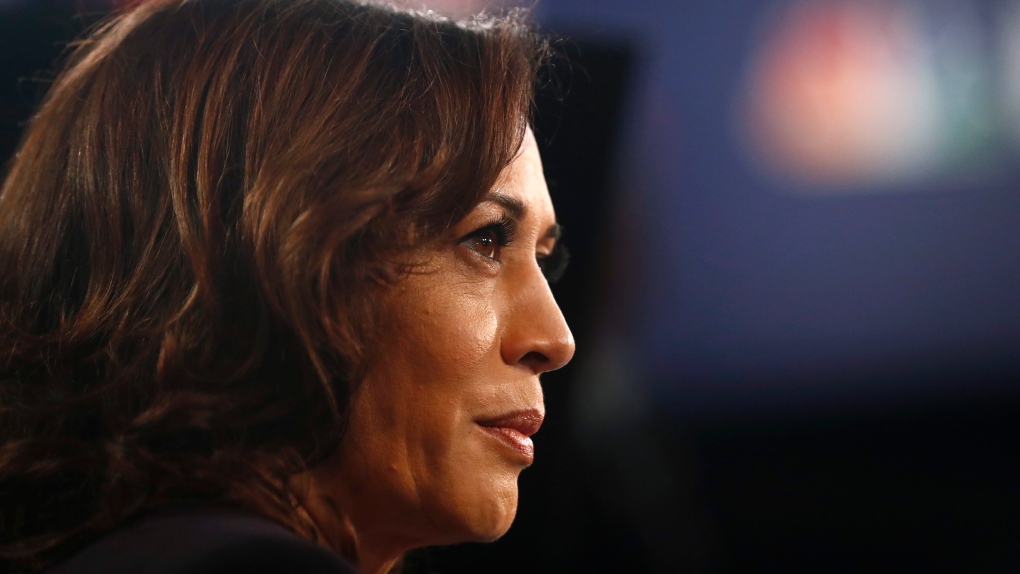 Sen. Kamala Harris, D-Calif., listens to questions in the spin room after the Democratic primary debate hosted by NBC News at the Adrienne Arsht Center for the Performing Art, Thursday, June 27, 2019, in Miami. (AP Photo/Brynn Anderson)

WILMINGTON, DEL. -- In her first two days as Joe Biden's running mate, Kamala Harris has fired off the campaign's sharpest criticism of President Donald Trump's shortcomings. She has vouched for Biden's character on race and more. And the enthusiasm surrounding her historic candidacy has brought in a record $48 million in 48 hours.

The campaign hopes it is just the beginning.

With less than three months before the election, Harris is rapidly embracing her new role. Democratic operatives and Harris allies believe she'll energize what has been a relatively quiet campaign that has often preferred to keep the attention on the turbulence of Trump's White House. She's already making a vigorous case for Trump's defeat, allowing Biden to focus more on his own policy prescriptions and less on direct attacks.

"We always look for surrogates and validators that help close the deal and can speak to voters who needed another reason to say, `Yes, I'm gonna support Joe Biden,"' said Donna Brazile, a former Democratic National Committee chair who also ran Al Gore's 2000 campaign. "She fills in the gap."

Harris was known during the Democratic presidential primary for wearing Converse sneakers and dancing with staff and supporters in unscripted moments. Biden allies expect her to deliver enthusiasm among some Democrats who oppose Trump but aren't yet energized to vote for a candidate they feel may be out of touch with their concerns.

Harris' "ability to connect" is part of what California Rep. Barbara Lee, who served as one of her campaign chairs, believes will help her deliver the campaign message to voters who may be otherwise tuned out.

"She loves to dance. She loves to cook. She's a person who does normal things that everybody does. They can relate to her," Lee said.

Still, Harris, the first Black woman selected for a national ticket, has faced her own criticism from young voters and progressives in the past, namely over her record on police misconduct as a district attorney and later California's attorney general. Critics say she opposed key criminal justice reform measures, including police body cameras statewide, and didn't address a number of wrongful convictions on her watch.

But during her time in Congress she's embraced greater reforms to law enforcement, particularly in recent months in the nationwide reckoning over racism sparked by the police killing of George Floyd. She has been a leading Democratic voice on the issue.

Some progressives still point to Biden's past support for the 1994 crime bill as reason to doubt his commitment to criminal justice reform. And Harris herself was a critic of Biden's record on race, notably assailing him during a primary debate for previously opposing federally mandated busing. But Harris signalled Wednesday that she'll offer a strong defence of Biden's record on race.

During her first appearance with the former vice-president, she said Biden "takes his place in the ongoing story of America's march towards equality and justice" as the only person "who's served alongside the first Black president and has chosen the first Black woman as his running mate."

Biden campaign officials see her as a strong messenger against Trump, pointing to both her vigorous criticism of the Republican president during her primary campaign, when her pledge to "prosecute the case" against Trump won her support, as well as her sharp comments Wednesday. She said Trump "cares more about himself than the people who elected him" and accused him of "making every challenge we face even more difficult to solve."

Brian Brokaw, who ran Harris' campaign for attorney general in 2010, said her questioning of Trump officials during Senate Judiciary Committee hearings hints at the case she'll make against him on the campaign trail and during the vice-presidential debate with Mike Pence.

"No one should forget that she had cut her teeth in the courtroom," he said. "Anybody who has been on the receiving end of the Kamala Harris cross-examination, whether it's a witness on the stand or Jeff Sessions or Bill Barr knows that if you're in her crosshairs, it's an uncomfortable place to be."

Biden's allies believe a main Harris advantage is demonstrated by the Republicans' struggle to settle on a line of attack against her. In the short time since she was announced, Trump has called her everything from "extraordinarily nasty" to "a madwoman," from "phony" to "radical left." On Thursday he said he had "heard" rumours that she is ineligible to run for national office because her parents are immigrants. She was born in Oakland, California, and there is no doubt she is eligible.

Harris is already delivering for the campaign in a tangible way: with a record-breaking fundraising haul.

While fundraising is traditionally one of the running mate's top priorities, a number of donors said her presence would be particularly helpful for Democrats because of her connections in California and beyond. Through her nearly two decades in California politics, Harris built a network of deep-pocketed donors in Hollywood and the state's legal circles.

Andrew Byrnes, a California donor who supported Harris, then moved to Biden in the presidential primary, said he got about 50 messages from donors wanting to get involved after Biden selected her.

Michel Kraut, a Los Angeles lawyer and major Harris contributor, said he's already had donors asking him about putting together events in the area.

"It allows Kamala's nationwide fundraising machine to get reinvigorated," said Kraut, who has already been raising money for Biden.

"There's this new energy that the person we wanted to be president and now is on the presidential ticket has created. It's not just, "I'll raise money,' but, `I'll be dedicated to do this."'