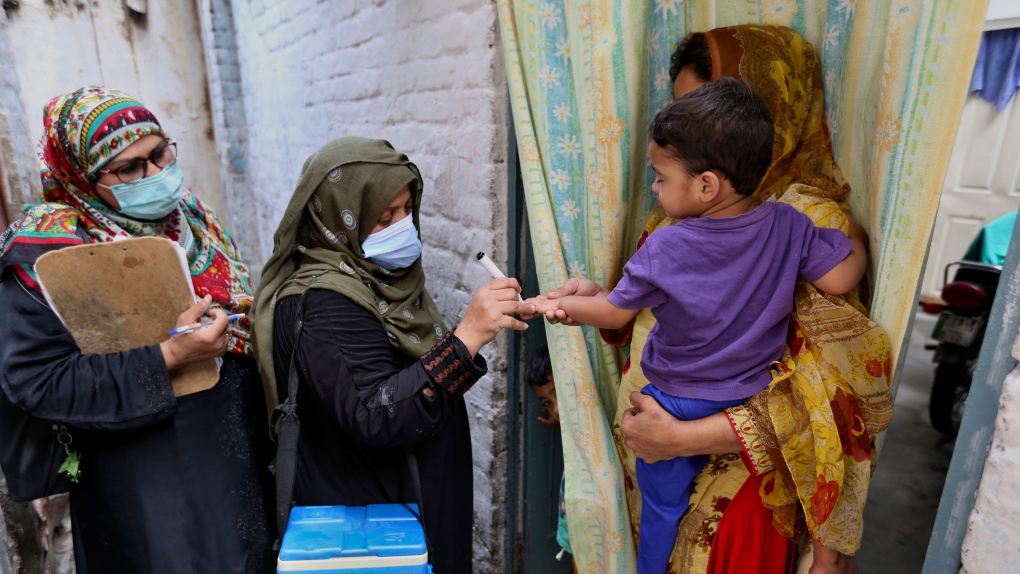 A health worker marks the finger of a child after administrating a polio vaccine in a neighbourhood of Lahore, Pakistan, Monday, Aug. 2, 2021.

Senior officer Khalid Suhail said the attack happened in the village of Dhal Behzadi about 75 kilometres south of Peshawar, the capital of Khyber Pakhtunkhwa province.

Members of the vaccination team were unhurt, he said. No one immediately claimed responsibility for the assault.

The attack came on the third day of a five-day polio vaccination drive across the province. It's part of a nationwide program to eradicate the crippling disease by the end of 2021. So far this year, no new polio cases have been reported in Pakistan.

Pakistan and neighbouring Afghanistan are the only two remaining countries in the world where polio is endemic, after Nigeria last year was declared free of the virus.

Aimal Khan, provincial spokesman for the anti-polio program, said the goal of the five-day drive is to vaccinate 6.24 million children up to age 5 across the province. Nearly 30,340 teams of trained workers were going home to home to administer the vaccines, he said.

Khan said after Sunday's attack in the district of Kohat, security for the vaccination teams has been enhanced. Some 40,000 police and paramilitary troops are assigned to provide security during the vaccination campaign.

Pakistani militants often target polio teams and police assigned to protect them claiming the vaccination campaigns are a Western conspiracy to sterilize children.