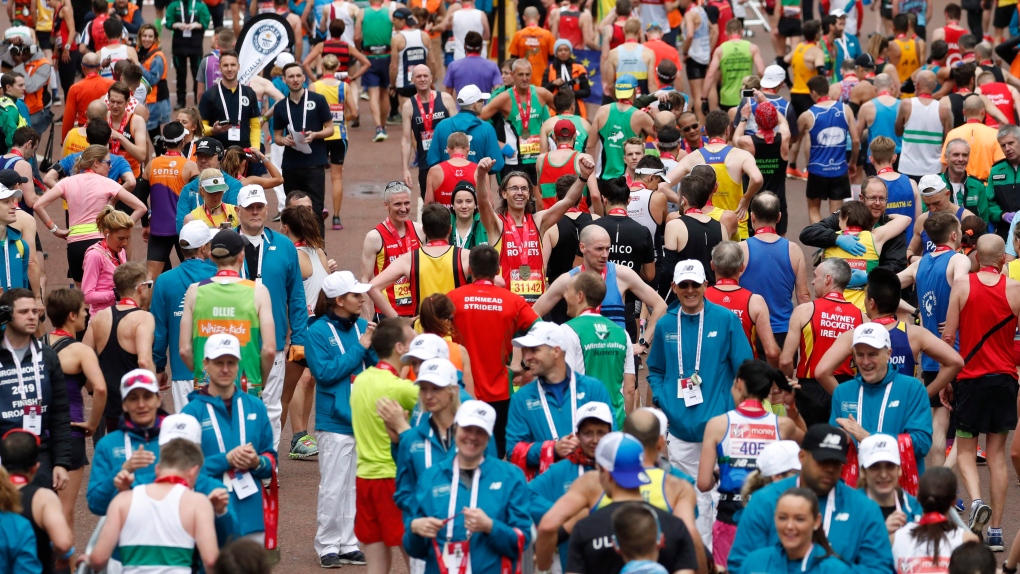 A competitor in the 39th London Marathon, centre, turns round and raises his arms in triumph after he competed the marathon and shares an moment with his friends as they look back down the course in London, Sunday, April 28, 2019. (AP Photo/Alastair Grant)

Guinness World Records has reversed its decision to strip away the record title of a marathon runner who had been awarded “fastest marathon wearing a nurse's uniform.”

The title was initially denied because she was wearing medical scrubs with trousers instead of a skirt when she ran the race.  In a statement, Guinness World Records now “unreservedly apologize and accept full responsibility” for their initial reversal.

They said they are pleased to award U.K. nurse Jessica Anderson the title. She ran the recent London Marathon in a time of 3.08:22 -- half a minute faster than the existing marathon record for a woman in a nurse's uniform.

Upon hearing about the initial denial, Anderson told Runner's World magazine she felt the rules were outdated and reinforced "old gender stereotypes."

Many people online agreed and were in an uproar, posting pictures of themselves in medical scrubs and writing that the rules were sexist. Many also tweeted that Guinness should reverse its initial decision.

And Guinness World Records appears to have taken the criticism to heart.

“Our guidelines for the fastest marathon wearing a nurse’s uniform were outdated, incorrect and reflected a stereotype we do not in any way wish to perpetuate,” senior vice president Guinness World Records Samantha Fay said in a statement.

"I want to take this opportunity to reassure everybody concerned that Guinness World Records is absolutely committed to ensuring we uphold the highest standards of equality and inclusiveness,” she added.

Before Tuesday’s latest reversal, Guinness's rules for a nurse's uniform had been described as a blue or white dress, apron with a traditional cap.

"Moreover, we have taken the decision to no longer allow fancy dress clothing for this category and will introduce guidelines which reflect the clothes worn by nurses in the UK and around the world,” Fay said.

The decision was not a surprise as Guinness World Records had said on Saturday, "it is quite clear that this record title is long overdue a review, which we will conduct as a priority in the coming days."

The Tuesday statement said that this review is also the first of 200 other marathon title reviews that would be conducted in the coming months.

They said any outdated uniforms for similar titles they discover “will be either amended to reflect modern standards, or deactivated.”