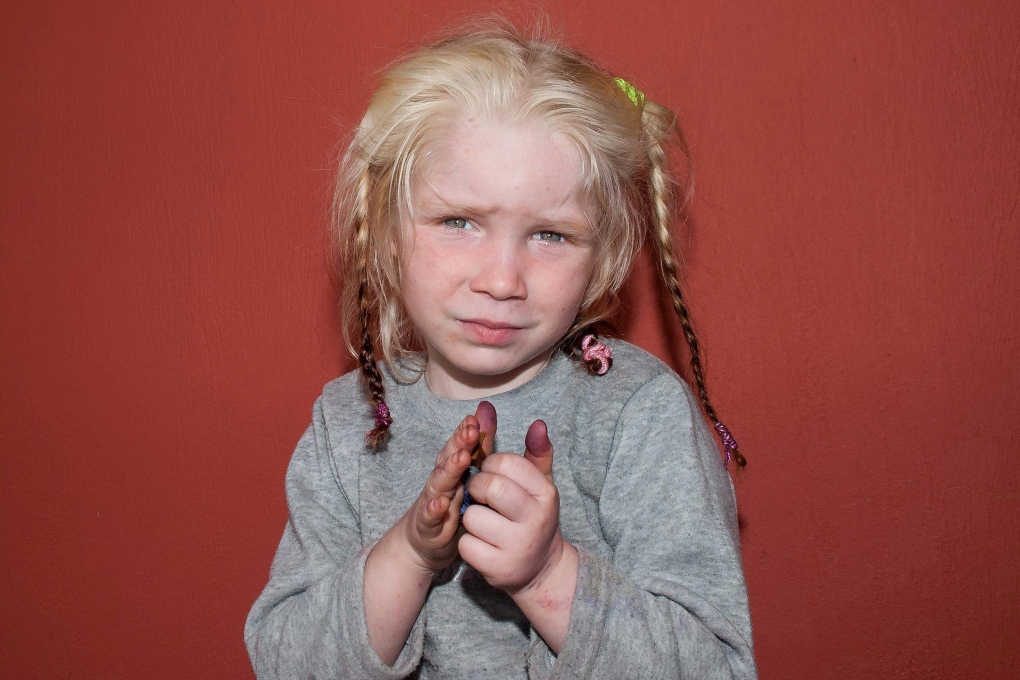 Greek authorities requested international assistance to identify a four-year-old girl found living in a Roma camp with a couple who were not her birth parents, Friday, Oct. 18, 2013. (Greek Police)

FARSALA, Greece -- Romas stroll about prefabricated homes in their camp, many of them smiling and seemingly carefree. But there is worry and resentment here.

Their community is at the centre of a child abduction case, with a Roma couple accused of abducting a blonde, blue-eyed girl who is thought to be about 4 years old.

The Roma, a poor people in a country devastated by an economic crisis, try to make a living in the camp on the outskirts of the central town of Farsala by selling fruits, carpets, blankets, baskets and shoes at local markets. They say they are already considered by some to be social outcasts, thieves and beggars.

Now, they fear they will be stigmatized as child traffickers. The president of the local Roma community, Babis Dimitriou, hopes there is no backlash against the 2,000 Roma living in the community.

The case "doesn't reflect on all of us," he told The Associated Press on Sunday.

A 40-year-old woman and 39-year-old man have been charged with abducting a minor after police raided the camp Wednesday looking for drugs and weapons. A suspicious prosecutor who accompanied police on the raid thought it was odd that the girl looked nothing like her parents.

DNA tests proved the couple isn't the girl's biological parents. The man and woman will appear in a court Monday. Police have launched an international appeal to find the biological parents of the girl, who is known as Maria in the camp. She is being cared for in Athens by a charity.

Many Roma are wary of media attention and resentful of what they say is neglect by the state. The only thing authorities have provided, they say, is the prefab houses that replaced the tents they were living in eight years ago.

What the local Roma seem keen to convey is that their community is not involved in either child abductions or trafficking.

"We know these cases exist, but they involve Bulgarians, not Greeks like us. There are no transactions involving children here," Dimitriou insists, adding that the 40-year-old woman, who had registered Maria as her own child, "cared for her even better than for her own children."

Another resident of the community, who lives with the Roma but is not one of them, takes their side.

"There is no buying and selling of children here ... The other Roma are not to blame. These are family people. After this event, the police have been searching everyone. Isn't this racist?" 42-year-old Christos Lioupis said.

The couple accused of abducting the girl had used multiple identities to register 14 children in three different cities, of whom only four have been identified, Halatsis said. An examination of the birthdates of the children shows that the woman, at one point, was giving birth every four months, he said. Overall, the couple received 2,500 euros ($3,420) per month in state assistance.

"We are dealing with a very unusual case. Usually, parents report a child's disappearance and we look for the children. In this case, we have the child and we are looking for its (her) parents," Halatsis said. "So far, we have had calls from France, Poland, even the United States. We are looking at each case, to see if the ages match, and if there are similar features. DNA testing will follow."

"At this point, we can't say there is a child trafficking network involved, but we are looking at this possibility," the police chief said. He added that there have been documented cases of Greek childless couples buying children of Bulgarian Roma for up to 15,000 euros (about $20,500).

Making public the names of the couple that harboured Maria would give a boost to the search for her parents, Halatsis said. But that is up to the judicial authorities.