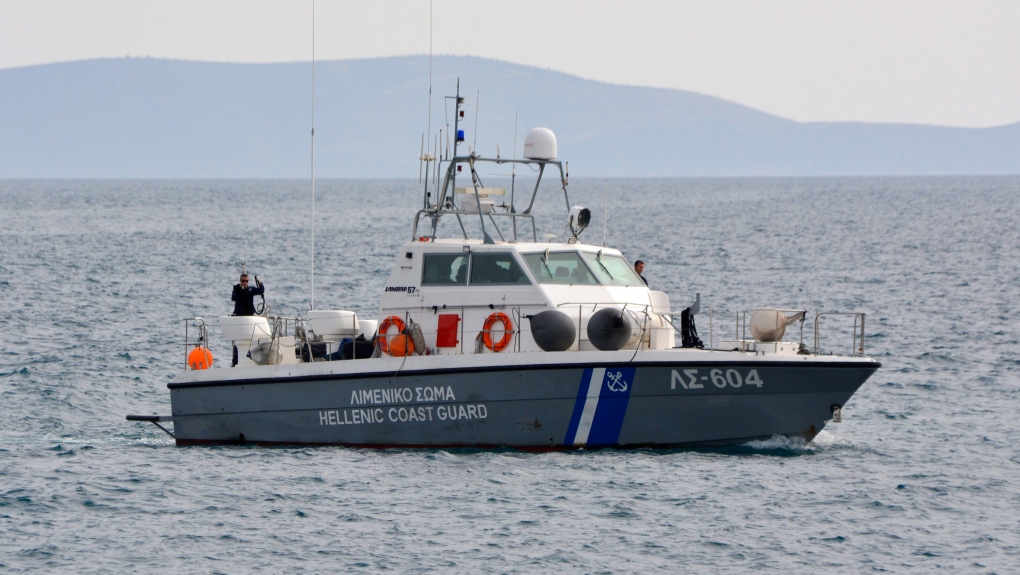 In this file photo, a coast guard vessel arrives at the port of Pythagorio on the eastern Greek island of Samos, Saturday, March 17, 2018. (AP Photo/Michael Svarnias)
ATHENS, Greece -

Greek authorities conducted a major search and rescue operation Wednesday for dozens of people believed missing at sea east of the island of Karpathos after a boat reportedly carrying up to 80 migrants towards Italy sank during the night.

The coast guard said 29 men were rescued 33 nautical miles (38 miles, 61 kilometres) off Karpathos, a southeastern island between Rhodes and Crete.

Two were plucked from the waves by an air force helicopter and flown to Karpathos, while the other 27 were picked up by a passing tanker ship and taken to the island of Kos.

The survivors were from Afghanistan, Iraq and Iran, and told authorities there had been 60 to 80 people on the vessel, the coast guard said. No further survivors had been located by late Wednesday, although the search was continuing.

Those rescued said the boat had departed the Antalya area on the southern Turkish coast for Italy when it ran into trouble during the night.

"The search is continuing with unreduced intensity," said Shipping and Island Policy Minister Giannis Plakiotakis, under whose jurisdiction the coast guard lies. "The protection of human life is our daily concern and absolute priority," he said, adding that more than 6,000 people had been rescued in 145 search and rescue operations over the past two years.

The most common sea route for asylum-seekers from the Middle East, Asia and Africa has been from Turkey to the nearby Greek islands. But with Greek authorities increasing patrols in the Aegean, and facing persistent reports of summarily deporting new arrivals to Turkey without allowing them to apply for asylum, many are now attempting the much longer, and more dangerous, route directly to Italy. Greek authorities deny they carry out illegal summary deportations of asylum-seekers.

In a separate incident in northern Greece, a key entry point for people crossing illegally from Turkey by land, a police officer was charged Wednesday with attempted manslaughter with intent after two members of a group of migrants fleeing arrest were shot and injured.

The 52-year-old suspect was arrested late Tuesday following the shooting near the town of Kavala, and is in custody pending an initial court appearance Thursday.

Police said a patrol car came upon about 30 migrants getting out of a van on a highway. When they tried to run away, the patrol car gave chase, with the officer in the passenger seat saying he fired in the air for intimidation.

Nine of the van's passengers -- seven Syrian men, one Syrian woman and an Egyptian man -- were arrested. Two of the Syrian men, aged 20 and 26, suffered bullet wounds, one in the shoulder and the other in the forearm.

They were taken to hospital, where one was treated and released and the other remained for surgery, police said.