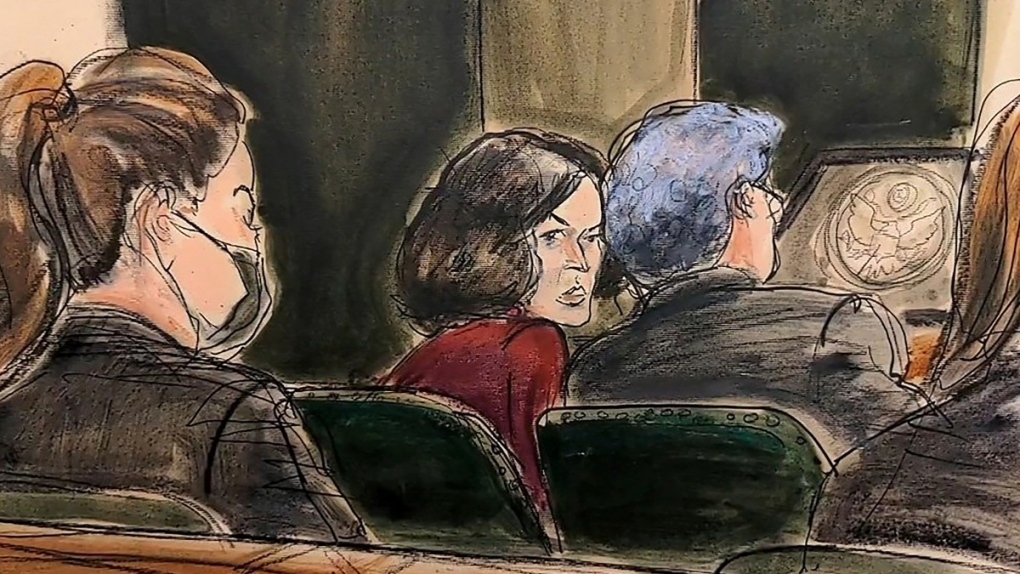 NEW YORK -- A man testified at Ghislaine Maxwell's criminal sex abuse trial on Wednesday that he drove teen girls to the Florida mansion of the late financier Jeffrey Epstein and saw them leave with hundred dollar bills.

The man, who identified himself as Shawn, testified that he had begun dating a woman named Carolyn in Florida when he was 17 and she was 14.

Carolyn, now in her mid-30s, testified on Tuesday that she had sexual encounters with Epstein at his Palm Beach, Fla., home beginning when she was 14 in 2002.

The British socialite, 59, has pleaded not guilty to eight counts of sex trafficking and other charges for her alleged role in recruiting and grooming four girls, including Carolyn, for Epstein to abuse between 1994 and 2004.

Maxwell's lawyers have said that her accusers' memories have been corrupted over the years, and that Maxwell is being scapegoated for Epstein's alleged conduct.

The globetrotting investor died by suicide in 2019 in a Manhattan jail cell while awaiting his own sex abuse trial.

Carolyn's case underlies Maxwell's sex trafficking charge, because she was allegedly paid for interactions with Epstein, and allegedly received gifts from Maxwell that were sent from a New York address to Carolyn's home in Florida. Carolyn said the encounters with Epstein began as massages before escalating.

Shawn, now 38, recalled travelling to Epstein's house with Carolyn for the first time with a girl named Virginia Roberts and Roberts's boyfriend after Roberts told Carolyn the pair could make money by giving "a guy a massage."

"She was excited to make money," said Shawn, who has not been accused of wrongdoing in the case.

He added that he and Roberts' boyfriend saw Roberts and Carolyn go into Epstein's home, waited for them for more than an hour, and saw them leave the home with hundred dollar bills.

Roberts, now known as Virginia Giuffre, is one of Epstein's and Maxwell's most prominent accusers, though she is not expected to testify in Maxwell's criminal case.

Shawn's account of that first trip largely matched up with Carolyn's version. After that first trip, Shawn said he drove Carolyn to Epstein's home every two weeks, and that Carolyn would leave with hundred dollar bills. They would use the cash to buy drugs, Shawn said, echoing his former girlfriend's statement on the stand on Tuesday.

When a prosecutor asked him why Carolyn did not drive herself, Shawn replied, "She was too young."

Shawn also recalled that Carolyn once received a package of lingerie from a New York address around the time she was meeting with Epstein. He said he also drove two other girls he was dating at the time, Amanda and Melissa, to Epstein's home.

Shawn said he never met Maxwell. He recalled Carolyn telling him about a woman named "Maxwell" whose first name she could not pronounce.

He said he sometimes received calls from Epstein employees seeking to schedule a massage appointment for Epstein with Carolyn, including from someone with an English accent who did not give their name.

Besides Carolyn, jurors have also heard from women known as Jane and Kate who said they were abused by Epstein as teens.

Prosecutors are expected as soon as Wednesday afternoon to call the fourth woman identified in Maxwell's indictment to begin testifying.